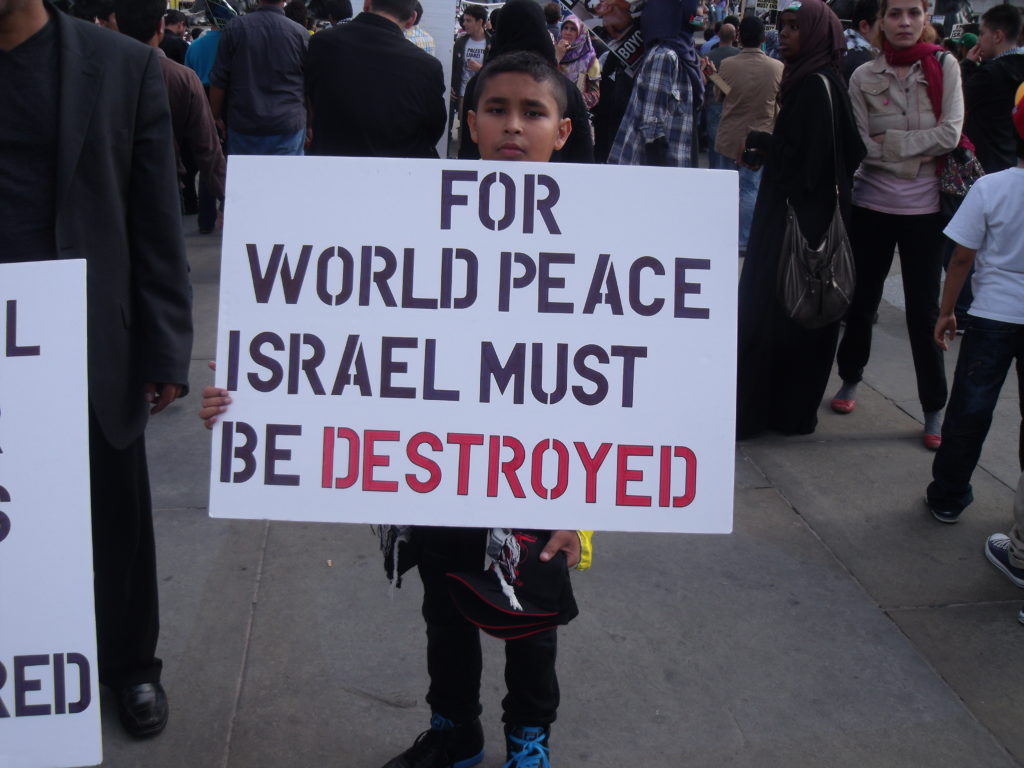 JULY: Should Amazon Redefine our Freedom of the Press?
Author Assaf A. Voll published a book titled “A History of the Palestinian People from Ancient Times to the Modern Era.” The book is over 120 pages and all of them are blank. His tongue-in-cheek approach to the hot topic of Palestinian history quickly garnered him a top seller position on Amazon (#2 in the “Israel and Palestine” category.) Enough people thought that it was funny and left reviews on Amazon to catapult the book to #2.
Apparently, many also were offended by the book’s approach to Palestinian history. His message was clear when it comes to factual history, Palestinians have none prior the mid-1960s. One might agree or disagree with that message, yet freedom of the press guarantees that Mr. Voll’s book will be published and distributed, even on Amazon…at least for a few days! Within a few days and under pressure, Amazon deleted the book from their catalog claiming that the book “has been retired and is no longer for sale.” The book cannot be found either on Apple iBooks or Barnes and Nobles site.
Books like “The Protocols of the Learned Elders of Zion” or Martin Luther’s 1543 work “On the Jews and their Lies” can easily be found on Amazon. The point here is that Amazon seems to be using double standards when it comes to anything promoting Israel and the Jewish people or denigrating the Palestinian narrative, and it is a shame. Freedom of the Press has to either be all in or all out. We cannot allow it to be adjusted according to different agendas or flexing under pressure from different groups.

AUGUST: Antifa joins BDS! What could possibly go wrong?
One group that has emerged around the time of Mr. Trump’s victory, was the group self-labeled as ” Antifa”,” an abbreviation for anti-fascist or anti-fascism. They seem to be reacting and protesting Trump’s every move and policy, labeling them as fascist at the core. They claim to fight racism, homophobia, sexism and capitalism. Antifa comprises people who would position themselves on the extreme Left, also known as Alt-Left.
Fascism became a real political influence in the early part of the 20th century in Europe. It was characterized by actions that reflected a rejection of communism, liberalism and anarchism. It is a strange political bird that can somehow be found flying across the spectrum from left to right–always adhering to a more totalitarian approach to government. Fascism has been notorious for the use of violence on property and people for intimidation and control.
Then comes “Antifa” to protest fascism.  The problem is that Antifa proponents are for the most part using methods of intimidation, silencing and protest that very strongly resemble the very methods they claim to oppose. They destroy property and use violence on people just like fascists. In their own way, they are becoming an Alt-Left brand of fascism. They use violence and intimidation which are the two main pillars of terrorism, and they should be labeled as such.

SEPTEMBER: Can We Prevent Another Holocaust?
While the Bible promises us that God will never forsake Israel (Jeremiah 31:35-37) it also tells us that God is just and disobedience will be met with discipline. From a human perspective, despots from many authoritarian countries would love to see Israel completely eradicated from the face of the earth, but from a biblical standpoint, not only will they fail, but they will also pay a hefty price (Zechariah 12:9). This doesn’t mean that they will not try, and try they have and they continue to. So, even though there might never be another Holocaust, Jewish casualties can escalate in the near future, and yet, we can all do our part to alleviate some of it by learning from the past and adjusting for the future. We need compassion, creativity, courage and commitment.
I often wonder what would the outcome of World War Two have been in regards to Jewish casualties if more people had had compassion, creativity, courage and commitment?  Not everyone could have been instrumental in saving 5,000 Jews or even 45 Jews. But what if more citizens of Europe had chosen to do something for the Jews as opposed to remaining bystanders at best?

OCTOBER: Why Did Palestine Really Joins Interpol?
Over the last few years, the Palestinian authority managed to get recognized by about fifty world organizations, including the United Nations, UNESCO and the ICC (International Criminal Court) only to name a few. The inclusion of Palestine as a “Non-Member Observer State” at the United Nations in 2012 solidified the obvious bias that the UN has had against Israel for several decades.
So it was only a matter of time before INTERPOL joined the others. Of the 192 countries belonging to Interpol, more than two-thirds voted in favor of the inclusion of Palestine. These were not only Arab countries. But to those who are interested in the facts, the integrity of the Palestinian Authority leaves a lot to be desired. Millions of donated funds have been used for the building of tunnels to infiltrate Israel illegally whenever possible and perform more acts of terrorism.
By admitting Palestine as one of their new members, INTERPOL exposes itself to a corrupt body more interested in the complete destruction of Israel than in any international police cooperation. How many of us really believe that the Palestinian Authority will ” ensure and promote the widest possible mutual assistance between all criminal police authorities” as stated in Interpol’s constitution. Instead, it will use its recent international vindication to further demonize Israel and the Jewish people.

NOVEMBER: The Balfour Declaration – A Thorn in the Flesh of Political Correctness!
The Balfour Declaration is a document that should have been foundational in the world’s recognition of Israel’s right for self-determination within the boundaries of her own historical and biblical land of Eretz Yisrael. It was followed by another equally important but lesser known agreement including the original Balfour text, known as the San Remo Resolution, where the Mandate for Palestine was drawn together (land boundaries were decided four years later.) As a result of the San Remo Resolution being drafted, Great Britain ended-up being responsible for the drawing of the Mandate and land boundaries for Palestine.
I cannot help but think of the different outcome we would have witnessed if Israel had been reborn out of the San Remo Conference of 1920 instead of 1948, but it was not part of God’s plan. Israel’s right to self-determination was agreed upon 97 years ago and shouldn’t be put in question. God remains sovereign over all. Much water has gone under that bridge since and history appears different today.
Many prophecies were fulfilled in 1948 when Israel was reborn. Here are some of these prophecies from the Tanach:

DECEMBER: The Blood Libel: A Twenty-First Century “Medieval” Myth Against the Jews
A broad definition of the Blood Libel is the following proposition: “The Jews would commit an official murder of a Christian, preferably a child, during Holy Week for ritual purposes.” More than 150 false charges of blood libel were recorded throughout history, resulting in the death of Jewish people (mostly during the Middle Ages). Some people even went as far as claiming that the collected blood of Christian children was used to make matzoh (the unleavened bread used for Passover.) The first claim of the Blood Libel recorded came out of Norwich, England, in 1141 as recorded in the Catholic Encyclopedia.
It continues to be propagated today, mostly in the Middle East by anti-Semitic Muslims indoctrinated early to hate the Jews. Occasionally, it resurfaces in places where we less expect it, as is the case of the recent events that took place in Eastern Europe in November 2017. A Russian bishop close to President Putin re-introduced the idea that Czar Nicholas II and his family were killed by Jews in a ritual murder. It is a historical fact that the chief perpetrator of Czar Nicholas II was Yakov Mikhailovich Yurovsky, who was Jewish. Yurovsky was a killer who happened to be Jewish and NOT a killer because he was Jewish. Additionally, there is no proof that the killing of Nicholas II and his family was a blood ritual any more than the very first accusation 876 years ago. Unfortunately, factual truth is not required when anti-semitism strikes, and it isn’t even required by those witnessing acts of anti-semitism.

Only God knows what 2018 will hold for the Jewish people, but when one looks at the global trends in antisemitism, one cannot help but expect more of the same. The burden is ours–people goodwill–to educate about, speak-up against and expose the venom of Jew hatred.