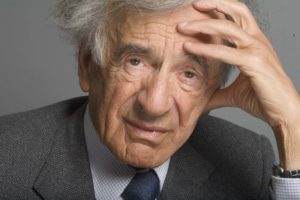 Eliezer Wiesel was born in 1928 in Romania. He was fifteen when he and his whole family were deported to Auschwitz. He spent most of his internment in the camps at Auschwitz and Buchenwald, with his father Shlomo. Elie Wiesel survived the horrors of the Holocaust. He was greatly motivated by the desire to take care of his beloved father who unfortunately died in Buchenwald just a few weeks before the liberation of that camp. One of his three sisters and his mother also perished in the camps. Elie had become a Holocaust survivor and an orphan at age 17.

Elie Wiesel passed away on July 2nd , 2016 at the age of 87. In a sense, the passing of this giant is the silencing of one voice who for six decades, as he continued to live through the nightmares of his gruesome experience, chose to perpetuate Holocaust memory in any way he could. He leaves behind him 57 books, too numerous to list or recommend here except for Night, written in 1960, that should be a must read for everyone. Night is Elie Wiesel’s Memoir of his time in the Death Camps with his father. Among the myriad of awards and recognitions that he accumulated over the years, Wiesel received the Nobel Peace prize in 1986. But to him, even in his last days, much remained to be accomplished to remember the past and alleviate a similar future.

To Wiesel, apathy or indifference was one the worst evil in the world.   That is exactly why he spent the bulk of his life educating a world in shock that later morphed into a numb world to eventually become the postmodern world in denial that it currently is. He once said “I decided to devote my life to telling the story because I felt that having survived I owe something to the dead. and anyone who does not remember betrays them again.”  He had always felt guilty of not being able to do more for his dad during their imprisonment in the camps. He felt that he didn’t deserve to live as he also wrote “that I survived the Holocaust and went on to love beautiful girls, to talk, to write, to have toast and tea and live my life – that is what is abnormal.”

Beyond a powerful legacy, he leaves us with a tremendous challenge. We must continue his fight.  If we remain silent, his voice will fade away into oblivion or worse, get relegated to a couple of statements about an event that many are already starting to doubt. The world cannot afford to be silent, apathetic or indifferent.

The Holocaust took place more than 75 years ago which means that any survivor still alive today would be at least 75 years old–as unlikely as it might be–if they were born in the camps. The average age of all holocaust survivors today is closer to 80. Logically, the 500,000 worldwide Holocaust survivors, will all be gone within ten years…and then what? I fear that beyond the respectful eulogies and posthumous accolades Wiesel receives, people will quickly move back to their busy lives and allow the revisionists and antisemites to win the next battle.

We must continue to educate people about the Holocaust. There are numerous Holocaust memorials and museum throughout the world, many of them in the United-States. The United States Holocaust Memorial Museum in Wasshington, D.C (whose founding chairman was Elie Wiesel) is one of them. Visit the one nearest you and make sure you accompany yourselves with some people from the next generation. This goes along with Wiesel’s statement that “Without memory, there is no culture. Without memory, there would be no civilization, no society, no future.”

We must also continue to speak up against any form of xenophobia, being antisemitism or any other kind. Wiesel came out of the camps barely alive, but he still had enough breath to keep fighting. He wasn’t only the ambassador of Holocaust remembrance, but also spoke against any and all ills rooted in racism. The current threat of a global annihilation of Israel and the Jews is very real. Europe is on high alert, Israel has been on edge since 1948 and the rest of the world can often be found on the forefront of the new antisemitism, blindly demonizing the Jews. Be aware and sensitive to what is happening in your own community and be responsive to defend and even lend a hand when needed. It is always appropriate to reach out and help those in need, even if they turn you down, your intentions will not go unnoticed.

In December 2015, the NGO Shurat Hadin – Israel Law Center, started an experiment on Facebook to see if the social Network giant was indeed guilty of double standards when it comes to Israel and the Palestinians. They decided to create two similar Facebook pages called “Stop Israel” and “Stop Palestinians” and started posting similar articles, visuals and statements on each site. For instance, the anti-Israel page had a post that read “The Zionist bites Palestine part after part and the world is silent. We’ll stop them any way we can”, while the anti-Palestinian site posted “Greater land Israel should return soon from the hands of the Muslim enemy back to Jewish sovereignty! We’ll do it in any way we can.”  More posts purposely filled with hatred and incitement against both sides and from both pages continued to flow. The verbiage was almost similar on all posts except for the obvious targeting of one side by the other. They actually documented the process in a two-minutes film where they show how Facebook shut down the anti-Palestinian page while the anti-Israel page continued to run. The NGO Shurat Hadin filed a law suit against Facebook and both side are awaiting a date for a court hearing.

This is not the first time that Facebook chooses to take sides. I have reported several pages over the last five years only to get the same answer from Facebook staff. That very answer was given to the Israel Law Center, justifying the taking down of the anti-Palestinian page because “We reviewed the page you reported for containing credible threat of violence and found it violates our community standards.”  The very same day, the page inciting against Jews received a message from Facebook staff saying that “ it was not in violation of Facebook rules.” Wait a minute, I thought that violence and hatred against anybody was to be reprimanded. The Facebook “Community Standards” that were violated on one page were IDENTICAL to those violated on the other page except of course for the fact that one targeted group was the Jewish people and Israel.

The sad truth about this experiment is that the vast majority of people won’t react because they are used to see Jewish people being harassed, abused and even physically hurt. There seems to be a sense of resignation, if not acceptance when Israel and/or the Jews get hurt, while there is an immediate display of outrage when Palestinians are targeted. Forget the fact that Palestinians and their leadership are almost always the instigators and Israelis the victims. Let us simply seek equality in the censorship of xenophobic websites and social network pages or accounts.

Consider Facebook pages such as  Images from Palestine, Image and Reality of the Israeli-Palestinian Conflict or Jewish Ritual Murder. They are replete with antisemitic rhetoric in pictures, videos and words, yet they are not taken down because they are “not in violation of Facebook rules.” Seriously?

Recently, Mark Zuckerberg –a self-proclaimed atheist from Jewish parents–declared his unequivocal support for Muslims worldwide in response to Donald Trump’s statement about closing US borders to all Muslims. He was quoted coming to the defense of Muslims after the November 2015 Paris attacks “As a Jew, my parents taught me that we must stand up against attacks on all communities. Even if an attack isn’t against you today, in time attacks on freedom for anyone will hurt everyone.” So I wonder if Mr.Zuckerberg forgot or ignored his recent statement that all of us should “stand up against attacks on all communities?” Maybe he doesn’t even know about the double standards applied to Jews and Palestinians on Facebook, although by now he has got to be aware of it all.

Then please explain why the anti-Israel page with virulent antisemitic statements was never removed? Regardless of where the double standard comes from, Facebook must be held accountable. The Israeli law suit might correct the recent wrong but it will not stop the next one and those thereafter.

I have used Facebook for years as a platform to share my thoughts, comments and articles. I value that platform because of its global reach. It has become such a part of our daily routine and social communication that it would be hard to refrain from using it. On the other hand, if you feel that there is a double standard in the treatment of Jews and Palestinians on the Social Network giant, speak up!

You can file complaints on Facebook’s Help Center and you don’t have to be Jewish, Muslim or anything else for that matter. You just have to be a proponent of truth, justice, fairness and accountability for all mankind. If we don’t say anything, we have no right to complain when Israelis are getting stabbed to death on the streets of Israel or French Jews machine gunned in a Kosher supermarket or any other xenophobic acts take place.