The Simon Wiesenthal Center in Los Angeles, California, is in possession of an original letter written and signed by Adolf Hitler in September of 1919, just days after he had joined the German Worker’s Party. This was 14 years before he would become Chancellor and take over Germany as a dictator. This letter was authenticated in 2011. In and of itself, a letter from a world leader of the past is a valuable piece of history, even if it doesn’t contain any important information, because it validates the very period it refers to. This letter is quite different. It is quite possibly the very first recorded use of the word “antisemitism” by Hitler. At least, it is the only one on hand. It is also a rare letter because Hitler and his core group of evil co-perpetrators went out of their way to communicate without leaving much in writing so that they couldn’t be accused of their crimes. There are several reasons why everybody should know about this letter.

The letter militates against Holocaust denial and revisionism: In the body of the letter, several references are made about the need to eliminate the Jews. Hitler doesn’t beat around the bush, even as early as 1919. He wrote “Its final aim, however, must be the uncompromising removal of the Jews altogether. “There is no way to look at such a statement and spin it in a way that would mean anything else but the desire to completely annihilate the Jews. Yet, many people around the world continue to claim that the Holocaust never happened, was grossly exaggerated or was simply some propaganda for Jews to steal and colonize “Palestine”.

The letter proves that Hitler had a desire to eliminate the Jews as early as 1919: While historians and scholars alike will continue to speculate on why Hitler was so possessed with killing all the Jews as fast as he could, nobody really doubts that he did. His goal would only exponentially increase over the next two decades as he continued to gain more power, even in the wake of the failed Beer Hall Putsch of 1923. Hitler then spent some time in prison where he would gather, structure and put down his genocidal agenda in “Mein Kampf”.

The letter proves that Hitler was not insane: We have to be very careful not to label Hitler and his lieutenants as insane. Insanity leaves the door open for people’s actions to be exonerated. It can be claimed that because of insanity, the party who acted was not really responsible. Hitler was NOT insane; he was evil and quite possibly demon-possessed; between which there is a big difference. The letter shows him being very coherent and methodical in his thinking, which is something insane people don’t usually have.  However, he doesn’t base his assessment of the Jewish people on facts.

The letter ignores that antisemitism is always wrong regardless of how it is justified: Antisemitism is the irrational hatred of the Jewish people characterized by thoughts, words and/or deeds against them. There is absolutely no justification for antisemitism. Hitler wrote, “Antisemitism as a political movement must not be, cannot be, determined by emotional criteria, but only through the recognition of facts.” First, he tries to peg antisemitism as a political movement, probably in an effort to distance himself and those who would follow his advice from being accused of xenophobia. Then, he insists that antisemitism cannot be an emotional reaction;  but should only be based on facts, setting the stage for his legalization of the destruction of all Jews – but are they real facts?

The letter is written on a foundation of lies called “facts”: It was fake news before fake news was even popular. He claimed that antisemitism was justified against the Jews, as long as it was not emotional but based on facts. The problem is that what he described as facts were misunderstandings at best and fabricated lies at worst. Hitler claims that “First, the Jews are definitely a race and not a religious community.” He failed to understand the difference between Judaism and Jewishness. Judaism is a religion based on the Old Testament and later the Talmud. It is followed more or less closely by Jews around the world depending on their level of orthodoxy, from secular/agnostic to ultra-orthodox. So, Judaism is something people follow, adhere to and practice out of their own volition. Jewishness, on the other hand, is something that one is born into. One or two Jewish parents will guarantee that you have Jewish lineage regardless of your adherence to Judaism. Jewishness is something that one is born with and can never lose. Judaism is a choice. They are two different sides of the coin of Jewish identity and cannot be mixed or blurred.

The letter includes the age-old lie about “the greedy Jew”: Expecting his audience not to know much about European history, Hitler accuses the Jews of being greedy and centering everything about wealth and monetary gain when he writes “The value of the individual is no longer determined by his character, by the importance of his achievements for all, but solely by the amount of his possessions, by his money.” Hitler possibly didn’t even know about the origins of this lie that goes back to the Middle Ages when Christians couldn’t borrow money from Christians and Jews couldn’t own property. Jews became money lenders, but as they charged interest, the rulers of Europe taxed them increasingly more and forced them to raise their interest rates to survive. The myth of the “Greedy Jew” was born and it lived through the ages and is alive and well today. Hitler insists that Jews do everything for money, “Everything which makes men strive for higher things, whether religion, socialism or democracy, is for him only a means to an end, to the satisfaction of a lust for money and domination. “

The letter sets the stage for the Nuremberg Laws of 1935: The Nuremberg Laws also known as the Reich Citizenship Law and the Law for the Protection of German Blood and German Honor were passed by Hitler and his government at the Nazi party meeting on September 15, 1935. When Hitler wrote “But antisemitism based on reason must lead to the systematic legal combating and removal of the rights of the Jew, which he alone of the foreigners living among us possesses (legislation to make them aliens), he declared that Jews had to be made aliens or foreigners in the midst of the German people. This was achieved after the Nuremberg Laws were passed and it greatly facilitated and justified the “Final Solution”

When one looks at how Adolf Hitler came to power, some call it “the perfect storm”. A weak post-war economy, a people desperate for recovery at any cost, even their own freedom, and a scapegoat. This letter clearly validates that the horrors of the Holocaust happened, and that Hitler was unashamedly behind it all. People’s rights and freedom are also at risk today. Such a letter goes beyond exposing Hitler’s intention as it serves to warn us that all that happened against the Jews could happen again, and not just against the Jews. 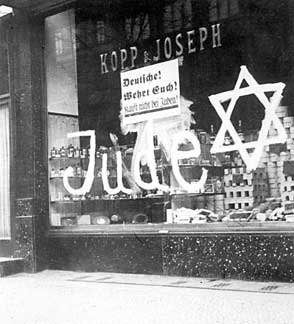 During the night of November 9-10, 1938, a critical event took place in Germany that would seal the fate of six million European Jews. That was 81 years ago. The event is known as Kristallnacht or “The Night of Broken Glass.” The reason given by the Nazis was the assassination of German official Ernst vom Rath, shot two days prior by Herschel Grynszpan, a Polish teenager reacting to his parents’ deportation. In reality, the boycott/pogrom of Jewish synagogues, schools, businesses and homes resulting in the death of almost 100 Jewish people and the destruction of 7,500 properties were well planned, and anything but a reaction to the death of a German official.  Additionally, 30,000 Jewish people were sent to concentration camps. Historians agree that Kristallnacht was the onset of the Holocaust, shifting nazi antisemitism from mere rhetoric to pure violence.
So, it is very important to remember Kristallnacht and tell our children about it, especially in light of current world events. We have seen an increase in acts of antisemitism worldwide, in several cases leading to the death of people in Europe and the United-States. Antisemitism is now becoming a reality almost on a daily basis. It can no longer be ignored, and yet in the eyes of many, it is not really that important of an issue. Too many people seem to suffer from the “I am not Jewish” syndrome!

In his book, Every Day Remembrance Day: A Chronicle of Jewish Martyrdom, the late Nazi hunter Simon Wiesenthal listed six major causes that could lead to another Holocaust:
1. Hatred (prejudice, racism, xenophobia or antisemitism).
2. A dictatorship or totalitarian regime.
3. A bureaucracy.
4. Technology.
5. A crisis, becoming an opportunity to blame people.
6. A scapegoat people such as a minority to demonize.

It should become very clear to us that in 2019 all the elements are in place again:
1. Antisemitism is at its worse since the end of World War Two with Jewish people being killed again.
2. Radical Islam is plaguing Western civilization and is now clearly starting to infiltrate various governments and hold key positions in Europe and the United States
3. Many people, especially on the left are relying on big government taking over and controlling more and more.
4. The internet and social media have rendered communication global and instantaneous.
5. Various economic hardships, demographics migrations and other crises are looming over the planet.
6. The Jewish people continue to hold first place as the “Scapegoats of humanity.”

The Boycott, Divestment and Sanctions movement is becoming mainstream. So mainstream that people don’t bother checking if any of its accusations are based on facts or fiction. People in Hollywood, in government and even in several Christian denominations are doing their best to cripple Israel and the Jewish people. They are not trying to bring justice to the middle east as they would want us to believe but rather, they want to completely eradicate Israel from “Palestine”.

This is why it is of utmost importance to remember Kristallnacht, year after year because the further we move away from 1938, the easier it becomes for deniers and historical revisionists to push their anti-Jewish propaganda onto an uneducated crowd, too often willing to blame the Jews. We are not immune to another Kristallnacht. In fact, I believe that we have been seeing a series of micro-Kristallnachts for the last several years. Every time we see a Jewish cemetery defaced, a synagogue covered with swastikas or other graffiti, or a Jewish storefront destroyed, we witness Kristallnacht all over again, and yet, people move on and forget.

The Kristallnacht of yesterday is anchored in history, but the Krystallnachts of today are being repeated in front of our very eyes with very little reactions from what seems to be an apathetic community. It is all in place for the Jews to pay the price again, except that in 2019 as opposed to 1938, we have Israel and we still have friends, especially within the evangelical community. I just wish they would be more vocal and more committed.