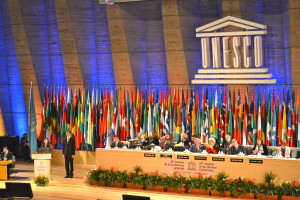 The United Nation Educational Scientific and Cultural Organization (UNESCO) was started in 1945 as some sort of “intellectual” agency from the United Nations. Their motto is “Building peace in the minds of men and women.” Over the last 70 years, they contributed to, enhanced and preserved our planet from many different perspectives. They indeed have done much good, but lately, as if possessed by the spirit of multicultural tolerance, political correctness and/or historical revisionism, they seem to be interested in throwing Israel under the bus.

Most people have forgotten or didn’t even know that in October 2011, UNESCO recognized Palestine as their 195th member country. Back then, I warned that this would only open the door to more damage done against Israel and the Jewish people. There is no Palestinian culture, history, language, customs or even foods. All of the above are Arab, not Palestinian. But the pro-Palestinian propaganda has been going for long enough for even an organization such as UNESCO to believe it. If Israel is indeed Palestine (which it is not!), then many if not all Jewish archeological and historical sites will become Palestinian/Muslim sites. That is part of the package of historical revisionism, first you lie about history, then fabricate a story to replace factual truth and finally expose the players within real history to a great danger because suddenly they have been delegitimized.

An agency founded on peace and justice for all is endorsing terrorism and violence and is in the process of  rewriting history. On their World Heritage List, UNESCO chooses to list the “Church of the Nativity and the Pilgrimage Route” as being in Palestine not Israel. But this shouldn’t come as much of a surprise when we see that since 1978, UNESCO has selected November 29th as “International Day of Solidarity with the Palestinian People”.

Then in 2012, UNESCO declared that the Jewish site of Rachel’s tomb was also a Christian AND Muslim site and that to say otherwise would be a hindrance to the peace process. Palestinians decided that the site was holy to them and was part of their heritage, even though Islam was only founded 1500 years ago. The site goes back way further than 1500 years and is mentioned in Genesis 35:19 as the place where the Jewish matriarch was buried. It has zero Palestinian connection!

To add insult to injury, UNESCO decided in 2013 that Israel and the United States–while retaining their membership–will lose their voting power because they had both stopped paying their dues after the 2011 inclusion of Palestine. I guess they [UNESCO] got a bit upset when the US contribution equal to 22% of their total budget stopped. I commend the United States and Israel for taking a stand in an age of cowardice and hypocrisy.

Finally, in what I see as another by-product of UNESCO’s historical revisionism of the last 40 years, they declared on April 15, 2016 that the Temple Mount, the holiest of Jewish sites had no Jewish connection. If you believe that, I have a bridge in Brooklyn to sell you–a bridge, I might add, that has no connection to America! (is that how historical revisionism starts?)

This didn’t go well with Benjamin Netanyahu who immediately and rightfully so declared “This is yet another absurd UN decision, UNESCO ignores the unique historic connection of Judaism to the Temple Mount, where the two temples stood for a thousand years and to which every Jew in the world has prayed for thousands of years. The UN is rewriting a basic part of human history and has again proven that there is no low to which it will not stop.”

One of my professor in Bible college years ago called it the “Salami Effect.” You take a people group, a country or a part of history, in our case Israel and the Jewish people and you start cutting away small truths about them. The slices are so thin that nobody really notices any changes. Eventually, one slice of factual truth at a time, you have delegitimized Israel and the Jewish people.

The last time that the Jewish people were delegitimized was during World War Two, when they were relegated to the status of vermin, virus or even sub-human. The result was the Shoah or Holocaust. If the Jewish people keep losing their land and their history, then they will once again lose their legitimacy as a people, and will be one step closer to being decimated again. Only days before Yom Ha Shoah on Nissan 27, we are reminded of the importance of factual truth!

These moves not only delegitimize Israel and the Jewish people, but hey also embolden her enemies. When Israel makes a legitimate claim, it runs the risk of being countered by people who now have been reassigned legitimacy. All this is being done with absolutely no historical foundation, simply in an attempt to weaken Israel. If factual truth mattered, UNESCO would obviously admit that the Temple Mount existed centuries before Islam was even born in 610 CE. Archeological and historical evidence are here to prove it and it should be exactly what the United Nation Educational Scientific and Cultural Organization uses to determine the legitimacy of historical sites. Why is it different for Israel? I think that once again the jewish state is a victim of the ills of double standards. So what exactly is UNESCO trying to accomplish in the Middle East? Are they really applying their motto “Building peace in the minds of men and women” to their actions? How could this possibly be the case?