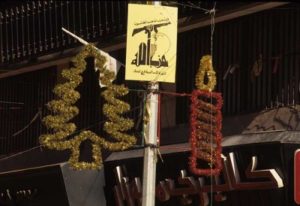 There are not that many countries in the world that wouldn’t define Hezbollah as a terrorist organization. We don’t need to look very deep into their methods to come to that conclusion. Hezbollah in Arabic means “the Party of Allah”. The group is considered to be a terrorist organization by many countries including the United States, Canada, Israel and even the Arab League. Iran, on the other hand, doesn’t worry about Hizbollah’s reputation as a terror organization, and as a matter of fact, has become a huge financial backer to the Lebanese organization, financing their armament and even the recent tunnels.

Currently, Hezbollah is digging terror tunnels on the northern border of  Israel akin to those built and used by Hamas to funnel terrorists underground from the Gaza strip to Israel. The IDF has been working hard to put a stop to these tunnels, including the destruction of several of them. They also discovered that the tunnels lead to urban areas on the Lebanese side, proving once again that one of the preferred methods of the terrorists, is to use civilians as shields for their operations. On one hand, the United Nations, always eager to pass one more resolution against Israel, is doing absolutely nothing about the tunnels. They have discussed them but have not taken any actions to put a stop to them. On the other hand, Benjamin Netanyahu is determined to do all in Israel’s power to destroy them in an effort to protect the country.

So it is clear that “Iran backed” Hizbollah is on a terror mission to destroy Israel, and yet they have received praise from the New York Times for their recent “Christmas spirit efforts”. In a tweet, they even stated “Even Hezbollah, the Shiite political movement and militia that the United States has branded a terrorist organization, has helped ring in the season in previous years, importing a Santa to Beirut’s southern suburbs to distribute gifts”.

Hezbollah is a Muslim organization at the core, and that means that Christmas has no place in their ideology. Whatever the reason for them to advertise a Christmas spirit and support of the Christian community is unclear, but that should never exonerate them for their crimes against humanity perpetrated in their numerous acts of terrorism. The “appearance” of one right absolutely cannot erase so many wrongs.

Personally, I have given up the hope of integrity from the New York Times for a while now. This is not even an issue of political leanings anymore but an issue of evil propaganda. I wish I could say that the reporters and journalists at the New York Times didn’t know any better, but what would that say about the state of journalism in 2018? Well, maybe it does?

Any time a media outlet, an NGO or a famous person endorse the actions of a terrorist organization out of ignorance or willful defiance, it emboldens the terrorists to do more damage. It softens their image to a world that already doesn’t look for factual truth anymore. So the world concentrates on the false positive about Christmas in Lebanon with Hezbollah and completely misses the real issue.

Propaganda worked well for the Nazi war machine. They made the world believe that Jews were going to nice camps where children played together and stayed with their families, like in the staged location at Theresienstadt. Within days after the International Red Cross came to visit the “ideal” camp and give a positive report to the world, the children were sent to gas chambers.

Propaganda works best when the receiving party can be deceived. The world today is easily deceived by the media, political entities and even famous personalities all in the name of social justice. This recent article by the New York Times is propaganda promoting an organization that only has the complete destruction of Israel on their radar. There is fake News, and then there is propaganda! Nothing less than full retraction will work in this case, but who am I fooling?