Home » Light of the World 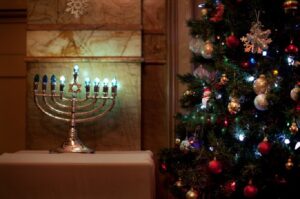 So, last week, I made the statement: “There wouldn’t be Christmas if it wasn’t for Hanukkah!” It sounded a bit controversial if not oxymoronic. We looked at the historical, biblical and modern aspects of Hanukkah, the Feast of Dedication also known as the Festival of Lights. Much of the background for the story of Hanukkah can be found in the book of Daniel as Antiochus IV Epiphanes rose to power, outlawed Judaism and murdered Jewish people. Eventually, through the Maccabean revolt, the Jewish people regained control, rededicated the Temple and were free to practice Judaism again. I also promised you that I would explain the correlation between the Feast of Hanukkah and the Jewish Messiah.

It is crucial to understand that throughout our history, several attempts have been made to completely eradicate our people. It goes back to the third chapter of Genesis when Satan realized that the Messiah would be coming from the seed of the woman (Genesis 3:15), eventually learning that He would be from the tribe of Judah (Genesis 49:10) and the line of David (2 Samuel 7:16-17; Psalm 89:34-37.) In other words, the Bible promises beyond the shadow of a doubt that the Messiah would be a Jew in His humanity. If Satan wanted to thwart God’s plans to bring the Jewish Messiah on the world’s stage and secure his job of the great deceiver, the best way would be to completely decimate the Jewish people and put an end to the Jewish race, something that God promised would never happen in (Jeremiah 31:35-37.) But Satan should know better than that!

This is God’s way of saying that nothing can be done to completely eliminate the Jewish people from the face of the earth, “Thus says the LORD, Who gives the sun for light by day And the fixed order of the moon and the stars for light by night, Who stirs up the sea so that its waves roar; The LORD of hosts is His name: “If this fixed order departs From before Me,” declares the LORD, “Then the offspring of Israel also will cease From being a nation before Me forever.” Thus says the LORD, “If the heavens above can be measured And the foundations of the earth searched out below, Then I will also cast off all the offspring of Israel For all that they have done,” declares the LORD.” Notice that God mentions at the very end that even Israel’s disobedience and idol worshipping couldn’t deter Him from preserving the Jewish people. In other words, their preservation is not depending on their performance, but on God’s character only. What a promise!

Several biblical characters were used by Satan to further his destructive agenda. The Pharaoh who didn’t know Joseph decided that all Jewish newborn males should be killed, and as retold in the book of Esther, Haman wanted Mordechai and the rest of the Jews of the kingdom to be killed. Incidentally, as an example of the promise God made in Genesis 12:3, “And I will bless those who bless you, And the one who curses you I will curse”, all the first-born of Egypt were decimated as the result of the 10th plague against the Egyptians before the exodus of the Jewish people towards the Promised Land. Additionally, Haman and his sons ended up hanging on the very gallows that he had built for Mordechai. God’s covenantal promise to preserve the Jewish people, protect us and provide for us was strong then and it is strong now because God means what He says and says what He means.

So, when the events that led to the Feast of Hanukkah took place, even though many Jewish people tragically lost their lives, God wasn’t caught off guard and He had not changed His mind. Once again, the Jewish people prevailed, or more accurately, God prevailed on behalf of His people Israel. By the way, I often say that anyone who doesn’t believe in God should look at the history of the Jewish people, our preservation and growth against all odds. We shouldn’t exist if it wasn’t for God’s grace and His eternal, irrevocable covenantal promises (Romans 11:28-29), “From the standpoint of the gospel they are enemies for your sake, but from the standpoint of God’s choice they are beloved for the sake of the fathers; for the gifts and the calling of God are irrevocable.” God Has always known that the Messiah would come through a Jewish family and this was not about to change. If the Jewish line was interrupted at the time of the Maccabean Revolt, the Messiah couldn’t have been born and this why we can say with certainty and with hope, “There wouldn’t be Christmas if it wasn’t for Hanukkah!” It has always been God’s timing.

It is God who originally set the stage for the arrival of the Messiah, not a minute too soon and not too late either, “But when the fullness of the time came, God sent forth His Son, born of a woman, born under the Law” as Paul tells us in Galatians. Here again, it is confirmed that in His human form, Messiah would be born “under the Law”, another way to mean that He would be a Jew.

The Bible also promises us that the Messiah would be a light to the nations. The theme of light against the darkness shouldn’t be missed. The prophet Isaiah tells us, “I am the LORD, I have called You in righteousness, I will also hold You by the hand and watch over You, And I will appoint You as a covenant to the people, As a light to the nations.” Speaking for God, he continues,  “It is too small a thing that You should be My Servant To raise up the tribes of Jacob and to restore the preserved ones of Israel; I will also make You a light of the nations So that My salvation may reach to the end of the earth.”

I find it fascinating that the prominent candle on the Hanukkah menorah, known as the shamash or “servant” candle, is the one that we light first and then use to light all the other candles. The servant brings light to all the others and adds light to fight the darkness. At the very least, I see some similarity with Yeshua the Messiah Who came as “the Servant of the Lord” to bring light to a very dark world. We read about the Servant in four passages in Isaiah: Isaiah 42:1–4; 49:1–6; 50:4–7; and 52:13–53:12.

The most poignant and life-changing passage is probably Isaiah 52:13–53:12 where the Servant is seen as being humiliated, suffering, and innocently killed for his own guilty people. This will remind anyone with an open mind of the fate of the servant of the Lord, Yeshua, who came to be a light to us all but ended-up being crucified for us all. Years later, in the context of the Feast of Sukkot (Tabernacles), He even stated that He was that light in John 8:12, ” Then Yeshua again spoke to them, saying, “I am the Light of the world; he who follows Me will not walk in the darkness, but will have the Light of life.”

But maybe even more important than the light He is and He brings, Messiah also brings deliverance which is another important theme found in Hanukkah. The Jews were delivered from Antiochus’ oppression and tyranny by the grace of the Almighty. Today, all people can be delivered from the tyranny of the enemy and our doomed destiny by trusting the Messiah and His finished work. The many miracles told in the book of Acts are a testimony to the atoning work of Yeshua on our behalf, for Jews and Gentiles alike, “rescuing you from the Jewish people and from the Gentiles, to whom I am sending you, to open their eyes so that they may turn from darkness to light and from the dominion of Satan to God, that they may receive forgiveness of sins and an inheritance among those who have been sanctified by faith in Me.

It is so refreshing to know that the light of the world came to pull us all out of darkness, but we have to believe what He did on our behalf as John tells us, “Therefore I said to you that you will die in your sins; for unless you believe that I am He, you will die in your sins.” It should lead us to a desire to dedicate or re-dedicate our lives to God as we are advised in Romans 12:1-2, ” Therefore I urge you, brethren, by the mercies of God, to present your bodies a living and holy sacrifice, acceptable to God, which is your spiritual service of worship. And do not be conformed to this world, but be transformed by the renewing of your mind, so that you may prove what the will of God is, that which is good and acceptable and perfect.”

Of course, dedication is also a theme that is part of the Hanukkah story as the Jewish people worked hard at cleaning the Temple and re-dedicating it with freshly pressed olive oil for the menorah while as the story tells us, the one-day reserve of oil burned for 8 days until more oil was available.

Re-dedicating our lives should really be a daily event. Each morning we ought to speak to God and offer to Him our day dedicated to His glory in everything we think, say or do. It is a great way to start our day and to stay focused on what is important.

As if all these parallels between Hanukkah and the Messiah weren’t enough, one of the best-kept secrets of the Bible is the fact Yeshua Himself recognized and celebrated Hanukkah in Jerusalem, ” At that time the Feast of the Dedication took place at Jerusalem; it was winter, and Yeshua was walking in the temple in the portico of Solomon” (John 10:22-23.)

Happy Holidays to you all!