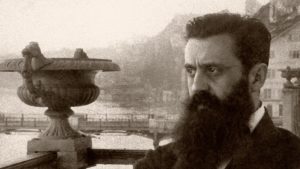 The terms “Zionism” and “Zionist” were coined in 1890 by Jewish activist Nathan Birnbaum (1864-1937), who also played an important part in the first Zionist Congress held in 1897, (and renamed the World Zionist Organization in 1960) alongside its first president, Theodore Herzl. The word Zion comes from the Hebrew tzion, a reference to Jerusalem and often, by extension, to the Land of Israel itself (first mentioned in II Samuel 5:7.)“Nevertheless, David captured the stronghold of Zion, that is the city of David.”According to scholar Mitchell Bard, Zionism is: “The national movement for the return of the Jewish people to their homeland and the resumption of Jewish sovereignty in the Land of Israel.”One doesn’t need to peruse the news for too long before reading or hearing about Zionism. So, it becomes necessary to go back in history to understand how Zionism came about.

European Jews had suffered at the hands of many popes, kings, and the masses since the Early Church Fathers. Anti-Semitism, in many shapes, from theological to social to ethnic, had punctuated Jewish life throughout the centuries, limiting if not eliminating any semblance of normalcy within the Jewish communities of Europe. The Crusades, the crushing hatred unleashed by false claims of blood libel against the Jewish people, the 1492 Spanish Inquisition and the creation of the first Ghetto in Italy in 1516, to name a few, were ominous milestones of terror against the Jewish people on the timeline of Jewish history. It would eventually get much worse, with the Russian pogroms (massacres occurring during fomented riots against the Jews in the Ghettos and the shtetls) and the Holocaust (1933-1945), a systematic extermination in which six million Jews were murdered by the Nazis.

After all this persecution and devastation, something had to change. Jewish people felt they had to “leave the Ghetto” not just physically, but spiritually and emotionally as well. In the midst of their misery, the Jewish people saw a ray of hope with the advent of the Haskalah. The Haskalah, also known as the Jewish Enlightenment, was a movement among European Jews of the 17th and 18th centuries advocating a more secularized way of life, hopefully leading to their emancipation and thus better integration into a non-Jewish society. Moses Mendelssohn (1729-1786) was a German-Jewish philosopher and the father of the Haskalah. The result of the Haskalah was a new emphasis on Jewish culture and history, much of it apart from religion. It was adapted to various Jewish communities across Western and Eastern Europe. For a short while, there seemed to be a period of respite for the Jewish people. Emancipation was working, or was it?

In 1894 France, at a time when Jewish people thought that their emancipation had prevailed, an event occurred that interrupted that hope. French Alsatian Jew, Captain Alfred Dreyfus, was accused of treason against the French Government. In a vitriolic explosion of hatred, anti-Semitism appeared once again in the treatment of Captain Dreyfus and the spillover to the French Jewish people in general. Mobs took to the streets of Paris, screaming, “Death to the Jews!” Even though Captain Dreyfus was later cleared and even fully reinstated in 1906, the climate had changed in France. In a sense, what is today still known as the Dreyfus Affair, was the catalyst for conceiving of and pursuing Zionism.

A Vienna newspaper sent their Paris correspondent, Hungarian journalist, Theodor Herzl, to cover the Dreyfus Affair. To be sure, Herzl’s obsession with Jewish existence in a land of their own predated the Dreyfus Affair. But it is the very treatment of Captain Dreyfus and, by association, the Jews of France, that prompted Theodor Herzl to compile his work of several years into the historic pamphlet Der Judenstaat or “The Jewish State,” published in Vienna in 1896 in which he stated: “Palestine is our unforgettable historic homeland.…Let me repeat once more my opening words:  The Jews who will it shall achieve their State. We shall live at last as free men on our own soil, and in our own homes peacefully die. The world will be liberated by our freedom, enriched by our wealth, magnified by our greatness. And whatever we attempt there for our own benefit will redound mightily and beneficially to the good of all mankind.” Herzl was convinced that the only viable solution was a mass exodus of the Jews of Europe back to Israel, the land of their ancestors, as he further stated: “Political principle will provide the basis, technology the means and the driving force will be the Jewish tragedy.” Theodor Herzl, if not the originator of the concept of Zionism, was definitely the visionary, catalyst and leader of political Zionism. Let me just remind all of us that the word Palestine is used in this article ONLY as the name for the geographical area known as Israel, prior to 1948.)

So, Herzl started lobbying for the Jewish people’s return to a safe land of their own. He first met with German Kaiser Wilhelm II in Istanbul in 1898 in an effort to convince him to help secure land in Israel. But Herzl wasn’t taken very seriously; and the Kaiser, influenced by his own anti-Semitic tendencies, flatly rejected Herzl’s appeals for a Jewish homeland. Disappointed and frustrated but not discouraged, Herzl met with British Colonial Secretary Joseph Chamberlain who, as a compromise, offered the Jews the country of Uganda in Eastern Africa. Eventually, in 1903, during the sixth Zionist Congress, and by now rather discouraged, Herzl proposed the move of the Jewish people to Uganda, as a temporary solution until Palestine could be secured. The Jewish people who followed his leadership reacted immediately and, at the sight of a possible split within the Zionist movement, Herzl decided against the compromise Herzl died a year later in Vienna at age 44, having spent most of his adult life fighting for a Jewish homeland.

In Vienna in 1897, he had said, almost prophetically: “At Basle I created the Jewish State. In five years, perhaps, and certainly in fifty, everyone will see it.” It is exactly 50 years later in November 1947, that the United Nations officially voted for the partition of British Mandate Palestine, later to become Eretz Yisrael on May 14, 1948. One could argue that during Herzl’s life, Zionism was mainly a political movement relying on diplomacy for any sustainable existence. But even Herzl saw that “political Zionism” and “practical Zionism,” while having the same goal, had different methods. The chasm would divide further as the Jewish homeland became more of a reality. Herzl had worked hard at gathering funds, yet they hadn’t been disbursed significantly, and a move from the theoretical to the practical was necessary. Additionally, there was a serious push for a Hebrew renaissance. The idea of a “cultural Zionism,” mostly introduced by Russian Jews, appealed to a wider spectrum within the Jewish community; while “political Zionism” left many of the more religious leaders unsatisfied and unable to relate to the cause.

A key player who had not always seen eye-to-eye with Herzl was Russian Jewish essayist, Asher Ginsberg (1856-1927), who went by the pen name of Ahad Ha’am, Hebrew for “one of the people.” Ha’am is known as the father of “cultural Zionism,” and his vision was “a Jewish State and not merely a State of Jews.” He felt that Jewish people should return gradually to Palestine while Diaspora Jews should be given a vision of the new homeland making them jealous and thus drawing them to a move. Another important figure in the fight for a cultural rebirth was Hebrew Lexicographer, Eliezer Ben-Yehuda, who immigrated to Israel during the first Aliyah of 1881, and dedicated the rest of his life, not without tremendous hardship, to the rebirth of Hebrew as a modern tongue.

Robert St. John, Ben Yehuda’s biographer, wrote of him in Tongue of the Prophets: “In twenty years he had fathered ten children. Five had died but five still lived. Two of them spoke fluently the language he had spent so much of these twenty years trying to bring back to life. More important, the streets of Jerusalem, the market places, the villages scattered over the desert were thronged with other Jews who spoke this same revived language.”

In the decade following Herzl’s death, Zionist influx continued in the Holy Land, and about 100,000 pioneers lived there. Times were hard, workdays were long, and poverty was rampant; but the spirit of hope kept Zionism alive. On the eve of World War One, Zionism had become a reality; a fragile one, but a reality, nonetheless.