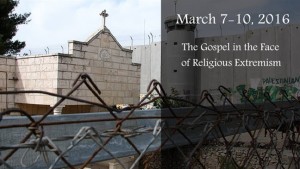 On March 7-10, 2016, the fourth “Christ at the Checkpoint (CatC) Conference will take place in Bethlehem. The 2016 theme will be, “THE GOSPEL IN THE FACE OF RELIGIOUS EXTREMISM.” From their own website, they give the world their mission that is: “ The mission of “Christ at the Checkpoint” is to challenge Evangelicals to take responsibility to help resolve the conflicts in Israel/Palestine by engaging with the teaching of Jesus on the Kingdom of God.”

This sounds really commendable at a time when the whole Middle East seems to be sitting on a powder keg with a very short fuse. Biblically speaking, anything done in the name of Yeshua and following His teaching should lead to peace and turning the other cheek. Furthermore, the leadership of CatC claims that, “The conference will bring Palestinian and international Evangelical leaders, to study and explore the rise of religious extremism within Christianity, Judaism, and Islam and how this impacts the Israel/Palestine conflict. We will also explore what the Bible has to say about religious extremism in any form. Together, we will seek a Biblical response to religious extremism, and find ways that provide an alternative through living out the kingdom of God. “

Their mission appears to deal with any form of extremism within Christianity, Judaism and Islam. In and of itself, this year’s conference seems balanced and very informative, but the problem is that CatC conferences build every two years on the work accomplished by the previous conference(s), and as such, CatC has gained a reputation that increasingly lacks ethical stability. The first three conferences were all advertised under the banner of “reconciliation” but at the end of the day, each one resembled more a witch hunt against Israel than a dialogue to find a healthy compromise. Unfortunately, many evangelicals are blinded by Palestinian victimhood rhetoric.

Much could be gleaned from the CatC Manifesto, for which I wrote a review in 2012. Back then I recognized that it included some truths, half-truths and lies, all mixed. So I looked at each of the 12 articles carefully. It is well worth reviewing again.

1. The Kingdom of God has come. Evangelicals must reclaim the prophetic role in bringing peace, justice and reconciliation in Palestine and Israel.
DISAGREED: Kingdom Now Theology claims among other things, that Yeshua’s Kingdom was inaugurated at His first coming while Scripture states that He will reign as Messianic King on the throne of David from Jerusalem in a yet to come Millennial Messianic Kingdom (Psalm 72:8, 11, 17; Isaiah 9:7, 11:6-11; Jeremiah 23:6, Zechariah 3:10).

2. Reconciliation recognizes God’s image in one another.
AGREED: God created man and woman in His image, regardless of ethnicity. (Genesis 1:27; 5:1; 9:6; 1 Corinthians 11:7; Ephesians 4:24). Although inviting blatant anti-Israel speaker like Stephen Sizer defeated that purpose.

4. The Church in the land of the Holy One, has born witness to Christ since the days of Pentecost. It must be empowered to continue to be light and salt in the region, if there is to be hope in the midst of conflict.
AGREED: Yeshua’s last command to His disciples was to make disciples of ALL NATIONS (Matthew 28:18-20; Luke 24:47)

5. Any exclusive claim to land of the Bible in the name of God is not in line with the teaching of Scripture.
DISAGREED: The land of Israel belongs to God Himself (Leviticus 25:23). He chose to make a covenant with Abraham that would include that piece of land as an eternal AND unconditional part of that covenant. Additionally, God’s gifts are irrevocable (Romans 11:29).

6. All forms of violence must be refuted unequivocally.
AGREED: Yeshua always taught peace between His followers and unbelievers as much as possible, making Christianity a most unique faith were disciples of Messiah must EVEN love their enemies (Matthew 5:39-48; Luke 6:27-35, Romans 12:17-21.) The participation of a Hamas sympathizer at the 2016 conference is directly opposed to the statement made in article 6.

7. Palestinian Christians must not lose the capacity to self-criticism if they wish to remain prophetic.
AGREED: In any conflict, ALL parties must be willing to recognize fault and prepared to adjust accordingly. (Proverbs 18:12; Ephesians 4:2; Philippians 2:3; Colossians 3:1-17.)

8. There are real injustices taking place in the Palestinian territories and the suffering of the Palestinian people can no longer be ignored. Any solution  must respect the equity and rights of Israel and Palestinian communities.
PARTIALLY AGREED AND DISAGREED: While mutual respect of human beings as being made in God’s image is at the core of peace and reconciliation, what is meant by “injustices in the Palestinian territories” remains to be defined. (Genesis 1:27; 5:1; 9:6; 1 Corinthians 11:7; Ephesians 4:24.) The further we advance in history, the more accepted the Palestinian narrative becomes. Unfortunately, it is not founded on historical facts but purely fabricated. Please don’t take my word for it, take the time to study the facts!

9. For Palestinian Christians, the occupation is the core issue of the conflict.
PARTIALLY AGREED AND DISAGREED: While nobody enjoys living in a land that they feel is theirs and yet is occupied by a foreign people group, it remains to be proven biblically that Jewish people are the occupiers. All previous Scriptures cited about the land lead to an opposite view (See verses under points 3 and 5).

10. Any challenge of the injustices taking place in the Holy Land must be done in Christian love. Criticism of Israel and the occupation cannot be confused with anti-Semitism and the delegitimization of the State of Israel.
AGREED: While it is possible to disagree with Israeli policies, much of what has been labeled as anti-Israelism or even anti-Zionism has really been antisemitism in disguise. Genuine Christian love is at the core of any reconciliation and is irrespective of color or race. (2 Corinthians 5:14; Ephesians 3:19; Colossians 3:14). CatC continues to invite a plethora of speakers who are very good at pointing the finger at Israel “the occupier” and “apartheid state”, but rarely do they speak of radical Islam, terrorism and/or antisemitism.

11. Respectful dialogue between Palestinian and Messianic believers must continue. Though we may disagree on secondary matters of theology, the Gospel of Jesus and his ethical teaching take precedence.
PARTIALLY AGREED AND DISAGREED: Respectful dialogue means that both sides must be heard and both sides must listen. Agreeing on the Gospel of Yeshua doesn’t negate God’s covenants with the Jewish people (Romans 1:16; 9-11.) Even the recent “Larnaca Document” signed in Cyprus between Palestinian Christians and Messianic believers sounds more like a trap than a true breakthrough. For instance, in their article 2.2, both parties agree to disagree on what constitutes lethal violence. Seriously? So Israel’s counter-terrorism actions against Hamas should be seen as one version of “lethal violence” on equal footing with Hamas bloody terrorism?

12. Christians must understand the global context for the rise of extremist Islam. We challenge stereotyping of all faith forms that betray God’s commandment to love our neighbors and enemies.
AGREED: While again I find the statement misleading as it could be taken to mean that there is a justification for radical Islam’s violence, I agree that Christian love is always to be the foundation of any lasting peace and reconciliation (See verses under points 6).

So this year, more evangelicals are joining the CatC ranks. People like “Bible Answer Man” Hank Hanegraaff. I used to listen to Mr. Hanegraaff when I was a young believer, what a disgraceful theological shift. One wonders if he is he still using the same Bible since he is not seeing Israel in the plan of God anymore? But there are so many other people that are taking center stage at CatC 2016 in the name of Christian love and reconciliation and yet, they clearly show bias against Israel and in some cases hatred.

• Jack Sara claims that he lives in Jerusalem, Palestine
• Jonathan Kuttab recently tweeted that we should no longer consider Hamas a terrorist organization
• Salim Munayer claimed that the many tunnels built by Hamas were mostly to carry food and drinks.
• Mustafa Abu Sway has written books used by Hamas and is known as an Islamist.

So forgive me for not getting too hopeful about the fourth iteration of “Christ at the Checkpoint.”  I think that it is progressively getting worse. How can we possibly speak of Christian love, justice and reconciliation with such a line-up of hypocrites at best and antisemites at worst?

Instead of watching the conference online and be indoctrinated by a false narrative, you would better spend your time watching a series of videos directed by my dear friend Perry Trotter from New Zealand. The site is Evangelical Zionism and it divides into seven videos for a total of 45 minutes very well spent. I really wish that the speakers and attendees of CatC 2016 would spend that 45 minutes watching these videos, then I would be hopeful that we possibly could have a balanced dialogue. Unfortunately, I think that CatC has now gone too far. Sadly, many evangelicals do not see it that way!