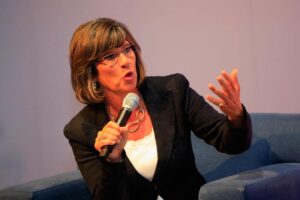 It is one thing to expose the vile monster of global antisemitism week after week, but beyond the exposure, we must make an effort–at least individual if not corporate–to fight it. As a result of our voices and actions, in some cases, we can nip it in the bud or even reverse it. An encouraging–and yet limited– example of this, is what happened at CNN a few days ago in a statement made by senior anchorwoman Christiane Amanpour. My intention is not to freely bash Ms. Amanpour, but rather to analyze her statement and apology in the scope of the current rise in antisemitism.

During the second week of November, she made this statement, ” This week 82 years ago, Kristallnacht happened. It was the Nazis’ warning shot across the bow of our human civilization that led to genocide against a whole identity, and in that tower of burning books, it led to an attack on fact, history, knowledge and truth. After four years of a modern-day assault on those same values by Donald Trump, the Biden-Harris team pledges a return to norms, including the truth.”

She received a lot of criticism and days after, at the end of her program, she issued this apology, “and finally tonight, a comment on my program at the end of last week. I observed the 82nd anniversary of Kristallnacht, as I often do. It is the event that began the horrors of the Holocaust. I also noted President Trump’s attacks on history, facts, knowledge and truth. I should not have juxtaposed the two thoughts. Hitler and his evils stand alone, of course, in history. I regret any cause my statement may have caused. My point was to say how democracy can potentially slip away, and how we must always zealously guard our democratic values.”

Much was said in those two short statements. First, I must commend Ms. Amanpour for remembering the defining events of Kristallnacht. As a Jew who lost members of my family in the Holocaust, I make a point of remembering AND telling the current and future generations about the atrocities of Kristallnacht and how it triggered the Holocaust. Beyond the initial acknowledgment though, the statement quickly turned caustic. I find it interesting that Ms. Amanpour spoke of genocide against a whole identity, but couldn’t see herself using the words “Jews” or “Jewish.” It seems that whenever used in a positive context or to describe victimhood, people seem to shy away from such words, but when needed to describe “crimes against humanity”, “occupation of Palestinian land” or “colonization”, the word easily roll off one’s tongue. Another case of double-standards?

She was spot on, about the genocidal agenda, but she could only speak of an “identity” and a tower of burning books. The reality was that thousands of buildings, including many synagogues, were leveled, not to mention the death of over 100 Jewish people. But then, Ms. Amanpour described the massacre as “an attack on fact, history, knowledge and truth.” While there is an element of truth in that statement, it looks like these values were listed to facilitate a connection between Nazi ideology and Trump policies–a connection that is truly NOT based on fact, history, knowledge and truth. The fact is, Kristallnacht was an organized pogrom and boycott against the German Jewish community. It was all about the genocide of European Jewry. Her words appeared to be an attempt at minimizing and distorting the Holocaust.

The facts are that no other US administration has done more for Jewish people and other minorities than this current one. But was seems to be implied here is that President Trump has been leading an attack on fact, history, knowledge and truth against Americans across the board. This is a view that, while promoted by much of the more liberal media outlets, doesn’t justify comparing President to Hitler and his genocidal agenda.

Ms. Amanpour almost immediately received a lot of criticism from across various communities and issued an apology within a couple of days. The people spoke up and called CNN which resulted in the aired apology. Was she compelled, led, or forced to do so we do not know, but her apology was almost as damaging as her initial libel. She properly summarized Kristallnacht as “the event that began the horrors of the Holocaust” and even though she clearly said that she should have not compared Trump to Hitler, she still equated Trump’s policies to “attacks on history, facts, knowledge and truth.”

My concern is that Ms. Amanpour’s statement has graver consequences than a statement followed by an apology. It is a symptom of a deeper problem that I have tried to expose in the past. I see four issues in that apology:

• Her diatribe was not an isolated incident: She regularly accuses Israel of crimes not committed, based on her personal wrong assumptions about history and the geopolitical situation in the Middle East. She has gone as far as calling Jewish people terrorists and children murderers in 2008 on CNN when, in an interview, she stated “And, although the number is small, there are terrorists — Jewish terrorists, including some who would even kill Palestinians children.”

• Her diatribe unequivocally exposes her real mindset:  I have said this before, the very fact that someone would be willing to make such comments about the Jewish people, or any other people for that matter, shows that it is part of their mindset. It is always good when they apologize, but these apologies are usually short-lived and often overshadowed by the next libel. The very fact that Ms. Amanpour thought to compare President Trump to Hitler is the bigger problem.

• Her apology was only skin deep:  Ms. Amanpour probably got called in by her boss and asked to issue some kind of an apology to preserve ratings and control the justified ire of the Jewish community and of many other people of goodwill. Her half-baked apology didn’t sound sincere, and that is very sad.

• Her words don’t seem to put her job in jeopardy:  Outside of this recent half-baked apology, claiming that she regretted having made her comments, her repeated diatribes have not been taken back or even put her CNN anchor’s position in jeopardy. She has repeatedly denigrated Israel and promoted the Palestinian narrative with no consequences affecting her job.

At the end of the day, I still think that it is a good thing that her libel was exposed for what it is and that she was forced to issue a statement of apology. Even if she wasn’t sincere, she needed to be exposed for her ignorance of history–willful or not– and blatant antisemitism.

• We must teach historical truth to others, especially our children and regardless of how uncomfortable any part of history was.

• We must show our Jewish community support when they are being attacked either verbally or physically.

• We must refrain from character assassination as retribution, no matter how frustrated and angry we might become.

• We have to stop believing that this doesn’t concern us if it is not directly affecting us personally.

• Ignorance should never be used as an excuse, especially in the age of instant communication.

• We cannot remain silent on the assumption that one voice will not amount to anything.

The Bible is actually clear about this as we read in Proverbs 24:10-12, “If you are slack in the day of distress, Your strength is limited. Deliver those who are being taken away to death, And those who are staggering to slaughter, Oh hold them back. If you say, “See, we did not know this, Does He not consider it who weighs the hearts? And does He not know it who keeps your soul? And will He not render to man according to his work?”

Not to speak is to speak, not to act is to act, and to look the other way turns us into co-perpetrators. We all have a choice! 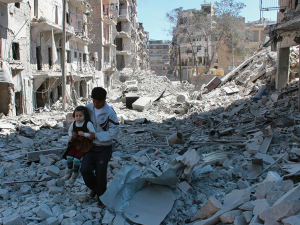 So Obama let Syria burn. He let Iran and Hezbollah transform the country into their colony. And he let Putin transform the Mediterranean into a Russian lake.

More than 30,000 people from “countries of terrorist concern” illegally entered the United States across the southern border with Mexico in 2015, says a U.S. Southern Command intelligence report.

National security officials in Washington are now increasingly concerned ISIS may be working to get jihadists into the U.S. using Latin American smuggling networks.

16 years after the failed Camp David summit, the fiction of the two-state solution is about to be shattered once and for all. The only relevant question today, is what does Israel intend to do next?