Home » Blog » Kristallnacht and the Temple Mount: What Can They Possibly Have in Common?
Spread the love 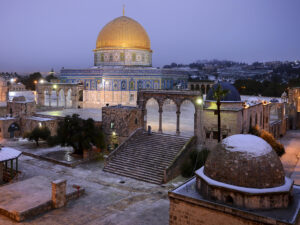 Sometimes when I look at the history of Israel and the Jewish people, I feel like I am watching the opening credits of a Star Wars movie. The main theme appears in text form from the bottom of the screen and slowly moves up as its size reduces towards the horizon and eventually disappears off the screen completely. As years go by, I continue to see the absolute necessity to tell people about critical markers on the timeline of Israel and the global Jewish community. This is why I continue to educate my audience about things like the Crusades, the Inquisition, the Holocaust, BDS and other important events that plague the Jewish people.

If it happens today, it is part of the news, but as soon as tomorrow hits, it becomes part of history. The problem is that not all of history is worth recalling, but whose choice is it to pick what part of history to remember? We all have different interests, customs, traditions and even agendas. They all dictate what we choose to remember, commemorate or celebrate. This being said, there are events that transcend history and must be recalled by all, lest history  becomes forgotten, erased or altered, putting us in a dangerous position where history could repeat itself.

One of these nefarious events took place on the night of November 9-10, 1938 and is remembered every November as Kristallnacht or “The Night of Broken Glass.” But, before we can look at Kristallnacht, we must consider what just happened to the Temple mount that will help us to understand how the two are connected.

This is not the first attempt and probably not the last one either, but 138 countries of the United Nations approved a draft resolution naming the Temple Mount solely as an Islamic holy site, by the name of al-Haram al-Sharif. The title of the resolution itself is so politically charged that it shows the slant taken, “Israeli practices affecting the human rights of the Palestinian people in the Occupied Palestinian Territory, including east Jerusalem.” It is important to note the few countries that voted against the resolution. They were Israel, Australia, Canada, Guatemala, Hungary, Marshall Islands, Micronesia, Nauru and the United States. The European countries who supported the resolution were Belgium, Denmark, France, Finland, Germany, Greece, Ireland, Italy, Lithuania, the Netherlands, Poland, Portugal, Spain, Sweden and the UK to name just a few who also claim to be friends with Israel?

The Temple Mount currently hosts several buildings that are all Muslim. The Dome of the Rock with its gorgeous golden roof–often mistaken for a mosque–is an islamic shrine containing the rock/location from where, according to Islam, Abraham ascended to heaven. The Dome of the Rock was built in the 7th Century AD and further renovated and restored throughout the centuries. The Temple Mount also includes the Al-Aqsa Mosque that was built in AD 705, just a few decades after the Dome of the Rock. Many archeological excavations and studies have been made on the Temple Mount. It was believed for a while that there were no Jewish connections to the area, or at least, as stated by British archeologist Dame Kathleen Kenyon, “no trace of the Temple remained.” She eventually changed her views to declare that much of the remains of Herod’s Temple (2nd Temple) could still be found. Additionally, remains of Solomon’s Temple (First Temple) were also discovered underground, proving without the shadow of a doubt that the geographical location known as the Temple Mount did indeed host both the first and second Temples in Jerusalem. For an in-depth archeological, historical and biblical study of the Temple and its surroundings over the centuries, Dr. Randall Price wrote his authoritative volume, The Temple in Bible Prophecy: A Definitive Look at Its Past, Present and Future.

No serious scholar or archeologist would venture to say that the Temple Mount has no Jewish connections, unless they had an agenda and wanted to push a narrative to delegitimize Israel’s presence and right to self-determination. This is exactly what we are seeing at the present time. This resolution is yet another attempt at re-writing history and delegitimizing Israel. This allows Israel’s foes to paint the Jewish state as an oppressor, invader and colonizer, trying to claim Muslim land, when in fact the real estate where the Temple Mount is located precedes Muslim history by at almost 2,000 years, Solomon’s Temple era having started around 1000 BCE. Biblically speaking, the destruction of the second Temple that took place in AD 70, was prophesied by Yeshua Himself in Matthew 24:2, “And He said to them, “Do you not see all these things? Truly I say to you, not one stone here will be left upon another, which will not be torn down.” It is nothing short of a miracle that we can actually find even traces of the two Jewish building at that location.

So, when the United Nations declare that the Temple Mount has no Jewish connection, they de facto become co-conspirators in the crime of delegitimization of Israel. The danger here, is that if people believe that Israel has no right to the area, it further feeds the narrative of Israel’s occupation and crimes against humanity. Now, the question still remains, “How does the Temple Mount connect historically to Kristallnacht?” Well, it doesn’t connect historically, but it does connect politically, and this is how.

First, a little background on the events that transpired in Germany on the night of November 9-10, 1938. During that dreadful night, a critical event took place that would seal the fate of six million European Jews. That was 82 years ago. The event is known as Kristallnacht or “The Night of Broken Glass.” The reason given by the Nazis was the assassination of German official Ernst vom Rath, shot two days prior by Herschel Grynszpan, a Polish teenager reacting to his parents’ deportation. In reality, the boycott/pogrom of Jewish synagogues, schools, businesses and homes resulting in the death of almost 100 Jewish people and the destruction of 7,500 properties was well planned, and anything but a reaction to the death of a German official.  Additionally, 30,000 Jewish people were sent to concentration camps. Historians agree that Kristallnacht was the onset of the Holocaust, shifting Nazi antisemitism from mere rhetoric to pure violence and murder. It set in motion the death factories aimed at accomplishing “the final solution.” They almost succeeded!

So, it is very important to remember Kristallnacht and tell our children about it, especially in light of current world events. We have seen an increase in acts of antisemitism worldwide, in several cases leading to the death of people in Europe and the United-States. Antisemitism has now become a reality almost on a daily basis. It can no longer be ignored, and yet in the eyes of many, it is not really that important of an issue. As a matter of fact, a recent survey showed that 32% to 50% of young Americans had very little to no knowledge or understanding of the Holocaust. Most couldn’t even name one concentration camp.

Alongside the ignorance of history, the Boycott, Divestment and Sanctions movement is becoming mainstream. So mainstream that people don’t bother checking if any of its accusations are based on facts or fiction. People in Hollywood, in government and even in several Christian denominations are doing their best to cripple Israel and the Jewish people. They are not trying to bring justice to the Middle East as they would want us to believe but rather, they want to completely eradicate Israel from “Palestine”.

The Jewish people have also been accused by some, of creating propaganda with the events of Kristallnacht, the ghettos and the Holocaust, to build a case for themselves to move to “Palestine”, uproot the “native Palestinians” and settle down under the guise of Zionism. When people buy the false narrative of Jewish occupation on a “Muslim only” Temple mount area, they can easily be swayed into buying a revisionist position on Kristallnacht. After all, one of the best ways to completely eradicate a people group is to erase their history. If their history cannot be proven, maybe it never happened, and if it never happened, or was best grossly exaggerated, it also becomes easier to paint this people group as the problem. As it stands, most people are not history buffs. The era of the Internet and social networks has turned us all into consumers of information, and in and of itself, this is not a bad thing. The problem is that we used to be consumers of well prepared, nutritious meals as we took interest in the details of history. Today, most of us only have time for junk food as we barely digest the brief internet soundbites and headlines rarely checked for veracity. So, when people de-judaize the Temple Mount, nobody pays attention or if they do, they don’t question it. The generation that believes that the Temple Mount is a Muslim site only will have no problem believing that Kristallnacht was Jewish propaganda to claim the land of Israel. If and when history repeats itself, this current generation suffering from “self-imposed historical Alzheimer” might not see it coming before it is way too late. That is the very reason why we cannot remain silent!