You are here: Home / Antisemitism / BDS then and now: A Recurring Danger!
Spread the love 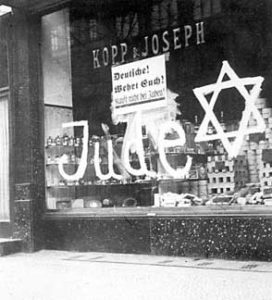 It took place 83 years ago, and it only lasted a day. Apparently it wasn’t even very successful at first but history proved otherwise. On April 1, 1933, various members of the SA and SS stood in front of Jewish businesses all over Germany in a concerted attempted at boycotting them all. Large stars of David where quickly painted on storefront windows to identify Jewish owned businesses, along with words of warning to the German people such as “Germans, defend yourselves! Don’t buy from Jews!” Israel as a modern nation wouldn’t be reborn for another 15 years, so boycotts preceded Israel and existed way before any accusation of occupation.

Although the boycott seemed to be rather insignificant at first, within two years, the Nazis announced the passing of the Nuremberg Race Laws, defining who was a Jew and who wasn’t, or in other words, who was safe and who should run for their lives. Three or four Jewish grand-parents defined you as a Jew, regardless of your level of practice or adherence to Judaism. It was still early enough to run, even though many German Jews who had fought in the great war and considered themselves German citizens in good standing, chose to stay. The vise was tightening on the Jews

It became increasingly difficult for Jewish people to do business, own property and even survive on a daily basis. It was just a matter of time before the Nazi propaganda factory would further alienate the Jews and even demonize them. In early November of 1938, Herschel Grynszpan, a polish Jew reacted to the news of his parents being expelled from Germany. He shot and killed German diplomat Ernst Vom Rath in Paris. A reason to further ostracize the Jews was found. Within a couple of days, between November 9 and 10, 1938, a mass pogrom took place against Jewish people, Jewish businesses and synagogues throughout Germany, Austria, and in some parts of Czechoslovakia. It became know as Kristallnacht or “The Night of Broken Glass.” Historians not plagued by the virus of politically correct historical revisionism, agree that that night marked the onset of what is remembered today as the Holocaust.

Fast forward about eighty years and today the same ominous cycle seems to be looming over the Jews once again. Are boycotts, laws and pogroms about to take pace again? When it comes to pogroms, the honest answer is no, not yet! But regarding boycott and laws, we must realize that the stage is already set.

It was hard to pass strict laws against a people group then and it is hard now. But, removing one small right at a time might go unnoticed by most. I remember my father telling me how his Jewish father who fought the Great War of 1914-18, unconditionally obeyed the French police when asked to bring his radio set to the nearest neighborhood police station. “What bad could come out of that?” he thought! Then it was the bicycles, and other pieces of property that would allow the Jewish community to connect to the outside world. It was the early ghettoization of the Jews within their own homes before creating the larger neighborhood enclaves like the Warsaw Ghetto.

Recently, a major region of Belgium passed a law against the ritual slaughter of animals that is required to prepare kosher meat (very similar to the halal process used by Muslims.) There was also an attempt in 2011 at banning male circumcision in California. Even though it never became a law, one is to wonder the real agenda behind these attempts? Why are we not seeing more outrage regarding Islamic female circumcision at the same time? These laws might not look like much but they are designed to cripple the people that they target. Pogroms might not be a reality, and laws against Jews might still be few and far in between, but the boycott of Israel and Jewish products and companies is going full force.

The modern BDS movement–started in the Middle East in 2005– is only 12 years old, but it has spread across borders quickly.  It is easy to look at such a movement and see the underlying antisemitism that controls it. Boycott, in and of itself is a good method to force a person, an organization or even a country to comply. When it comes to Israel, the false premise on which BDS is built wouldn’t sustain it if people were looking into factual truth. BDS delegitimizes Israel, BDS demonizes Israel and it uses double standards. These three Ds happen to belong to the definition of antisemitism put forward by former refusenik, now head of the Jewish Agency, Nathan Sharansky.

BDS is part of the bigger agenda of the enemies of Israel. It is antisemitism wearing a mask of social justice. States like Texas and Ohio have started to pass laws against BDS and against businesses promoting BDS. Hopefully more will follow suit. We must understand that boycotts, pogroms and anti-Jewish laws work together. They proved to be very efficient in the 1930s and 40s, almost to the point of complete annihilation of the Jews. If BDS continues to gain ground, laws will be passed against the Jews of the world and pogroms might pop-up in various regions. That is why we must speak up against BDS. Buy Israeli products! And if you don’t know where to find them, why don’t you visit a BDS website and find what they want you to boycott and then turn around and buy these very products.