Home » Blog » Appeasement is a Weakness Leading to Collaboration!
Spread the love 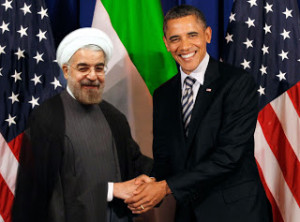 Western civilization might very well be on a new threshold as world leaders have met in Lausanne, Switzerland regarding Iran’s nuclear deal. The deadline arrived and yet, the talks yielded very little. The apparent progress made in the last few days in Europe warranted that the dialogue would continue. One of the big issues that Iran has is with sanctions imposed on them. Their economy has suffered greatly in the last few years, and they demand that sanctions be lifted in a way that would also prevent them from being reinstated automatically. Iran wants to have their diplomatic cake AND eat it too!

Many international voices have been heard on the topic of a nuclear Iran, and few if any are looking forward to that prospect. It is obvious that Iran is politically and ideologically very unstable. That fact was clearly delineated in a speech to Congress on March 3rd when Netanyahu risked his whole career, two weeks prior to the Israeli elections. His plea wasn’t for the safety of Israel but for the survival of Western civilization. Against all odds, a predicted Likud loss turned into a miraculous landslide victory. The White House felt that this was the last straw that justified what could one day be remembered as “The Great Diplomatic Divorce” of the 21st Century. Never before had an American president showed so much contempt for Israel and its current Prime minister.

Our President has great hatred for Israel and its leaders while he is working overtime to appease Iran. Both feats validate his destructive ambitions by weakening our best allies in the Middle East and strengthening what the West could rightfully call the Great Satan, also known as the Islamic Republic of Iran. Mr. Obama is obsessed with the idea of striking up a deal with Iran as much as he is obsessed with the demonization of Israel. It would be understandable–albeit doubtful–if Iran would lie to America and the West about their intentions; but they don’t even do that! How in the world do you even try to negotiate with a country that openly calls for the death of America?

This is a perfect example of appeasement. Mr. Obama is trying to convince the world that Iran not only can be included to the negotiating table, but that they can also be trusted. The Lausanne Iran Summit didn’t yield the results hoped by world leaders. Iran made some promises in regards to slowing down enriching until they come to an agreement. But why would anybody trust Iran’s pathological lying? They simply continue to provide lip service to a world that has its head buried so deep in the sand that nothing matters. All seems to indicate that sanctions will be lifted almost unconditionally. Additionally, Mr. Obama threatens to veto any move by the US Congress that would lead to new sanctions against Iran. This is pretty much the bulk of his foreign policy. He has worked very hard at trying to appease and even accommodate Iran’s nuclear race. So much so that it could be argued that Mr. Obama is no longer simply appeasing Iran but he is now collaborating with Iran.

It is still a mystery to me why the US Senate was handed a report saying that Hezbollah and Iran are no longer considered part of the terrorist list. Seriously? Political analysts and pundits alike might speculate on Obama’s reasons for forcing a relationship with the Islamic Republic of Iran, but the results is what matters! At this point it has become irrelevant if Mr. Obama wants Iran to arm themselves with nuclear capabilities or if he believes that they [Iran] just want to modernize their country’s energy, the results will be the same. If Iran is allowed to continue their nuclear program unbridled as it is, the Middle East will be forced into a frenzied arms race that will tip the global scale forever.

Instead of confronting Iran, Mr. Obama facilitates their agenda. While there are mistakes that world leaders make and even regret as they look back on their political career, ignoring Iran’s call to kill Israel and America could help us reach a point of no return. This wouldn’t be a mistake but a catastrophe!

All the while, the White House’s energy is spent denigrating Benjamin Netanyahu before and during his electoral campaign. Israel’s nuclear secrets are being divulged by the current US administration. Do they not understand that they are shooting themselves in the foot by exposing Israel’s nuclear intel? His disdain for Netanyahu and Israel coupled with his collaborating with Iran is doubly dangerous and could prove lethal to many.
It is very difficult for me to see Mr. Obama’s foreign policy strategy as anything else than a destructive agenda for both the Middle East region and the rest of western civilization. But then again, he claimed he didn’t have strategy to fight ISIS, so I might be giving him too much credit regarding his ability to formulate and implement a constructive foreign policy. Mr. Obama follows in the infamous footsteps of British Prime Minister Neville Chamberlain who saw no risk in dealing with Adolf Hitler. History proved him wrong. Let’s pray that the current “Appeaser-In-Chief” doesn’t turn into a “Collaborator-In-Chief”