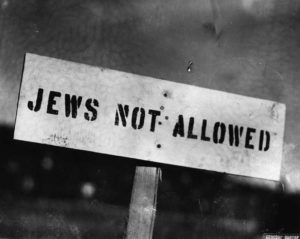 Year after year, anti-Semitism continues to rear its ugly head all over the globe with what appears to be increasing frequency and intensity. 2018 was no different as most of the world recorded an increase in the numbers of anti-Semitic incidents. In this second installment of my two-part series are some highlights from July to December 2018. (Part one here).

Haman, Hitler and BDS: We should know better!
What do the book of Esther, the Nuremberg Laws of 1933 and the Boycott, Divestment and Sanctions (BDS) movement have in common? A lot more than meets the eye! There is a theme found in Esther about Haman’s disdain for the Jewish people that is quite unique in the biblical record. We find the first step in Chapter 3 where Haman puts his curse against the Jews in motion, and because of one Jew, namely Mordecai, Haman seeks to destroy all of them. We start seeing the irrational behaviors promoted by an anti-Semitic heart.

Fast forward to 1935, the Nuremberg Laws were introduced and Jewish people lost their citizenship. Marriage and/or sexual relations between Jews and Aryans were prohibited and severely punished. By 1935, Hitler was solidly established in power. His obsession with the “Jewish problem” would soon lead him to the next step in his attempt at the destruction of European Jewry. The process by which Haman sought to annihilate the Jews as seen in various verses of Esther 3 and the one used by Hitler have many similarities.

Satan, the ultimate enemy of the Jews is constantly re-inventing himself to further demonize and ostracize Israel. Ideologically, BDS is an extension of Hitler’s agenda which was parallel to Haman’s agenda. BDS is a lot more than an economic, academic or entertainment boycott. People need to dig a bit deeper to see the real motives of that sick movement.

UNHRC: Actions Speak Louder Than Words!
Recently, the United States decided to leave the UNHRC (United Nations Human Rights Council.) United Nation US Ambassador Nikki Haley shared the reason in a statement where she said: “For too long, the Human Right Council has bee a protector of human rights abusers and a cesspool of political bias.” Many have seen the move as a retreat, but Miss Haley clearly stated that the move was anything but a retreat. It was because the United State would no longer be part of a hypocritical UN organization that allows for a myriad of human rights violations, elects human rights violators to the UNHRC and has a chronic bias against Israel. In leaving the UNHRC, the United States made a bold move signifying that the days of letting Israel being accused of human rights violation while looking the other way when obvious violators act with impunity are over. Some politicians including John Kerry had spoken against the bias on occasions, but these apparently were just words. Over 50% of the governments sitting on the council are considered repeat offenders when it comes to human rights violations. Like China, Cuba, Saudi Arabia, to name just a few, they are either totalitarian regimes or “non-democracies.”

In another blow to the UN, US National Security Adviser, John Bolton just announced the United States decision to defund the UNHRC. According to John Bolton, the US pays 22% of the UN budget and it would calculate how that relates to the funds given to the UNHRC and defund them. Hopefully, the world will start taking notice of the anti-Israel bias from the UN and the UNHRC and speak up.

Can a Biblical Zionist Love the Palestinians?
Whenever one puts biblical, Zionist and Palestinian in the same sentence, definitions are in order. Unity might never be fully achieved, but it should never be because of lack of clarity. First, what I mean by biblical is “in accordance with the biblical record” that as far as I understand includes the sixty-six books of the Bible, from Genesis to Revelation. As far as a fair definition of Zionism, lest I’d be accused of any bias as a Jew, I prefer to give a plain dictionary definition of the word as, “a movement for (originally) the re-establishment and (now) the development and protection of a Jewish nation in what is now Israel.”

Now, for the definition of who is a Palestinian, it gets a little tricky. Again, for the sake of clarity, I will say, “any physical descendant of the various Arab inhabitants of the Land of Israel known as Palestine prior to 1948.” We must not forget that Palestine as a word was introduced by the Roman empire at the time of the Bar Kohba Revolt in AD 132 (A failed Jewish revolt against Rome.) Eventually, under the leadership of Yassir Arafat and subsequent “Palestinian” leaders, the etymology of the word was expanded to mean both a land AND a people, a political claim that cannot be proven historically, archeologically, culturally or biblically.

The biblical Zionist’s love for Israel and the Jewish people is a result of his understanding of the eternal, unconditional and unilateral Abrahamic Covenant. But the great love that biblical Zionists display for Israel and the Jewish people should not be exclusive, and it should extend to all, even those who have been indoctrinated to hate and destroy Israel. In the words of Yeshua in Matthew 5:44, we read, “But I say to you, love your enemies and pray for those who persecute you. This absolutely doesn’t imply that all Palestinians today hate the Jews. So YES, a biblical Zionist not only can but should love the Palestinians.  Over the years, I have found that to love Israel one doesn’t have to hate the Palestinians, but sadly, the opposite is seldom true!

All Hate Crimes are a slap in God’s Face!
It was just another peaceful Shabbat morning at the Tree of Life Synagogue in Pittsburg, Pennsylvania, when antisemitic Neo-Nazi Robert Bowers barged in with a semi-automatic weapon, screaming “all Jews must die!” and aimed at the crowd. By mid-day, the death toll had reached 11. It is believed that this tragedy was the largest and deadliest attack on Jews on American soil. How do you move on from such a bloody massacre?

Jewish people have been victims of hate crimes more than all other groups combined, but this is not a competition. Hate crimes are an abomination and shouldn’t happen anywhere, especially in the United States and in 2018. Beyond the tragedy that they create in communities and families, they are a slap in G-d’s face Who created man in His own image. They are also a poke in G-d’s eye who calls the Jewish people “The apple of my eye” in Zechariah 2:8

. It is because of man’s self-ruling outside of G-d’s will that hate crimes become possible.

We shouldn’t succumb to the temptation of politicizing this horrible tragedy, because it was not political but spiritual. When the enemy of G-d (Satan) is at work against the people of G-d, it is no time for political bickering, but it is time for prayer more than ever.

Let’s start by lifting up the memory of the victims (Joyce Fienburg, 75; Richard Gottfried, 65; Rose Mallinger, 97; Jerry Rabinowitz, 66; Cecil Rosenthal, 59; David Rosenthal, 54; Bernice Simon, 84; Sylvan Simon, 86; Daniel Stein, 71; Melvin Wax, 88; Irving Younger, 69)  and their families. If you are Jewish, while you shouldn’t yell it on rooftops, you also cannot live in fear. Otherwise, people like Robert Bowers have won the battle.

To the Anti-Semite we are All Jews!
There is a real danger today for Jewish people everywhere except in Israel because except for the Jewish State, all foreign governments approach antisemitism differently and they are not necessarily very efficient. Definitions of what constitutes antisemitism vary from country to country and sometimes even from various organizations within the same country. That is one reason why it is difficult to fight since acts against Jewish people are often under-reported, misreported or worse…not reported, especially if it involves a Muslim. The politically correct fear of insulting a particular group is so prevalent in the United States that an antisemitic crime might simply be categorized as a violent crime in fears of reprisals. It is time for all Jews to unite against antisemitism, but unfortunately, we are far from being united, and it helps the enemy greatly. Jewish people define themselves in a variety of ways including religiosity, ethnic origins, and Zionism to name just a few. It can get confusing when one doesn’t differentiate between Jewishness (ethnic connection) and Judaism (religious affiliation). But really, one can be ethnically Jewish without practicing Judaism and one can practice Judaism without being born Jewish.

). Unfortunately, the vast majority of the Jewish community who doesn’t recognize Yeshua as Messiah also rejects the idea that once we follow His teaching we remain Jews.
Considering all the ways we can define who is a Jew, there is one fact that the antisemites are right about…We are all Jews, and as such we are a nuisance, and in some cases, as we witnessed during the Tree of Life bloody massacre “All Jews deserve to die”. My point is that to an antisemite if a Jew is Ultra-Orthodox, agnostic, Reconstructionist or even Messianic, he remains a Jew. The antisemite is an equal opportunity xenophobe. He does not discriminate. To that person…We are all Jews indeed!

Christmas with Hizbollah: There is Fake News and then there is Propaganda!
Currently, Hezbollah is digging terror tunnels on the northern border of  Israel akin to those built and used by Hamas to funnel terrorists underground from the Gaza strip to Israel. The IDF has been working hard to put a stop to these tunnels, including the destruction of several of them. They also discovered that the tunnels lead to urban areas on the Lebanese side, proving once again that one of the preferred methods of the terrorists, is to use civilians as shields for their operations. On one hand, the United Nations, always eager to pass one more resolution against Israel, is doing absolutely nothing about the tunnels. They have discussed them but have not taken any actions to put a stop to them. On the other hand, Benjamin Netanyahu is determined to do all in Israel’s power to destroy them in an effort to protect the country. So it is clear that “Iran backed” Hizbollah is on a terror mission to destroy Israel, and yet they have received praise from the New York Times for their recent “Christmas spirit efforts”. In a tweet, they even stated “Even Hezbollah, the Shiite political movement and militia that the United States has branded a terrorist organization, has helped ring in the season in previous years, importing a Santa to Beirut’s southern suburbs to distribute gifts”.

Personally, I have given up the hope of integrity from the New York Times for a while now. This is not even an issue of political leanings anymore but an issue of evil propaganda. I wish I could say that the reporters and journalists at the New York Times didn’t know any better, but what would that say about the state of journalism in 2018? Well, maybe it does?

2018 was replete with acts of anti-Semitism on a global scale and 2019 doesn’t show any signs of letting down. It is incumbent upon people of good will to speak up and fight all sorts of racism, including anti-Semitism. The weed of anti-Semitism is chocking the Jews all over the world, but it will choke many more people if it is allowed to grow much further!
(Part one here).