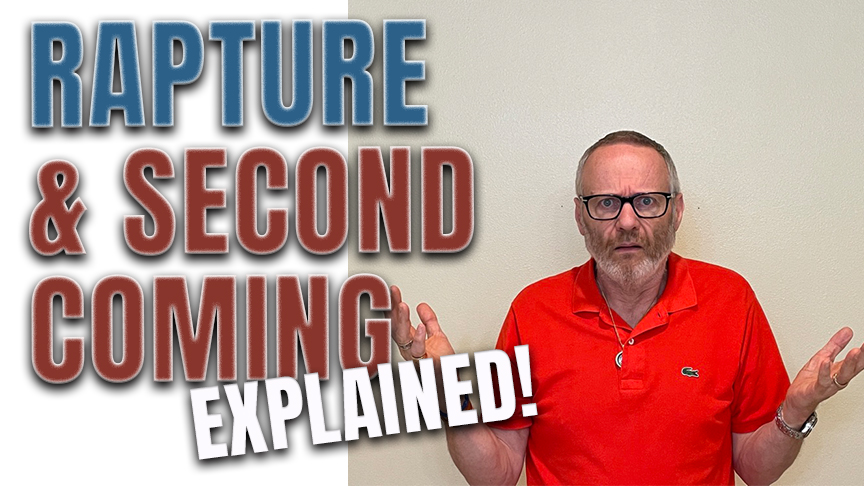 The topic of the Rapture of the Church has been a controversial one for quite a while now. The pendulum swings from the Rapture being an invention or a myth all the way to being an imminent event to take place before the Great Tribulation, with a lot of adjusted theological positions in between. Additionally, many have come to look at the Rapture and the Second Coming as being one and the same event. The Bible does give us plenty of information regarding the timing of both the Rapture and the Second Coming to know how and when they will take place and who will be included. The differences will be looked at from a pre-tribulation/premillennial viewpoint, which means that the sequence of events is as follows: Rapture, Seven Year Great Tribulation (seven actual years), Second Coming of Messiah, Millennial Kingdom (1,000 actual years) and Eternal Order. Let’s look at the timing, purpose and people for both events.

1 Corinthians 1:7 so that you are not lacking in any gift, as you wait for the revealing of our Yeshua the Messiah,

Titus 2:13 waiting for our blessed hope, the appearing of the glory of our great God and Savior Yeshua the Messiah,

Hebrews 9:28 so Messiah, having been offered once to bear the sins of many, will appear a second time, not to deal with sin but to save those who are eagerly waiting for him.

We must also keep in mind that imminency means certainty as it is inevitable, but uncertainty as to when it will take place. Its imminency should motivate us to share the Good News with the lost and give us hope for the future.

An often ignored, but key component of the timing of the Second Coming, is Israel’s involvement. Yeshua promised at the end of Matthew 23 that Israel will not see Him again until they corporately say Baruch Haba Bashem Adonai, meaning “Blessed is He who comes in the name of the Lord”. This is based on the prophecy of Zechariah 12:10, “And I will pour out on the house of David and the inhabitants of Jerusalem a spirit of grace and pleas for mercy, so that, when they look on me, on him whom they have pierced, they shall mourn for him, as one mourns for an only child, and weep bitterly over him, as one weeps over a firstborn,” that will take place at the end of the seven-year Tribulation, after two-thirds of all Jewish people living during the Tribulation will have been decimated

Zechariah 13:8-9 In the whole land, declares the LORD, two thirds shall be cut off and perish, and one third shall be left alive. 9 And I will put this third into the fire, and refine them as one refines silver, and test them as gold is tested. They will call upon my name, and I will answer them. I will say, ‘They are my people; and they will say, ‘The LORD is my God.’”

If this was to happen today, two-thirds of all Jewish people alive would be 10 million which is almost double the casualties of the Holocaust. God didn’t give us numbers here but a percentage of 2/3 and 1/3. The percentage will never change, and any casualty is a tragedy, but the final number of Jewish people dying during the Great Tribulation can be drastically reduced if Christians share the Gospel with their Jewish friends and more come to the Lord before the Rapture. Truly, today more than ever, time is of the essence.

Honestly, we should boldly proclaim the Gospel to our Jewish friends if we believe that their acceptance would secure them a place during the Rapture and would prevent them from the carnage of the Tribulation.

The reason why this is very important is that by the time Yeshua returns at the Second Coming the clock starts ticking for Satan’s demise and the time is very short. Outside of a short time when he is released at the end of the Millennium (Revelation 20:7-10), Satan’s fate is sealed and he is bound for eternal torment in the Lake of fire without relief. Satan is never the “boss” of Hell, but rather one of the first ones thrown in; and this is because of Israel’s recognition of her Messiah, missed and rejected at His First Coming. The very Jewish people that are the apple of God’s eye according to Zechariah 2:8b, are the people Satan hates the most, and are also the people that will become the catalyst for Yeshua’s Second Coming. If the Jews don’t call on Him, He simply will not return and Satan’s job is secure. Pushing the Jewish people away from Yeshua has been Satan’s entire career.  He’s managed to work with antisemitism – by placing that hatred in the hearts of men – and done much damage to the Jewish people over the centuries.

1 Thessalonians 1:10 and to wait for his Son from heaven, whom he raised from the dead, Yeshua who delivers us from the wrath to come.

1 Thessalonians 5:9 For God has not destined us for wrath, but to obtain salvation through our Lord Yeshua the Messiah

Revelation 3:10 Because you have kept my word about patient endurance, I will keep you from the hour of trial that is coming on the whole world, to try those who dwell on the earth.

Now, this is not a view shared by all believers, but for those who agree with the event, we can say that the Rapture is the first phase of the Second Coming of Messiah. This is the phase when He doesn’t land on earth but calls us up. At such a time, two things will happen, as seen in

1 Thessalonians 4:16-17 For the Lord himself will descend from heaven with a cry of command, with the voice of an archangel, and with the sound of the trumpet of God. And the dead in Messiah will rise first. 17 Then we who are alive, who are left, will be caught up together with them in the clouds to meet the Lord in the air, and so we will always be with the Lord.

So, the dead in Messiah (deceased believers from the birth of the Church to that time) will rise first, closely followed by all other believers alive at the time. This can also be called the resurrection of the righteous. The book of Revelation does not make any reference to the Church after chapter 3. This seems to indicate that the Church will not be part of the Tribulation, since all the damage inflicted by the Antichrist from the middle of the Tribulation forward never mentions the Church once.

The Tribulation seems to coincide with the 70th week of Daniel 9:27 starting after the Antichrist signs a peace treaty with Israel. Simply put, as the first step of the Second Coming, the Rapture will take place because God wants to protect His people from His wrath on earth.

Daniel 9:27 And he shall make a strong covenant with many for one week, and for half of the week he shall put an end to sacrifice and offering. And on the wing of abominations shall come one who makes desolate, until the decreed end is poured out on the desolator.”

The Purpose for the Second Coming: No one knows how much time will transpire between the Rapture and the Start of the Tribulation, but common sense would dictate that the Antichrist will have to show up quickly and establish his hegemony with authority. At least seven years after the Rapture, at the end of the Great Tribulation, Yeshua will return to earth with those He had raptured. This will take place at the end of the Campaign of Armageddon when He comes to defeat the Antichrist

Revelation19:19-21 And I saw the beast and the kings of the earth with their armies gathered to make war against him who was sitting on the horse and against his army. 20 And the beast was captured, and with it the false prophet who in its presence had done the signs by which he deceived those who had received the mark of the beast and those who worshiped its image. These two were thrown alive into the lake of fire that burns with sulfur. 21 And the rest were slain by the sword that came from the mouth of him who was sitting on the horse, and all the birds were gorged with their flesh.

Messiah will come to fulfill His promise of return spoken of in the Old and New Testament (Zechariah 14:4; Matthew 25:31; Acts 1:9-11).  Probably the most mentioned in the Tanach, is the fact that Messiah also comes to regather and restore the nation of Israel (Isaiah 43:5-6; Jeremiah 30:10; Ezekiel 36:24-38). It will be both a physical and spiritual regathering. He is also coming to judge the living Gentiles (Matthew 25:31-46) and Jews (Ezekiel 20:33-38) who survived the Tribulation.

It is also after the Second Coming that Yeshua will resurrect the Old Testament saints Revelation 20:4-6 and

Daniel 12:1-2 “At that time shall arise Michael, the great prince who has charge of your people. And there shall be a time of trouble, such as never has been since there was a nation till that time. But at that time your people shall be delivered, everyone whose name shall be found written in the book. 2 And many of those who sleep in the dust of the earth shall awake, some to everlasting life, and some to shame and everlasting contempt.

The People of the Rapture: For those of us who believe in a literal Rapture, it is actually quite simple to understand. Only those “in Messiah” will be included in the event, requiring them to be in Messiah by the baptism of the Holy Spirit (1 Corinthians 12:13.) That includes all believers who died from the birth of the Church at Shavuot (Feast of Weeks) and all who are still alive, as we learned in Acts 2. The dead in Messiah first and then those alive, not long after. Nobody else will be included at that time.

The People of the Second Coming: Yeshua’s Second Coming will deal with a different group of people. First, He will return with the believers (saints) in their glorified bodies that were raptured seven years prior. Our role in His return will simply be to accompany Him and be observers of the final chapters of history. The Campaign of Armageddon is between Yeshua and His enemies led by the Antichrist. We will be there, but uninvolved. It will be a literal, personal, sudden, visible and glorious return. The Second Coming includes a judgment of all people known as the Great White throne judgment (Revelation 20:12-13). It is for all those who died without trusting Yeshua. Many will be surprised as they thought that religion was the answer, but they truly didn’t have a personal relationship with Yeshua, “Not everyone who says to me, ‘Lord, Lord,’ will enter the kingdom of heaven, but the one who does the will of my Father who is in heaven. On that day many will say to me, ‘Lord, Lord, did we not prophesy in your name, and cast out demons in your name, and do many mighty works in your name?’ And then will I declare to them, ‘I never knew you; depart from me, you workers of lawlessness.” (Matthew 7:21-23).  It is different from the Bema Seat Judgment that believers will undergo after the Rapture (2 Corinthians 5:9-10). That judgment of the believers is connected to service to the Lord and rewards for service, but salvation is never in question.

The Rapture is very different from the Second Coming or is at the very least the first part of the Second Coming. The second part is the physical future return of Yeshua on the Mount of Olives to judge the world. Regardless of where one stands on the Rapture, most people will agree that Yeshua is coming back at some point in the future, and when that occurs, a lot of people will not make the cut. The question is: Will you?