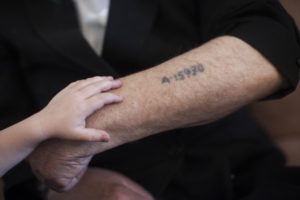 Holocaust Remembrance Day or Yom HaShoah (meaning “Day of the Catastrophe”) has taken place every year on the 27th of Nisan since its inception in 1951. At 10:00 AM local time in Israel, everything comes to a stop as a siren is heard all over the country. Motorists literally stop in the middle of the road and observe two minutes of silence. It is both eerie and poignant!

This year more than ever we need to remember what took place in Nazi Germany almost 80 years ago:

• At a time when Israel is falsely accused of ethnic cleansing in their very own land, we must remember the days when Jews were almost eradicated from the face of the earth.

• At a time when it is becoming more and more dangerous to be Jewish anywhere in the world (except Israel), we must remember those who died simply because they were Jewish.

• At a time when worshipping in a synagogue could end in a lethal terror attack, we must remember the victims of Pittsburgh and San Diego and all other houses of worship around the globe.

• At a time when the world is pushing for the Boycott, Divestment and Sanctions against Israel, we must remember that it already took place during the November 1938 Kristallnacht and that there is nothing new under the sun.

• At a time when the US Congress has been infiltrated with a new generation of anti-Semitic representatives, we must remember when Jewish people didn’t have a voice in government.

• At a time when a mainstream US newspaper publishes yet another virulently anti-Semitic cartoon, we must remember 2,000 years of anti-Jewish caricatures leading to thousands of unnecessary deaths.

• At a time when two-thirds of millennials do not know what Auschwitz is, we must remember the motto “NEVER AGAIN.”

• At a time when anti-Semitism is becoming the new normal around the world, we must remember that according to Edmund Burke, “all that is necessary for the triumph of evil, is that good men do nothing.”

And finally, at a time when much of the world would rather not talk about the Holocaust, undermine its tragic outcome or worse, pretend it never happened, we must remember it, lest it happens again. Nobody cares about something they forgot, don’t know about or believe never took place. Historical revisionism is akin to time travel to the past hoping to erase a part of history that is uncomfortable or hard to deal with. But we cannot erase the past and we must learn from it, as painful as it is. There is an increasing numbness to the rise of the new anti-Semitism that should send chills down the spine of all people of good will. It is like some sort of “anti-Jewish fatigue.”

This year, Holocaust Remembrance Day coincides with the National Day of prayer on May 2, 2019. Wherever we are located, either at 6:00 AM or 6:00 PM local time, it might be a good idea for us to pause in our busy day and pray for the remaining family members of the six-million and to the memory of those same victims. Keep in mind that if we were to have one minute of silence for all the victims of the Holocaust, it would require us to be silent for over eleven years straight!

We can all spend two minutes to remember the Holocaust, but we should all spend the rest of the year to fight those who try to undermine it, ridicule it or erase it from history! The future of many Jewish people could depend on our involvement!