You are here: Home / Archives for Hate Crime 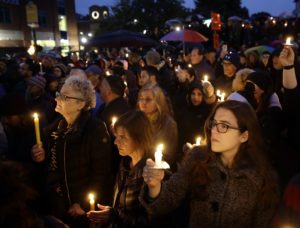 It was just another peaceful Shabbat morning at the Tree of Life Synagogue in Pittsburg, Pennsylvania. Jewish worshippers had gathered as a community to spend time together and with G-d. Before they knew it, antisemitic Neo-Nazi Robert Bowers barged in with a semi-automatic weapon, screaming “all Jews must die!” and aimed at the crowd. By mid-day, the death toll had reached 11. It is believed that this tragedy was the largest and deadliest attack on Jews on American soil. One of the victims was a 97-year-old woman who had survived the Holocaust. Our prayers go out to the community, the families who lost loved ones and those of the Jewish community, left behind to move on. How do you move on from such a bloody massacre?

The safety of Jews is becoming a real challenge on a global scale. What do we Jews have in common over the rest of the world? We could easily answer that we are equally hated no matter where we go, except maybe for Eretz Yisrael. I would much rather spend time reflecting on all the other things that connect Jewish people around the world such as culture, traditions, language, history and more, but the sad reality is that the irrational hatred of our people is becoming more and more of a common denominator. What can men and women of good will do about this?

First, we need to realize that hate crimes are increasing exponentially. When we speak of hate crimes, we don’t just speak of crimes against Jewish people, but crimes against any group based on race, creed or religion. The FBI defines a hate crime this way “A hate crime is a traditional offense like murder, arson, or vandalism with an added element of bias. For the purposes of collecting statistics, the FBI has defined a hate crime as a ‘criminal offense against a person or property motivated in whole or in part by an offender’s bias against a race, religion, disability, sexual orientation, ethnicity, gender, or gender identity.’ ”

While the FBI insists that hate itself is not a crime and works hard to protect our freedom of speech, the line is being crossed more often than not to transfer hatred into actions against many different groups. Is there a difference between a hate crime and an act of terrorism? Since terrorism’s primary goal is to disrupt the normal flow of everyday’s life, upset the normal and put people on edge, so they start fearing their every move, the answer is NO! Hate crimes against Jews, Muslims, Christians, homosexuals or any other group are wrong and punishable by law.

According to a 2016 FBI study, over half (54.4%) of all hate crimes in the US are committed against Jewish people. The numbers are probably a bit higher if we take into account the crimes that are not reported and those not recorded as hate crimes. In comparison, hate crimes against Muslims only account for 24.5%. Those numbers come from a category titled “religious bias.” For Jewish people, it even gets a bit more complicated because one can be Jewish and not religious. In fact, about 85% of all Jewish people are not religious. This, unfortunately, doesn’t exclude them from the danger posed by hate crimes.

According to another study by the Anti-Defamation League (ADL), antisemitism has surged 60% in 2017. Jewish people in America are starting not to feel safe anywhere. The sad part is that sometimes, the hatred coming against us, that materializes into hate crimes, is at the hand of people who have never had any interaction with Jewish people. Their antisemitism is viral and irrational. In their warped minds, the Jews are responsible for the ills of the world. Ask them for the reason why they think that way, and they are at a loss, except that “Jews must die!”

Jewish people have been victims of hate crimes more than all other groups combined, but this is not a competition. Hate crimes are an abomination and shouldn’t happen anywhere, especially in the United States and in 2018. Beyond the tragedy that they create in communities and families, they are a slap in G-d’s face Who created man in His own image. They are also a poke in G-d’s eye who calls the Jewish people “The apple of my eye” in Zechariah 2:8. It is because of man’s self-ruling outside of G-d’s will that hate crimes become possible.

We shouldn’t succumb to the temptation of politicizing this horrible tragedy, because it was not political but spiritual. When the enemy of G-d (Satan) is at work against the people of G-d, it is no time for political bickering, but it is time for prayer more than ever.
Let’s start by lifting up the memory of the victims (Joyce Fienburg, 75; Richard Gottfried, 65; Rose Mallinger, 97; Jerry Rabinowitz, 66; Cecil Rosenthal, 59; David Rosenthal, 54; Bernice Simon, 84; Sylvan Simon, 86; Daniel Stein, 71; Melvin Wax, 88; Irving Younger, 69)  and their families.

Tomorrow is the day to get educated and stay alert. If you are Jewish, while you shouldn’t yell it on rooftops, you also cannot live in fear. Otherwise, people like Robert Bowers have won the battle.