You are here: Home / Archives for Ezekiel 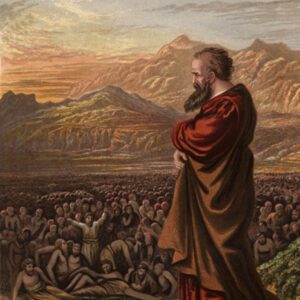 The words “end times”, “prophecy” or “prophetic” usually get people’s attention when uttered, and they should! Unfortunately, a lot of false teaching is being done under the heading of “end times prophecies” and it can be very damaging. There is a proper, healthy way to look at the prophetic word, biblically. But let’s start by defining what we mean by prophecy. The word “prophecy” comes from two Greek words meaning, “to speak for or before”. Thus, prophecy means to be speaking or writing about events for someone or before they occurred. All prophecies of the Bible are from God only, and none of them were from the prophet’s origin (2 Peter 1:20.) The prophet of God can either be used for forth-telling (inspired telling) or  foretelling (predicting). In both cases, they are directed by God Himself for the benefit of mankind. From that perspective, almost 30% of the Tenach (Old Testament) is prophetic, and almost 22% of the B’rit Hadashah (New Testament) is prophetic.

More and more people are wondering why we should even study prophecy. Intimidated by apparent biblical difficulties, inconsistencies or contradictions, people give up on prophecy and miss out on about one third of the counsel of God.  We should study prophecy for several reasons:

• It comforts and calms: God has always been in control of all events of history. We are comforted (John 14:1-4) with the fact that He gave us His unchanging word, especially messianic prophecies that were all literally fulfilled in ONE person, the future unfulfilled prophecies will likewise be literally fulfilled.
• It cleanses and changes: In light of the fact that Yeshua of Nazareth could return at any moment, we should strive to lead lives that are pleasing to Him. (Titus 2:14; 2 Peter 3:13-14). In the effort to lead better lives for Him, we cannot avoid growing closer to God.
• It helps us understand who Messiah is and who God is: By studying messianic prophecies in the Tenach (Old Testament), we discover that through progressive revelation, God has granted us with increasing knowledge about the person, character, timeline and redemptive career of Messiah. Eventually, as the prophecies are studied within the grammatical/historical context, they all point to the same person: Yeshua of Nazareth.

But we must be careful to properly approach the prophetic word. Many approaches to the study of prophecy have been introduced over the ages. It is important to use a consistent approach when studying prophecy, as switching between approaches might satisfy our desire for an interpretation that fits our needs or understanding, but would do a disservice to God’s word. The proper study of prophecy helps us understand the whole Bible and it motivates us to live godly lives.

Towards that goal, we must remember the David L. Cooper’s “Golden Rule of Interpretation”: “When the plain sense of Scripture makes common sense, seek no other sense; therefore, take every word at its primary, ordinary, usual, literal meaning unless the facts of the immediate context, studied in the light of related passages and axiomatic and fundamental truths, indicate clearly otherwise.”  The bottom line is this; a text apart from its context is a pretext!

Regardless of all the warnings about taking Scripture out of context to fit the news or one’s opinion (eisegesis), people thrive on speculating on end times events. Newspaper eisegesis is running rampant today. Especially in the era of the Internet and social networks, it is easy for someone to become a self-proclaimed prophecy teacher, throwing a bible verse here and there to impress their online audiences.

Trying to identify the Antichrist or pinpoint the exact date of the Rapture of the believers are two favorite topics for a lot of people. There have been more potential candidates for the office of antichrist over the ages, than we can count or list here. Some say that he will be a Muslim, others say that he will be a Jew or a Gentile. People are divided on that topic, but it preaches well, and it sells books even better. A thorough study of the prophet Daniel and the book of Revelation will equip us to understand that the Antichrist will be a Gentile leader (read “totalitarian dictator”) who will appear on the world scene after the Rapture of the believers, as soon as the Great Tribulation starts (Daniel 9:27.)

As to the Rapture, people have been speculating on the exact date when it will occur, when in fact nobody knows the day or the hour. These, as Ed Hindson and Mark Hitchcock state, are “calculated guesses based upon interpretive assumptions” at best. We can learn from a study of God’s word  that the Rapture will happen, and that it will be before the Tribulation, although not everybody agrees on the timing, but nobody should set a firm date. I often imagine Yeshua, currently at the right hand of God, looking down on us and each time someone sets a new date, He shrugs and says: “They set a new date for the Rapture, I got to postpone again!” I say this tongue-in-cheek of course, but there is some truth in that statement.

Now, I promised you at least one end times bible prophecy that you can take to the bank, I will actually give you two. This doesn’t mean that the rest of the prophetic word cannot be trusted or is with error. It simply means that we should tread the prophetic landscape carefully, lest we have to back pedal on some unfounded dogmatic statement we made. As to the currents events that we can know for sure are part of the prophetic future, they are the apostasy of the Church and the return of the Jewish people to the land of Israel.

The apostasy of the Church is promised in the Bible. Paul said that the Antichrist will not be revealed to the world until “the apostasy comes first” (2 Thessalonians 2:3.) Additionally, Yeshua prophesied that “many will fall away” and “most people’s love will grow cold” (Matthew 24:10, 12.) It is not difficult to see that much of the Church today is increasingly shifting towards that toxic behavior. Revelation 2 and 3 also give us some examples of the great falling away. Are we in the midst of the great apostasy? Will it get worse before it gets better? Are we not there yet? I think that we have started as a Church to see the falling away but it will get worse, and I am not even talking about the Great Tribulation, but what must take place before it.

Now, let’s look at the one world event that we are living through today that is a guarantee that we are in the last days. I am speaking of the regathering of the Jewish people to the land of Eretz Yisrael. God promised to restore the land of Israel and He did when He allowed for the birth of the modern state of Israel on May 14, 1948. Beyond the restoration of the land, He also promised in Ezekiel that the Jewish people would return to it in the end times. Ezekiel 36:24 is clear, “For I will take you from the nations, gather you from all the lands and bring you into your own land.” This speaks of the physical restoration of Israel and it has literally been happening in front of our very eyes for the last few decades. Additionally, In Ezekiel 37, the prophet is given a vision known as “the vision of the valley of dry bones”, in which he is told that Jewish people will return to Israel. This is about Israel’s national restoration, which is controlled by the God of Israel.

Jews have been coming to Israel under “the Law of Return” since 1948, but even more so in the last few decades. God is directing His chosen people back to His land for the final days before the return of the Mashiach. France has lost 50,000 Jews in the last 30 years, most of them in the last 15, due to the increased antisemitism that we have been witnessing lately. Is God behind this surge in antisemitism? He is not, but He can easily allow it as part of His divine plan. After all, He allowed for Satan to mess with Job at a level that most of us cannot even comprehend, but God did not hurt Job Himself. Can God allow for antisemitism to increase so that His chosen people will return home to Israel? Can God allow us to get into difficult and dangerous situations to draw us closer to Him, the answer is yes to both.

But, the national physical restoration is only part of this world event, because we will also see the spiritual rebirth of Israel as we read in Ezekiel 36:25-27, “Then I will sprinkle clean water on you, and you will be clean; I will cleanse you from all your filthiness and from all your idols. 26 Moreover, I will give you a new heart and put a new spirit within you; and I will remove the heart of stone from your flesh and give you a heart of flesh. 27 I will put My Spirit within you and cause you to walk in My statutes, and you will be careful to observe My ordinances.”

Frankly, the national regathering of Israel is nothing short of a miracle. We, the Jews should not exist, if it was not for God’s grace and the fact that He made promises to Israel that He ratified in His covenants. The fact that Jewish people are moving to Israel in droves from the four corners of the world should encourage us about God’s promises. It is the one current end times prophecy that we can claim is happening in front of our very eyes. What it does, is that it confirms that the word of God is true, tested and guaranteed.

We do not need to know the exact identity of the Antichrist (if you do know his identity, it actually means that you were left behind and are suffering through the Great Tribulation, and you don’t really want that to happen to you!) We also do not need to know the exact date for the Rapture, we just need to know that it will happen for sure (it is actually the next prophetic event on God’s timetable and could happen anytime now.) What we need to know, is that as we see the Jewish people repopulating their ancestral biblical land, we are living in the end times for sure and this should encourage us and motivate us to share the Gospel with people.