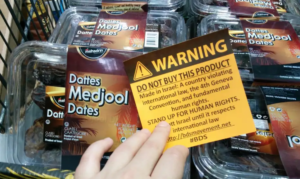 The Boycott, Divestment and Sanctions (BDS) movement continues to be the best-kept secret in a lot of circles, including the evangelical community. While its proponents will tell you that it was born in 2005 in “Palestine”, the concept goes back in history, much earlier than that. It was also supposed to be modeled after the boycott of South Africa for apartheid (of course we are comparing apples to oranges here.) The boycott of Jewish people and businesses can be traced back to November 1938 during the “night of broken glass” know in history as “Kristallnacht”, so it is anything but new!

Simply stated, BDS is a global campaign to demonize and isolate Israel. BDS proponents claim that the principle is valid for all people, countries and corporations, yet, to date, it has only been applied to Israel. It saddens me to meet people regularly in various churches who either don’t know about BDS, know the acronym but understand very little about its meaning or even worse, know what it means and are mislead into supporting its goal. In all three cases, it can be very damaging to Israel and the Jewish people of the Diaspora. To be sure, I am not against the concept of boycotting, but I am against the idea of boycotting entities that are not guilty and/or the hypocrisy of selective boycotting.

Recently, an advisor in one of the European Union major courts recommended that products coming from the “occupied territories” be labeled as such so that consumers be made aware of their origins and make an educated decision regarding their purchase. I understand where they are coming from, but why is it that when they see the label “Made in China” they do not think for a second about boycotting China–a country guilty of human rights violations on so many levels? Why? Because China produces so much for the entire world that it would cripple and even collapse the global economy if people were consistent in their boycotts. And I am only taking one country as an example of the constant double-standard used on Israel. I could list many more.

Now, we could look at BDS and only see the negative, but if we want to make a difference, four steps are required: Comprehend, condemn, combat and conquer. You cannot win unless you fight and you cannot fight unless you are convinced that the cause is worth fighting against. It all starts with condemning it after you comprehend what it is all about and where it comes from. Each of these four steps builds upon the previous one. To be perfectly honest, I am not certain that we will be able to completely conquer and eradicate BDS. But each individual battle is well worth fighting even if the war keeps raging. Even if we cripple, delay, embarrass or just expose the BDS supporters and promoters, we strike against the beast. We cannot remain silent.

Comprehending and condemning usually happen back to back or even simultaneously, especially for those who read their Bible and understand the place of Israel in the plan of God for humanity.  Combatting takes a special effort, concerted or individual. There is an unexpected way to combat BDS that could be viewed as soft, but nonetheless very efficient. It simply turns a negative into a positive, just like God did at the end of the book of Genesis when Joseph embraces his brothers telling them in Genesis 50:20″ As for you, you meant evil against me, but God meant it for good in order to bring about this present result, to preserve many people alive.”  Joseph’s brothers had sold him years prior, to a passing caravan and through God’s providence, he had survived and become second in command to Pharaoh in Egypt. It could be argued that the 70 people from Israel who came to Joseph in Egypt because of a severe famine and grew to over one million, would have never survived were it not for God’s intervention through Joseph. A good came out of a bad. Yes God can do that. He is God after all!

So let’s make a good out of a bad in the realm of BDS. Here is how. We start to buy as many Israeli made products as we can and even invest in Israeli businesses. Most of you are probably thinking, “Well, I am not sure that I know any, and how would I recognize them. It would take so long?” Don’t get discouraged, we have the BDS people to help us. They have already done their homework and are listing and updating lists of Israeli products and corporations to boycott. All we have to do is go on the sites, read who they tell the world to avoid supporting and what they tell us to stop buying, and do the exact opposite, et voilà! Start with this list. Don’t bother reading the propaganda and fake reports, just make a note of the brands. Here is a much more comprehensive list by categories. Happy shopping!

Most of the products are good for you. Many of the corporations are greatly innovative. So buy Israeli, invest Israeli and visit Israel! Who knew that BDS could benefit Israel that much?