You are here: Home / Jewish / All you ever wanted to know about the Jews is in a Norwegian cartoon!
Spread the love

Within the last week, Dagbladet, one of the leading Norwegian paper published a cartoon that has the worldwide Jewish community in shock. It is unfortunately not their first since they also published one in 2011 comparing the treatment of Palestinians in Gaza to that of the Jews during the Holocaust. 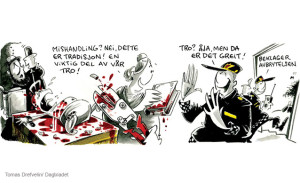 The cartoon depicts a child being held by a Jewish man in black garb reminiscent of an Orthodox Jew. The man holds a Jewish holy book (possibly the Torah or Talmud) in one hand and holds the boy’s head down on the table using a small pitchfork not unlike a small version of the devil’s pitchfork. The child’s toes are being violently cut off by an unseen third person. All of it while the child is screaming and blood is being splattered everywhere. The police is present, investigating the incident while a woman also holding a holy book or prayer book, tells them that they shouldn’t worry since this is part of their belief system. The policemen apologize and leave the scene.
Cartooning can be a very dangerous sport, but this of course depends on who you choose to caricature. For instance, if you are so inclined to make fun of anything remotely connected to Islam, let alone the prophet Muhammad, “the religion of peace” quickly reacts in ways that we have recently witnessed. Like what happened in France  earlier this year with the firebombing of satirical magazine Charlie Hebdo, (not that I particularly appreciate or subscribe to that magazine’s abrasiveness in reporting).
The Norwegian cartoon for which the paper has yet to apologize (as of the publishing of this article), depicts the Jewish people in a way that would win the absolute approval of Nazi minister of propaganda Josef Goebbels. We can learn so much about the Jewish people in just one cartoon. But of course, the real question is: “What are we rally learning, are we being fed lies or are we being educated about the truth?”

•    Circumcision is torture: Myth or fact?
The fact is that circumcision IS A JEWISH RITUAL that goes back to ancient Israel and is the sign of the Covenant that God ratified with Abraham. Biblically speaking, it must take place on the eighth day and while it cannot be performed without a certain degree of pain, it has proven to be the best age for both hygiene and healing purposes. Anybody having attended a bris (Jewish ritual circumcision) knows that the procedure takes only seconds and is done by professionals.
Muslim circumcision on the other hand, while not mandatory, is strongly recommended for “purification” and doesn’t have an age limit or requirement. Teenage boys are often circumcised as a sign of passage from childhood to adulthood. Which do you think would be more traumatic: “8 days old or teenage years?”
What about all the African countries that perform circumcision on both males AND females in conditions that are so far removed from proper hygiene?
Why is it that we never see cartoons depicting any of these rituals but only see the “horrors” of Jewish circumcision. Could there be an agenda of stigmatization here?

•    Jewish people are the devil personified: Myth or fact?
The demonization of the Jews is not a new invention. It comes from the Middle Ages and even from some of the early Church Fathers or even Martin Luther who took a few words of the Bible and saw it fit to twist them out of context and start painting the picture of “that devilish race the Jew”. From the distorted interpretation of biblical text such as John 8:44 where we read that the Jewish leadership is: “from your father the devil” we end up with uneducated people fearing the evil blood-sucking Jews.
In reality, Israel is the only democracy in the Middle-East and Jewish people are not only very educated but also highly philanthropic. Sure there might be some evil and unethical people in the Jewish community, but let’s be honest, they would be evil and/or unethical people who also happen to be Jewish and not because they are Jewish. That difference is hugely important!

•   Jewish people are liars and connivers: Myth or fact?
Again, if we look at the cartoon, the woman appears to be covering for the moel (Jewish rabbi trained to perform circumcision) by saying that what appears like bloody torture is simply based on a Jewish belief. A lie that two overly naive policemen are willing to buy as they apologize for the disturbance and leave the scene. The idea here is that Jewish people are devious and shouldn’t be trusted
The artist, when interviewed, claimed that his cartoon was not anti-Semitic but anti-religion in general. But in a day when antisemitism seems to be growing like a weed again in most of Europe, a cartoon like that one leaves no doubt about the goal of the artist and the support of the media platform it was published in. Why didn’t the artist depict a Muslim circumcision for instance? The answer is simple. While the offended Jewish community might demand a public apology and even sue the paper and/or the artist for defamation or hate speech, the Muslim community’s reaction ( as seen in the recent past) might and most likely would incite violence and property damage.
Again, I do not support the idea that all Muslims are violent and aggressive towards those who do not share their views, but it is clear that they increasingly building a reputation quite different from other people groups of any religions.
Jewish people have never blown up an embassy!
Jewish people have never taken the street in a violent protest!
Jewish people have never threatened anyone with death for being offended!
Like I have mentioned before, the 1930s are upon us again and the world seems quite at peace with having the Jews as the new scapegoats of humanity. Yet I believe that the well-intentioned attempt at pulling the post-Holocaust weed of anti-Semitism was superficial at best. The root remained deeply planted in the European soil and is yielding new shoots again.
If all you ever wanted to know about the Jewish people can be found in one cartoon, it certainly shouldn’t be the one recently published in the Norwegian newspaper. In reality, the safest way to learn about God’s chosen people is to read God’s account about them in the Bible.
Shame on Dagbladet newspaper for publishing the cartoon!
Shame on the artist for drawing such an abrasive and anti-Semitic cartoon!
Shame on those who remain silent faced with such anti-Semitic propaganda!

“The road to Auschwitz was built by hate but paved with indifference!”
Abraham Joshua Heschel