Gone are the days when waiting for the bus, one was exposed to billboards and posters inviting them to try the best tissue, soft drink or candy bar. Advertising is as much a part of 21st century consumerism as it ever was, but the rules are changing. At least they are in San Francisco!
Last week, a series of ads started to appear on the side of municipal buses in San Francisco. 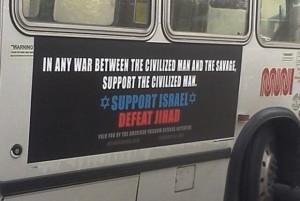 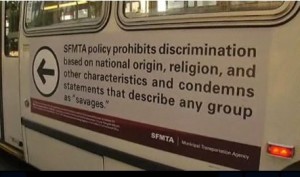 I am outraged because this is such a case of double standard and willful blindness. Multiple ad campaigns have appeared all across America that deface and demonize Israel but you NEVER see the people behind the medium used (such as MUNI) run counter ads to defend Israel. Of course not!
A precedent was set in San Francisco and based on the history of my people and the parallel timeline of anti-Semitism through the ages, I am certain that we will see more of the same in the months if not weeks to come. The scapegoat of humanity has ALWAYS been the Jew.

HOW MANY DIFFERENT WAYS CAN YOU SPELL ANTI-SEMITISM?