Home » Blog » Why Do We Still Remember?
Spread the love

January 27 is International Holocaust Memorial Day and this year also happens to be the 70th anniversary of the Liberation of Auschwitz-Birkenau. Soon after the 1945 opening of the death camps and rescuing of those who had miraculously survived, a motto was born: NEVER AGAIN. Emaciated walking corpses believed in that statement and many of them tried to look towards a brighter future or any future if even possible. Seventy years later, most of these survivors have passed. Could it be that they have taken their motto with them? 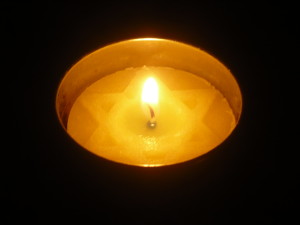 As it appears in some places, there is a tragic “Holocaust fatigue” plaguing the world these days. The BBC just tweeted the following statement: ” Is the time coming to lay the Holocaust to rest?”, demonstrating quite clearly that they either have a very short memory of the events of two weeks ago in Paris or that they simply are clueless about what is appropriate. But they are not alone in this postmodern quest to minimize the Shoah. They might not be deniers or revisionists but in their process of watering down the “Catastrophe” or even asking such a question, are they helping those who flat out reject the Holocaust? So they ask the question: ‘Why do we remember ?” I could answer that question but instead, I will let Evelyn do that.

In the 1970’s, Evelyn was in her forties, sitting in a park on the east side of Paris, watching her young boy playing with schoolmates after school had let out. This was a daily routine for Evelyn, as she was sitting on a park bench watching people. Suddenly she overheard two ladies that she knew from her small town having a discussion. It wasn’t long before the two ladies started to denigrate the Jews in their own words. Evelyn knew them and they knew her. She had not told them or anybody in town that she was Jewish, but that day was too much, so she interrupted the ladies and with all the boldness she could muster, she looked them in the eyes and said:” You know that I am Jewish, right?” The two ladies were taken aback and very embarrassed, while Evelyn was liberated from the prison of her Jewish identity.

That afternoon, as Evelyn walked back to her house with her son, I wonder how much better she really felt? I wonder if when she approached her home, she remembered the day some 25 years ago when she saw the Gestapo coming to that very house and taking her father Maurice to his death in Auschwitz -Birkenau? As she walked through the small corridor leading to her front door, she could probably visualize her father hiding in the cellar in 1942, right under her feet.

It had taken 25 years for Evelyn to dare speaking out and telling others she was Jewish. She remembered the time she spent in the South West of France, hiding on a farm in a small village near the town of Pau. She didn’t know it then, but her life was being preserved by a family of simple peasants who would later be recognized as “Righteous Gentiles” by Yad Vashem.

Evelyn is now 87 and she still lives in the same house. She has had a full life. She has two children, five grandchildren and four great-grandchildren. In a sense, that is the best revenge that the Jewish people could have had after the Shoah. Survivors got up, got better and started families to prove once more that God will never completely forsake Israel (Jeremiah 31:35-37).

Evelyn remembers all these events very well. But she is scared again. When the Paris terrorist attacks of early 2015 took place, she was very nervous. The Kosher Supermarket was only a few hundred yards from the house she lives in and only 30 yards from one of her granddaughters’ apartment. When her son called to check on her and ask her to stay inside, she started crying and said:” They’re coming back aren’t they”? Her son didn’t quite know what to say.

Why do we still remember the Shoah? Because current antisemitism could lead to another catastrophe if we allow our minds to even entertain the idea that the Shoah needs to be archived into history.

Why do we still remember the Shoah? Because people like Evelyn are real and they went through a real nightmare.

Why do we still remember the Shoah isn’t even the question to ask.

Evelyn is my mother, and the real question is: “How dare we forget?”