You are here: Home / Antisemitism / There Wouldn’t Be Christmas If It Wasn’t For Hanukkah! Part I
Spread the love 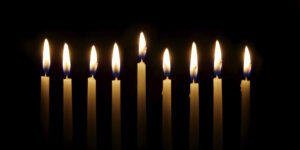 What a statement to be making, “There wouldn’t be Christmas if it wasn’t for Hanukkah!” To most people, this might sound like an oxymoron, but I would beg to differ. So, let’s look at the biblical and historical origins of Hanukkah, its modern practice, and finally, let’s investigate to see if it has any connection to Christmas (you might be surprised!) The feast of Hanukkah is known as either ” The Feast of Dedication” or “The Festival of Lights”, and it actually is both. The word itself means “dedication.” As you will see, Hanukkah teaches us how God delivered and preserved His people and prepared the world for the arrival of the Messiah, Yeshua of Nazareth.

Historically speaking, the events that led to the creation of the Feast of Hanukkah are found in three of the four books found in the Apocrypha, known as “Maccabees I, II III and IV.” The reason that I speak of the historical record and not biblical is that evangelicals do not accept the Apocrypha as part of the inspired word of God found in the Jewish Bible. This doesn’t mean that their historical accuracy is in question, but simply that the authors of the story were not inspired by the Spirit of God to record the events. Details about the Maccabean revolt are found in I, II and IV Maccabees.

Additionally, the great Jewish historian Josephus wrote about Hanukkah in his Antiquities, in which he calls it “The Festival of Lights”, ” Now Judas celebrated the festival of the restoration of the sacrifices of the temple for eight days, and omitted no sort of pleasures thereon; but he feasted them upon very rich and splendid sacrifices; and he honored God, and delighted them by hymns and psalms. Nay, they were so very glad at the revival of their customs, when, after a long time of intermission, they unexpectedly had regained the freedom of their worship, that they made it a law for their posterity, that they should keep a festival, on account of the restoration of their temple worship, for eight days. And from that time to this we celebrate this festival, and call it Lights. I suppose the reason was because this liberty beyond our hopes appeared to us; and that thence was the name given to that festival.”

Biblically speaking, Hanukkah is not included in the Levitical feasts of the Lord found in Leviticus 23. Similar to the feast of Esther known as Purim, Hanukkah is a post-biblical holiday. It is a celebration that was instituted as the result of a significant event in Jewish history. The prophet Daniel tells us quite a bit about this event and about the rise and fall of Antiochus IV Epiphanes. He also was a type of the Antichrist that will come to the world’s stage in the future. In Daniel 11:3, we are told “And a mighty king will arise, and he will rule with great authority and do as he pleases.” This is a reference to Alexander the Great, the mighty Greek leader who conquered the known world, mostly from 333 BCE to 323 BCE, before his sudden death at a young age.

Alexander the Great didn’t dislike the Jewish people, but after his death, when his kingdom was divided between his four generals: Cassander of Macedonia, Lysimachus of Asia Minor, Seleucus of Syria and Ptolemy of Egypt, things quickly changed. According to Daniel 11:4, “But as soon as he has arisen, his kingdom will be broken up and parceled out toward the four points of the compass, though not to his own descendants, nor according to his authority which he wielded, for his sovereignty will be uprooted and given to others besides them.”  Daniel 11:5, 6, 9 and 11 tell us about the “King of the South” (Egypt) raging war against the “King of the North (Syria) for control over Israel, seen as a buffer zone. This took place between 331 BCE and 198 BCE, but in 198 BCE the Seleucids (Antiochus) gained control (Daniel 11:15, 18, 19).

Eventually, Antiochus IV acted against the Jews as we see in Daniel 11:29-31, “At the appointed time he will return and come into the South, but this last time it will not turn out the way it did before. For ships of Kittim will come against him; therefore he will be disheartened and will return and become enraged at the holy covenant and take action; so he will come back and show regard for those who forsake the holy covenant. Forces from him will arise, desecrate the sanctuary fortress, and do away with the regular sacrifice. And they will set up the abomination of desolation. The next verse (v. 32) speaks of the Maccabees, “By smooth words he will turn to godlessness those who act wickedly toward the covenant, but the people who know their God will display strength and take action.”

Frankly, we get quite a bit of detail in the prophet Daniel to help us understand the Maccabean revolt against Antiochus, the rededication of the Temple and the inauguration of the Feast of Hanukkah. We do not get quite as much as in the three apocryphal books of the Maccabees, but the stories correlate nicely, considering that it took place a long time ago. That was almost 2200 years ago. Antiochus eventually desecrated the Jewish Temple in Jerusalem, massacred many Jewish people and outlawed Judaism altogether. He even sacrificed a pig on the Temple altar to further humiliate the Jewish people. He simply hated the Jews.  But a simple Jewish family from the village of Modi’in wouldn’t remain silent. Mattathias and his five sons known as the Maccabees (meaning “hammer” in Hebrew), led a revolt against their oppressor. It took eight years, but they managed to liberate and retake the Temple from Antiochus and free the Jewish people from Hellenistic domination. And so, the story continues to this day.

They proceeded with the rededication and decided to relight the eternal light of the Temple menorah. They needed special consecrated olive oil and only had enough for one day. They lit the menorah and went on to prepare more oil knowing that the process would take a week. The story tells us that the one-day reserve miraculously lasted for the whole week until the new batch was ready. And so, the Feast of Dedication was born. We celebrate Hanukkah for eight nights, as we light a candle on the first night, two on the next night, and so on. The menorah, also known as a Hanukkiah, has nine branches (a regular menorah has seven). One of the branches is either displayed forward or to the side, but always a bit higher. It is called the shamash or “servant” candle as we light it first and use it to light the other ones and recite the Hanukkah prayers, “Blessed are You, Lord our G‑d, King of the universe, who has sanctified us with His commandments, and commanded us to kindle the Chanukah light.” and “Blessed are You, Lord our G‑d, King of the universe, who performed miracles for our forefathers in those days, at this time.”

We also eat a lot of foods that are fried in oil to remember the miracle of the oil. We eat potato pancakes called latkes, and jelly-filled donuts called sufganyot. Additionally, we spin little tops called dreidels on which four letters are inscribed meaning “a great miracle happened here” (for dreidels used in Israel) or “a great miracle happened there” for dreidels used anywhere else in the world. The modern observance of Hanukkah has often been called the “Jewish Christmas” because gifts are exchanged for eight nights, and the fact that it starts on the 25 of the Jewish month of Kislev which is believed to be the day that the Maccabees defeated Antiochus IV in 165 BCE, (almost always in December within a few weeks of Christmas.)

So, Hanukkah is a time of great celebration of how God preserved, protected and provided for our people. It is a festival of dedication and a festival of lights. It is often said that the Jewish people got a new holiday for each time that the world tried to kill them. And with that holiday, usually come special foods (Passover, Shavuot, Rosh Hashanah, Purim, etc.) So, in Jewish circles, we jokingly say, “They tried to kill us, we won, let’s eat!” And yet, there is another aspect of the Feast of Hanukkah that cannot be missed, and it has to do with its connection to Christmas and the birth of the Jewish Messiah. Oh, and by the way, Yeshua, the Jewish Messiah did celebrate Hanukkah and we can read about it in the New Testament. But to find out, you will have to wait until next week for part II. So, do yourself a favor, go fry some potato latkes. Chag Sameach, Happy Hanukkah and see you next week for the rest of the story.