You are here: Home / Antisemitism / Mr. Trump doesn’t need to be less antisemitic, he needs to be more presidential!
Spread the love 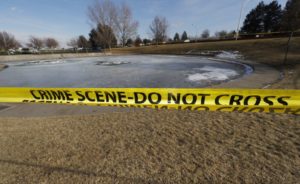 Since January 2017, nearly 60 Jewish community centers have received bomb threats over the phone. This happened over many states, and in some cases more than once at the same location. As it turned out, none of the threats led to the discovery of any bombs. This is now the fourth wave of such bomb threats against Jewish institutions in America. Each time such a phone call is received, the targeted center is obligated to stop all activities and evacuate their premises in an emergency, waiting for the police and or bomb squad to clear them back in.

Depending on the activities taking place at the time the bomb threats were received, children , young adults and/or elderly people had to be evacuated. In all cases it was absolutely necessary yet extremely inconvenient. There is no way that any of these threats could be ignored or blindly assumed to simply be phone pranks. The one time that a telephone bomb threat is ignored could be the one time that it is a real one and the ramifications would be disastrous. Are these threats against various Jewish community centers considered terrorism? Are they considered hate crimes? Are they even considered acts of an antisemitic nature?

Police consider these threats to be hate crimes and take them very seriously. From the standpoint of the disruptive factor and the fear of the unknown, they are very similar to acts of terrorism. Just like terrorism, these bomb threats have materialized in unexpected locations at unpredictable times over an incalculable period of time. But even all these factors compounded do not constitute acts of antisemitism, although the frequency and high number of occurrences could prove otherwise.

To remove all doubt, we have to start looking at the content of the messages left on the phone when some of the threats were made. One such recording received on January 18, 2017 was made available. It’s transcription is a follows: “It’s a C-4 bomb with a lot of shrapnel, surrounded by a bag (inaudible). In a short time, a large number of Jews are going to be slaughtered. Their heads are going to [sic] blown off from the shrapnel. There’s a lot of shrapnel. There’s going to be a bloodbath that’s going to take place in a short time. I think I told you enough. I must go.

When a threat is made over the phone, it is always to be taken seriously, even if it targets people in general. But when the person giving the threat claims that “In a short time, a large number of Jews are going to be slaughtered,” there is no longer any doubts as to the antisemitic nature of the call. During the same period of time, nobody reported bomb threats to any Christian organization, Mosque, Buddhist temple, Mormon ward, Jehovah’s witness kingdom hall, etc. You get my drift! The threats were made ONLY to Jewish community centers. There should be no question in our mind that these were antisemitic actions.

This wave of bomb threats prompted some really concerned Jewish leaders to look for answers. Recently, at a White House press conference, orthodox Jewish reporter Jake Turx asked President Trump what the government intended to do to fight the new wave of antisemitic bomb threats. He asked the President “What we haven’t really heard being addressed is an uptick in anti-Semitism and how the government is planning to take care of it,” The response was unexpectedly rude and rather disconnected from the question. I don’t believe for a moment that President Trump avoided the topic on purpose, but I believe that he completely missed the point made by the reporter.

Mr. Trump could have simply answered–even if he was unaware of anything being done– that his government was working on a solution and that he clearly opposed antisemitism. Instead he very rudely interrupted the question and turned it around to sound like an accusation of antisemitism on his part. This was an embarrassing moment. But even Jake Turx understood it when he later stated that he still supported President Trump and that he firmly believed that his question had been misunderstood.

I don’t believe that we can accuse President Trump of being an antisemite. Even Benjamin Netanyahu said that the question “could be put to rest,” during his first visit at the White House. Nevertheless, Mr. Trump needs to be more presidential and less reactive. He needs to listen better to questions and not be so defensive, leading him to give short, rude and disconnected answers. He had a great opportunity to solidify his ties and reaffirm his true appreciation for the Jewish community and he really missed it. In the end, I still believe that his actions will speak louder than his words in a positive way–something many previous US presidents from both parties cannot claim.

I truly believe that having a president who never was in politics before is a breath of fresh air from many standpoints. It has many advantages. His awkward, disconnected and arrogant rhetoric definitely isn’t one of them!