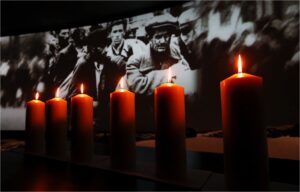 Here we are again, approaching the day that the international community has chosen to remember the Holocaust. It is different from Yom HaShoah (Day of the Catastrophe) which falls annually, a week after Passover in Israel (started in 1953). Each year, on January 27, the international community remembers the Holocaust in various ways from synagogue services to vigils to educational events that include Holocaust survivors or scholars. Survivors are dwindling down to a few thousand globally. Considering that anybody born at the onset of the war in 1939 would be eighty-two-years-old today, most survivors of the Holocaust are in their late eighties or early nineties. Soon, they will all be in our memories. Or will they?

Remembering the atrocities committed by Nazi Germany during World War II by observing International Holocaust Remembrance Day is critical. This is an anniversary that was set up by the United Nations. Living at the time of history nearing the complete loss of the remaining survivors of the Holocaust, remembering the uniqueness of the Holocaust is crucial to the future of humanity in general and the preservation of our global Jewish community in particular. The motto of “NEVER AGAIN” arose soon after the closing of World War II and has been the ongoing creed of all those who want the Holocaust to be remembered.

Many people are displaying what could be called “Holocaust remembrance fatigue”. Questions arise like, “Why do people see the Holocaust as such a unique event in the history of mankind?”, “Why are we talking about the Holocaust again?”, “Could we also remember other genocides?”, “Was the Holocaust exaggerated?” These are all great questions. But considering that a large percentage of millennials cannot name one concentration camp and cannot even say how many Jewish people died in the Holocaust, we cannot remain silent.

Why do people see the Holocaust as such a unique event in the history of mankind?
It has been argued by many that the Holocaust stands as a unique event in the history of humanity. Recently, Yad Vashem in Jerusalem has been at the center of a controversy with the possible appointment of a new chairman. Benjamin Netanyahu has tried to appoint Effi Eitam as the new head of Yad Vashem and has received a lot of criticism for it. For now, Eitam’s nomination is on hold because of some of his words and actions against Palestinians during his tenure in the IDF. It is clear that Yad Vashem needs a strong voice to perpetuate the memory of the Holocaust to the next generations, but people are divided on the uniqueness of the Holocaust. Some believe that it was a terrible genocide that must be remembered like the Cambodian genocide (1975-79), the Armenian genocide (1915-22), or the Rwandan genocide (1994). Incidentally, these three horrific carnages amount to 5.8 MM death total, which is less than the Holocaust alone. However, numbers are not everything; because any way you look at it, one death is one too many! All the genocides of history are tragic events showing how the deep depravity of the human race has led many to commit heinous crimes against their fellow men. There are no excuses for any of them.

I belong to the group of people who believe that the Holocaust was very unique and as such, holds a special place in the somber pantheon of crimes against humanity. My intention is not to minimize the atrocities of any of the other genocides of history. Every other genocide was a result of one people group declaring hegemony over another people group and committing ethnic cleansing to push that group into oblivion, or at least to get them to leave the area. This why I believe it was unique.

Only during the Holocaust were the victims hunted down by Nazis way beyond German borders. That is why it is unique. In any other genocides, the potential victims had an opportunity to move to a different area or even emigrate to another country and many did. In the case of the Holocaust, Nazis went out of their ways to round up all the Jews they could find in Europe. How far did they go? As far as the railroad systems of Europe would allow them. Cattle cars packed with over 80 people with no food, water, or sanitation were brought to camps and ghettos inside and outside of Germany. Foulness and humiliation soon followed, and many died during the journey. No visible Jew was safe anywhere in Europe. This obsession that Hitler had with bringing Jews back to their death was possibly a factor in his final defeat. In “The Destruction of European Jews”, Historian Raul Hilberg quotes Heinrich Himmler who from 1943 onwards, was the Chief of German Police and Minister of the Interior, including the Gestapo and the Waffen-SS. Himmler was clear about his destructive goal. As Jews were being decimated and a potential war labor force with them, he was quoted saying, “Economic questions should not be considered in the solution to the Jewish question.”  Hitler and his cohorts were so possessed with eradicating all Jews from Europe that they ignored everything else.

Why are we talking so much about the Holocaust?
A lot of people, including some Jewish people, feel that the Holocaust is discussed too much and too often. Frankly, I wish that I wouldn’t have to discuss it so much, but I do. Nobody ever questions the Fall of the Roman Empire in AD 476 or the coronation of Emperor Napoleon Bonaparte in 1804, as that would be irrational since it has been part of history for so long. Nobody ever doubted Sir Winston Churchill or Albert Einstein ever existed, because there are so much film footage and photographs of them. Yet, the Holocaust is now being put into question. Regardless of the myriad of recorded first-hand accounts, photographs, newsreels and artifacts, some people have the audacity to claim that it never happened. They are known as historical revisionists or Holocaust deniers. They write books, make movies and appear on TV programs, doing their very best to inculcate upon the uneducated minds of many the idea that the Holocaust was a hoax or at the very least Jewish propaganda to steal the land of Palestine and illegally settle the Jews in it. This is why I continue to speak about the Holocaust. Not to mention that one of the six million Jewish victims was my maternal grandfather Maurice Weinzveig, taken by the Gestapo out of his Paris home in the summer of 1942 to die a week later upon arrival at Auschwitz-Birkenau.

What about the nonchalant use of the swastika by teenagers who tattooed it on their shoulders and posted their selfies on social networks? They either knew what it represents, ignored it, or worse… they used it as a slap in the face to the Jewish community. They possibly didn’t know exactly what it means, which is another reason why Holocaust education must go on. If we don’t, between the ignorance, fatigue and malicious deconstructing, in twenty years or less, the Holocaust will have become a myth that might not even get a mention in history books. God forbid!

So, now what? We all have to become Holocaust advocates and fight antisemitism as if we were the last person who believed in that fight. In that process, we are guaranteed to find more like-minded people who see the importance of Holocaust education and the fight against antisemitism and all other kinds of xenophobic habits.

As much as I believe that the Holocaust must be taught starting in Middle school and upwards, it is upon us to educate ourselves and share our knowledge within our own family units and various spheres of influence. We cannot wait for or rely on others to take on this important task. Here are a few things you can do to make sure the Holocaust is never forgotten and that the call of “never again” will be remembered:

Listen to a Holocaust survivor: As time passes by, for most of us, it can be challenging to meet one in person. The powerful work of the staff at The Holocaust and Antisemitism Foundation brings many testimonies from survivors on video, and by virtue of that medium, renders their unique stories eternal. Additionally, the Steven Spielberg Shoah Foundation has over 54,000 video testimonies of survivors that are there to stay. Every single one of them is poignant and memorable in its own way.

Visit a Death Camp: Walking alongside the one-way train tracks and through the eerily empty barracks and on the death-camp grounds will leave an indelible mark in your memory. The Death Camps are the gruesome monuments left over from one of the darkest periods of mankind’s history. If at all possible, everybody, and most definitely every Christian should walk through one of them once in their lifetime.

Read an account of the Holocaust: From survivors’ accounts to biographies, historical accounts and even poems, the choices are many. Every human being should read the short but life-altering account of Elie Wiesel’s time at Auschwitz-Birkenau retold in Night, his story of resilience and survival against all odds.  A detailed and accurate account of the Holocaust can be found in Lucy Dawidowicz The War Against the Jews or in The destruction of the European Jews by Raul Hilberg. If you are not a reader, you can always watch Schindler’s List.

It is our duty as human beings to remember the Holocaust, retell its history to the current and future generations and resist antisemitism by speaking-up against those who deny that it ever happened.  Don’t rely on others to remember the uniqueness of the Holocaust! Don’t wait for someone else to come alongside or speak up in your place. speak up and remember because it is the right thing to do!