Home » Blog » Anti-Semitism In Our Backyard!!!!
Spread the love

Sometimes one doesn’t have to go very far to experience the vitriolic effects of anti-semitism. The University of California Irvine (UCI) that hosts up to 30,000 students has for several years been the breeding ground for many anti-semitic discourses against Israel and the Jewish people. I can surely appreciate the fact that we in America benefit from Freedom of Speech, but how far will we let that go and how “tolerant” do we need to be.In my research of over a decade, I have come to the realization that tolerance to Islam and to some extent, “radical Islam” (see Newsweek issue, March 9, 2009), has always been a one way street. Actually, tolerance in the name of multiculturalism isn’t even a one-way street, it is pushing Americans slowly but surely towards the back of a cul-de-sac. We “Freedom Loving Americans” are loosing ground daily.

UCI organizes a yearly event on their campus where Muslims such as Amir Abdel Malik Ali (link) and Islam supporting personalities are invited to speak on topic such as: “Israel:The Politics of Genocide”, stating that Zionists are the 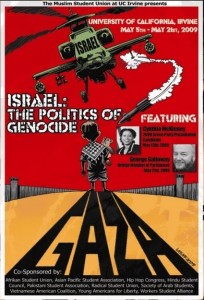 “New Nazis” or the “Party of Satan”.
The poster for this year’s event speaks loudly of the hatred for and lies about Israel.
Israel is once again portrayed as the agressor, murdering innocent, harmless and weaponless Palestinian children.
The UCI Mulsim student union seems to be sponsoring an event full of hate.
Maybe the evangelical students should hold hands with the Jewish Student Union, after all, true Bible believing Christians might be the only friends Israel has left?
They should join forces and promote “Love Week”. A weeklong event promoting the Judeo-Christian ethics of loving our neighbors.
Heck, they might even meditate on Matthew 5:43-44 and promote the love of and prayer for our enemies.
Yeshua (Jesus) came to die for the whole world, including Muslims.
You might think that I live in a dream world, but I strongly believe that the only way for Muslims, Christians and Jews to get along, is for all of them to recognize that they fall short of God’s Glory (Ecclesiastes 7:20, Rom 8:23), repent and invite Yeshua to become their Lord and Savior.
Then, and only then, with Yeshua in the center and focusing on His glory and not our shortcomings as sinners, will we get along.
YESHUA IS THE ONLY ANSWER!!!
1,902