You are here: Home / Antisemitism / 2021: Revolution, Resolutions or Fulfillment of Prophecy?
Spread the love 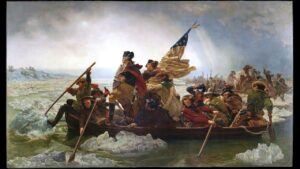 Usually, when we start a new year, there is a sense of renewal, a fresh start and new resolutions to get us going on the proper footing. Let’s be realistic, there is nobody on this planet who doesn’t want 2021 to be better than 2020. The pandemic, the race riots, the economic rollercoaster and the presidential elections have made last year a memorable one, and not so much from a positive perspective. And yet, for several reasons, January 2021 is looking like an extension of 2020.

The upcoming changing of the guard at the presidential level is currently punctuating every aspect of American life. People have never been so polarized since the Civil War and there doesn’t seem to be much of a light at the end of the tunnel. Many people are being silenced, crippled and isolated. Where is this going?

When I look at the current exponentially growing censorship of conservatives by Big Tech, I am immediately taken back to what happened to my family in the 1930s and 40s in France. I know that some will be tempted to accuse me of using ghetto and Holocaust analogies flippantly when the topics should be left alone. Truly, too many people are using Holocaust comparisons cheaply to make their case more dramatic, but when the shoe fits!

I still remember my father telling me how his father–who fought the Great War of 1914-1918 as a French citizen– was one of many Jews being asked to bring their bicycles to the nearest Paris police station. Most of them, including my paternal grandfather, complied quietly, and self-imposed a forced limitation of their movements within their country, and it worked well for the Nazis.

Next, the Jews of France were asked to bring their transistor radios to the same police stations. Again, most of them complied and soon found themselves staying home with no means of knowing what was going on in the world. This was a time when exiled General Charles De Gaulle was broadcasting information from the United Kingdom on a daily basis.

The next step was to isolate the Jews even further by grouping them in ghettos, so that they could be concentrated in a specific area, with almost no way to communicate with the outside world. It worked very well for the enemies of the Jews. It still wasn’t enough as it led to Kristallnacht in Germany and the “Final Solution to the Jewish question” all over Europe.

Yes, I absolutely see some similarities between the times we live in and the 1930s and 40s. Christians and conservatives are being silenced and censored with a final agenda of isolation with almost no possible communication. Glenn Beck accurately compared where we are today to the era of World War Two when he said,“This is like the Germans with the Jews behind the wall, they would put them in the ghetto. This is the digital ghetto. ‘You can talk all you want, Jews, do whatever you want behind the wall’…And that’s where we are. That’s where millions of Americans will be.” It does appear as if we are being forced into a “digital ghetto.”

While most Jewish people lean more towards liberal, progressive views; we are usually the first ones to suffer and often for different reasons that are not connected to the economy, politics or a pandemic. We are targeted because we are Jewish, and even though it is incredibly irrational, Jews have been accused of bringing the virus to the world–strangely reminiscent of the Black Plague libel. We have also been accused of controlling the banks and the economy–also reminiscent of the Middle Age libel about Jews being greedy and controlling European wealth.

What about the vaccine? how many people will not want to take it? Will we have a choice? It is hard to tell this early in the game, but we cannot ignore the Bill the state of New York is working on, known as Bill A416. It is currently only at the committee level and has a long way to go before it becomes law, if it ever does. The gist of it is simply the establishing of a system by which the Governor of the state of NY has the right to isolate people he deems dangerous to the health of other people, and place them in detention centers until they are assessed and deemed fit to re-enter society.

I need to confess that I have been pulled down into the cesspool of the current political debate for a good share of the last few months. I went from amazement to frustration to anger to resentment to bitterness. As a result, I completely lost my focus on what God has really called me to be, an ambassador of the Good News to the Jewish people and also to the Gentiles, as well as a watchman and soldier against antisemitism of all sorts.

New resolutions are not easy to make; and this is why people make them and often break them soon after. Going on a diet, quitting smoking or changing any habit or addiction requires sacrifice and self-discipline. As believers, we also can rely on the Holy Spirit to convict us and enable us to stick to our resolutions. Things might change. Only time will tell; but for now, I believe that new resolutions may be more important to believers in Yeshua than a new revolution.

For the time being, I desire to commit to the only agenda worth my time as a modern disciple of Yeshua, and that is the furthering of His kingdom on earth. This doesn’t necessarily mean that I will become a hermit, ignore the news and put my head in the proverbial sand of ignorance. I am a legal citizen of the United States of America for the remainder of my time on earth, and I have to respect that and the laws that come with it. Yet, if I am forced to do things that boldly go against what Yeshua teaches, I will be forced to make a choice. Mine is already made.  How about yours?

There is plenty to do for those of us who can focus on what the Lord would have us do. I will continue to fight antisemitism the best way I can in writing, speaking, preaching and educating; because I know beyond the shadow of a doubt that it is one of the burdens that God has given me. I also believe that it will continue to open doors for me to share the love of Yeshua.

I might be a legal citizen of the United States, but I am also a citizen of heaven who was purchased by the blood of Yeshua at His sacrificial death 2000 years ago. My citizenship in heaven should always be my focal point, as I am reminded by the great prophet Moses in Psalm 90 (the only psalm written by Moses) where he said, “As for the days of our life, they contain seventy years, or if due to strength, eighty years, yet their pride is but labor and sorrow; for soon it is gone and we fly away…. Let Your work appear to Your servants and Your majesty to their children. Let the favor of the Lord our God be upon us; and confirm for us the work of our hands; yes, confirm the work of our hands.”

Furthermore, our time here is but a breath or a vapor as James 4:15-17 tells us, “Yet you do not know what your life will be like tomorrow. You are just a vapor that appears for a little while and then vanishes away. Instead, you ought to say, “If the Lord wills, we will live and also do this or that.” But as it is, you boast in your arrogance; all such boasting is evil.  Therefore, to one who knows the right thing to do and does not do it, to him it is sin.”

We as believers have been entrusted with the propagating of the Good News of Yeshua the Messiah. It would be wise to remember that those who started following Him at the onset of His ministry in Israel, did so – no strings attached and without worrying about their legal rights. Again, I am not advising that believers give away all their rights as per the US Constitution, but some things are worth fighting for while others are not. At the end of the day, fighting so that we can share the Good News is of the utmost importance. However, we also need to realize that some of the most successful evangelists were those who were persecuted, imprisoned and/or went underground.

Prophetically, the Bible promises much turmoil during the end times. It doesn’t predict an American revolution (America is not even mentioned in the Bible).  We are promised that the Lord will never forsake us, but that we will also suffer persecution because of Him. 2021 promises to propel us even closer to the final pages of the Bible. To be honest, sometimes I feel like the prophetic future isn’t so future anymore. Even if time is of the essence, the Good News is still the best message to be shared. So, if I must spend any time focusing on the future, let it be because I care about those who do not have theirs secured in Messiah’s embrace.

Is God trying to get us on our knees? That is entirely possible and that shouldn’t scare us because it is when we are on our knees that we are the closest to Him!

I press on toward the goal for the prize of the upward call of God in Messiah Yeshua. (Philippians 3:14)