You are here: Home / Islam / Dhimmitude: The Weed that choked the West!
Spread the love

Like an unwanted weed in a well maintained garden, dhimmitude continues to invade Western civilization. Its steady growth only means one thing, and that is the progressive choking of Western values and freedoms to the point of death. Shariah could soon reign over the infidels (anyone who is not a Muslim) as global Islam enslaves them to its barbaric ideologies. We could all be dhimmis caught in an Islamic nightmare of Koranic regulations enforced upon us.

According to Islam, a dhimmi is a non-Muslim “subject” in a Muslim state. That person is required to pay a tax  known as the “jizya“for protection by the Muslim community. By definition, a “dhimmi subject” to Islam has less rights than a Muslim after they surrender to Muslim domination through a special treaty or “dhimma“.
As Islam started to grow and conquer different parts of the world, non-Muslims were essentially given three choices: Conversion, death or dhimmitude. The later placing them into some sort of limbo state where they were barely tolerated and certainly DID NOT have equal rights with Muslims. The only individual treated with even less respect by “orthodox Islam” might be Muslim women.
THE REALITY WAS AND CONTINUES TO BE THAT ALL DHIMMIS ARE SECOND CLASS CITIZENS WITHIN ISLAM.
But the weed of dhimmitude doesn’t grow well unless it is left alone where its roots of intolerance and hatred can run deep and choke its surrounding world. As I see it, there can only be three reasons for allowing oneself to be turned into a dhimmi: Ignorance, fear or stupidity. In many cases, it is difficult to determine the reason why a person, organization or even community would allow such a change to occur. But being out of fear, ignorance a bit of both or even stupidity, the status of dhimmi will undoubtedly lead to an increasing submission to Sharia law, only attainable by a simultaneous decreasing of the enjoyment of Western values and freedoms. Even though dhimmis may have benefited from some short periods of tolerance throughout the ages, THEY WERE ALWAYS AT THE MERCY OF THE RULING MUSLIMS WHO SUBJUGATED THEM. Jewish Author and activist Bat Ye’or is an expert on the subject and has covered it extensively in several of her books such as The Dhimmi: Jews and Christians Under Islam (1985) and The Decline of Eastern Christianity Under Islam: From Jihad to Dhimmitude: Seventh-Twentieth Century. (1996).
What Bat Ye’or almost prophetically announced to the west over 27 years ago was that dhimmitude was very real and potentially very lethal. In the preface to her book Eurabia: The Euro-Arab Axis, we read:
The entire Muslim world as we know it today is a product of this 1,300 year-old jihad dynamic, whereby once thriving non-Muslim civilizations have been reduced to a state of dysfunctional dhimmitude. Many have been completely Islamized and have disappeared. Others remain as fossilized relics of the past, unable to evolve.
To the critic of what may appear to be a witch hunt against Muslims on my part, let me clearly state that I believe that the first victims of the erroneous and hateful teachings of Islam are the Muslims themselves. Additionally, their passionate jihad against Israel and the West is nothing more than a case of “the blind leading the dumb”. Here are a couple of recent examples of 21st century dhimmitude in all its “splendor”.
• USA-February 2012: Best Buy Corporation provided CAIR (Council on American-Islamic Relations) with its “platinum sponsorship” for a CAIR’s annual banquet of their Minnesota chapter. CAIR’s link to the Muslim Brotherhood and Hamas led the US government to remove their non-profit status and  CAIR is currently considered an unindicted co-conspirator in criminal conspiracy to support a Palestinian terrorist group.  A petition is being signed by Americans desiring to boycott Best Buy. Now, that’s a boycott that I can support as opposed to the anti-Israel BDS (boycott, Divestment and Sanctions).
Also, let’s not forget that Minnesota is the first US state to elect Keith Elisson to Congress, who in turn requested successfully to be sworn in on the Koran.
• FRANCE- May 2012: François Hollande defeats Nicolas Sarkozy in the second round of the French presidential elections. It has now been reported that between 93% and 95% of French Muslim voted for Hollande. The new French President was put in office by a push from the Muslim community and how much of an “dhimmi president” will he really be will be determined in the near future.
Additionally, Mr. Hollande, just made a decision to never “let pork touch his lips again”. Dhimmitude or gratitude towards the muslim community of France who gave him the necessary push to win the election? time will tell! It will start small, but before you know it, the burqua will be re-introduced, prayer for muslims on Paris streets will increase and mosques will pop up like mushrooms.
HOW LONG BEFORE NOTRE DAME DE PARIS CATHEDRAL BECOME NOTRE MOSQUE DE PARIS?
But “dhimmis in deeds” are not alone, they are joined by a plethora of “dhimmis in words”. We cannot ignore that there is also dhimmitude or “politically correct cowardice” in the ongoing attempt by media outlets, political factions and even church denominations at redefining some keywords to delegitimize Israel and the Jewish people. The real meaning of words like anti-Semitism or anti-Zionism are constantly challenged by postmodernism and liberalism. Definitions based on truth must be established.
(click on image below) 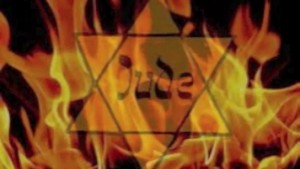 In this growing case of “the blind leading the dumb” there are still decent people left who want to share a world where all creatures are equal and equally loved by God (John 3:16). These people are found in my community. A community of Bible believing followers of Yeshua (Jesus).
I will not succumb to Islam and become a dhimmi because I can only serve one master and I have already pledged my unconditional allegiance to Yeshua who died for me, for you and for all Muslims as well. As a result, I am not a second-class citizen but a full citizen of Heaven
But for as many as received Him, to them He gave the right to become children of God, even to those who believed in His name. (John 1:12)