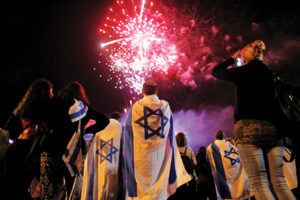 While last year was the memorable 70th anniversary of the birth of the modern State of Israel on May 14, 1948, every new anniversary is a reason to celebrate. This year is no different!
We celebrate because of Israel’s survival
In her entire history, Israel has been the epitome of survival. From the moment That God created a people, gave them a land and a law, Israel became a prime target in the world. From Pharaoh who didn’t know Joseph to Haman to the Amalekites, the Bible is already replete with Israel’s foes. Post-biblical history continues to trace the lineage of the Jewish people as it is punctuated by acts of anti-Judaism and anti-Semitism, going from verbal to violent to lethal, peaking with the Holocaust. In spite of all the anti-Semitic hatred, Israel has survived. In spite of all the wars against her from 1948 to today, and miraculously, Israel has survived. In spite of the current waves of terrorism, Israel will survive because Israel’s complete annihilation would make God a liar and covenant breaker (Jeremiah 31:35-37.)
We celebrate because of Israel innovative spirit
When the Jewish people started to organize under the leadership of Theodor Herzl and Chaim Weizmann in the late 1890s, survival was of the essence, but creativity went hand in hand with the spirit of survival. Zionism was the catalyst to a mass migration to the land of our ancestors. From a place of rocks, desert and almost no vegetation, Israel has become one of the world’s foremost providers of fresh produce. Drip irrigation was an Israeli invention out of necessity. Much more has come to our modern world from Israeli ingenuity. It makes the job of the proponents of the Boycott, Divestment and Sanctions Movement (BDS) very complicated if they choose to be ethically consistent, but they seldom do!
We celebrate because Israel is the only democracy in the Middle East
This little sliver of land the size of New Jersey almost becomes a drop of water as one places it within the whole ocean of Arab countries surrounding her. Muslim governments vary from somewhat moderate to fully Sharia compliant. Women, homosexuals and even people of other faiths are often abused verbally AND physically, with their rights taken away from them. The one country in the Middle East where Arabs and Jews can actually coexist (at least from an Israeli perspective), is Israel. There are even Arabs as members of the Knesset (Israel Parliament.)
We celebrate because Israel is a safe haven for the Jewish people.
Jewish people have been in the Diaspora (Dispersion), since the destruction of the Jewish Temple in Jerusalem in 70 AD. We can be found just about anywhere in the world, even though there is only 15 million of us. Yet, it is becoming increasingly evident that the only safe haven for Jewish people worldwide is Eretz Yisrael. Anti-Semitism is on the rise everywhere. Jews are being killed in Europe, the Middle East and even America, simply for being Jewish. Nevertheless, God promised that the Jews would return to the Land of Israel ( Ezekiel 37), and we are seeing it happening in our lifetime.
We celebrate because of God’s promises to Israel
Some people believe in God  while others don’t, but that doesn’t prevent God from keeping his promises for Israel, and they are numerous:
• God made a covenant with Abraham: Genesis 12:1-3

• God’s covenant was reconfirmed through Isaac, Jacob (Israel) and his 12 sons: Genesis 26:2-4

• Israel will never be destroyed because of God’s promise of eternal protection: Jeremiah 31:35-37

We celebrate because of Israel’s glorious future promised by God
As bleak as the present looks, especially from a human perspective, Israel has a guaranteed glorious future, and that is indeed a cause for celebration.
• God promised Israel a New Covenant when He will remember their sins no more: Jeremiah 31:31-34

• Israel’s glorious future is secure because of God’s character: Ezekiel 36:22-28