You are here: Home / Archives for Warsaw Ghetto 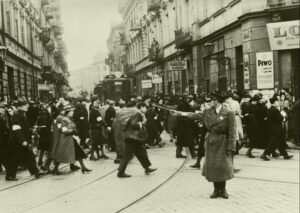 In a recent article that I wrote, I went over the results of a US survey made with the millennials and Gen Z community. The results were terrifying. One of the questions posed had to do with the ability to name a death camp or a ghetto. Incredibly, 48% of all respondents were unable to name anything, and in some states, it was as high as 60%. Historically, Auschwitz and the Warsaw ghetto are the most known names within that category, and yet half the people didn’t have a clue at all.

This month we remember that eighty years ago in October 1940, in Poland, the Warsaw Ghetto was established. But what is it exactly that we remember, for those of us who do remember? So much can be said about the Warsaw Ghetto, and so much can be learned from what happened there and how it happened. To be sure, the concept of the ghetto didn’t get invented by the Nazis to control the Jewish population, but it was simply re-introduced and “put on steroids” so to speak!

The word ghetto or geto is Italian for “foundry” which is the area where the first ghetto was organized in Venice, Italy in 1516 in the district known then as Gheto Vechio, some four hundred years before the Warsaw ghetto. The large Jewish community that had been expelled from Spain in 1492 was moving to Italy to relocate, and the Venetian community decided to keep things separated for better control. You can still visit the Venetian ghetto area to this day.

Fast forward to 1940. The Nazi Party is struggling to control the Jews. Holocaust historian and author Raul Hilberg explained that there was a progression in how the world got organized to first control and eventually get rid of its Jews, “Since the fourth century after Christ there have been three anti-Jewish policies: conversion, expulsion and annihilation. The second appeared as an alternative to the first, and the third emerged as an alternative to the second.”

While the final solution concentrated on the complete eradication of European Jewry, the institutionalization of the ghetto paved the way and helped to organize that step. Forced conversions and forced baptisms of the Jews to Christianity had been attempted for centuries and had resulted in the loss of many lives. Expulsion seemed to be a good option for those who wanted to get rid of the Jews. It had occurred in Europe on many occasions (England in 1290, Hungary in 1349 and 1360, France in 1394, Austria in 1421, Spain and Sicily in 1492, Portugal in 1497, Nuremberg in 1499, Naples in 1510 and Milan in 1597.)

But for Hitler and his Nazi murderers, expulsion didn’t yield the results expected. Things had to move further along and much faster. Ghettos started to get organized by the Nazis all over Europe as early as 1939. Jews were rounded up and sent to controlled and enclosed areas. Many smaller ghettos were started across Europe, with the first large metropolitan ghetto in Lodz in April of 1940, closely followed by the Warsaw ghetto in October of 1940. Erected brick walls and barbed wires formed new boundaries for various Jewish communities that would have to survive in their new communal prisons.

The ghettos were somewhat organized with occasional, Jewish traffic in and out of their limits, with special authorizations from the Nazis. The Jewish people did their best to maintain a semblance of communal life. Schools were organized and even synagogue services took place. But things started to deteriorate very rapidly. Food became scarce, living conditions were extremely crowded and sanitation was insufficient at best. Typhus and other infectious diseases started to plague the ghettos, and the death toll became very high. Over 43,000 people died inside the Lodz ghetto, and 76,000 within the Warsaw ghetto before the summer of 1942.

In a sense, the ghettos became clearing houses for the “final solution to the Jewish question”, a euphemism for the total destruction of the Jews of Europe.  Since the Jews were not leaving fast enough and the ghettos were bulging at their seams, something else had to be done to rid the world of the “Jewish virus.” Slowly but steadily, the Nazis started to deport the Jews out of the ghettos to the death camp of Treblinka, only 50 miles away.

Two heroes of the Warsaw ghetto are worth remembering. The first one was Mordekhai Anielewicz, the young leader of the Jewish Fighting Organization (ZOB) who led the Warsaw ghetto uprising. This was the largest Jewish revolt during World War Two, which inspired others of the sort in various ghettos and camps. He is remembered as the symbol of Jewish resistance during the Holocaust.

The other hero was a Polish-Jewish historian named Emanuel Ringelblum. He managed to chronicle Jewish deportation and ghetto life. His records were preserved inside tin boxes and large metal milk cans. They were respectively recovered in 1946 and 1950 and have provided the world with over 25,000 artifacts documenting the Holocaust and life in the Warsaw ghetto. This was a priceless find made possible by the selfless desire of a Jewish man to document the horrors he had to live through. Such courage!

What will happen to this crucial part of history if the proponents of the “Cancel Culture” movement had their way? I can only imagine! But there is something that we need to come to grips with even today. I believe that even though we are not seeing the brick and mortar walls being erected with barbed wires around Jewish communities, ghetto life is lurking again. The purpose of a ghetto is to separate, ostracize and control a group of people. Could it be that the global Jewish community is being rounded-up into a virtual ghetto?

The Boycott, Divestment and Sanctions movement is working hard at accusing Israel of apartheid, colonization and human rights abuse in an effort to ostracize the Jewish people. No physical walls are necessary, just paint the Jews into the unwanted camp.

The Campus Intifadas are indoctrinating our young people into believing that Israel murders Palestinians every day and inviting pro-Palestinian apologists to lecture on US campuses. Jews are excluded from the marketplace of ideas, ironically enough, under the guise of freedom of speech. No physical walls are necessary, just paint the Jews as the oppressor and the rest of the student body will gladly denigrate them.

The myriads of antisemitic acts all over the world are a constant reminder of the danger that Jewish people run, simply for “being Jewish” Cemeteries are being desecrated, synagogues set on fire, diatribes and libels are posted online on all social networks (even though Facebook and Twitter finally agreed to block and cancel Holocaust deniers on their platforms.) No physical walls are necessary, just accuse the Jews of the ills of the world, and the world will gladly pass judgment and inflict the verdict.

When the ghettos proved not to be enough for those who hated the Jews with every fiber of their beings, Jewish extermination became the next logical step. No “Cancel Culture” demagogue will be able to prove otherwise. Today, the Jewish people are no longer in a ghetto between four walls topped by barbed wire, but it can easily be argued that we are being ghettoized by the media, politicians, the entertainment industry and even some of the churches. I dare not imagine what’s next if indeed we do cancel culture and we let history repeat itself!

“Indifference to evil is worse than evil itself, and in a free society,
some are guilty, but all are responsible.”
Abraham Joshua Heschel