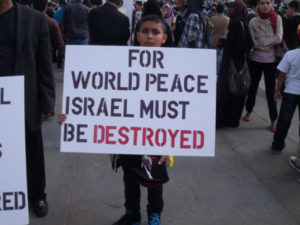 Jewish history is punctuated with important milestones –both negative and positive– such as the destruction of the Temple in Jerusalem in A.D. 70, The Crusades started in 1096, or even the re-birth of the modern State of Israel in 1948. One of these unavoidable milestone is the Holocaust. One cannot speak of or understand Jewish history outside of the events of this Jewish catastrophe. Historians even go as far as speaking of pre and post Holocaust Jewish history. Once we realize that the 6,000,000 Jewish victims represented about 2/3 of European Jewry, it becomes obvious. In light of all the acts of anti-Semitism that have occurred globally in the last decade and the many threats against Israel as a whole, one can ask “Is another Holocaust on the horizon, and if yes, can it be prevented?”

While the Bible promises us that God will never forsake Israel (Jeremiah 31:35-37) it also tells us that God is just and disobedience will be met with discipline. From a human perspective, despots from many authoritarian countries would love to see Israel completely eradicated from the face of the earth, but from a biblical standpoint, not only will they fail, but they will also pay a hefty price (Zechariah 12:9). This doesn’t mean that they will not try, and try they have and they continue to. So, even though there might never be another Holocaust, Jewish casualties can escalate in the near future, and yet, we can all do our part to alleviate some of it by learning from the past and adjusting for the future.

We need compassion:
Not everybody bought the lies of the Nazi Regime that painted the Jewish people as vermin or a sub-race to be eradicated. Those who did, simply felt like they were doing Europe a great service by killing the unwanted, and they justified it by looking at the Jews as not being human beings. But many had compassion as they simply looked at the misfortunes of the Jewish people and felt compelled to reach out, and in many cases provide safe haven and/or safe passage to other countries. Pastor Henri Trocmé and the villagers of Le Chambon in central France had compassion for their fellow human beings. To them, humanity came first and Jewishness second. They simply cared for their fellow men. When asked why she did it, one of the villagers–a key player in this conspiracy of goodness– answered “It was the most natural thing to do!” It is estimated that 5,000 Jews were saved from the nazi claws in that little French village alone.

We need creativity:
Beyond compassion, we also need creativity such as was displayed by the people of Chambon who when they received new jewish refugees, simply heard their pastor saying that a “new shipment of Old Testaments had arrived.” Then people would decide who would take them in.
Creativity was key to fool the Nazi war machine and it came in many different ways. How about the story of Vittorio Sacerdoti, the Jewish medical doctor who worked in a small hospital near Rome during World War Two? He is credited for having invented the false disease known then as Syndrome K. The hospital received Jewish people (sick or not) and he told the “patients” to start coughing uncontrollably when Nazi officials showed up. Dr. Sacerdoti presented the coughing as the highly contagious AND lethal “Syndrome K.” His creativity allowed for 45 Jewish people to be saved. Before you ask me if it is biblically OK to lie to save a life, consider the story of Rahab the Canaanite prostitute who lied to the King of Jericho to save the Jewish spies (Joshua 2:1-8.) She received faith in the God of Israel in the process. You draw your own conclusions!

We need courage:
Compassion and creativity will not avail to much if they are not strengthened with courage. Fighting for the truth is never easy. It was not easy in the days when people fought for different truths, even though common sense has always dictated that there cannot be multiple truth co-existing. But today, truth isn’t even in the picture anymore. People don’t seek truth anywhere, anymore, they just want social justice. Whatever brand of “social justice” THEY declare is the right one, is worth fighting for. People who seek truth today about the Middle East narrative will discover an Israel that the media, Hollywood and academia refuse to accept. Insults and abuse will abound against those who dare support Israel.

We need commitment:
Modern Christian Zionists have a long road ahead as they strive to support Israel and help the Jewish people. They have compassion given to them by God and can be creative to various degrees. They also have the courage that only they can get from God reassuring them from His Word that if He promised to never forsake Israel, whatever else He promised them is a sure thing. But even when we know that God is on our side, it can remain difficult to commit to the cause. Intimidation runs rampant against those who try to fight BDS, anti-Semitism or any of the anti-Israel agendas. If God is committed to the preservation of and provision for Israel, who are we not to be committed the same?

I often wonder what would the outcome of World War Two have been in regards to Jewish casualties if more people had had compassion, creativity, courage and commitment?  Not everyone could have been instrumental in saving 5,000 Jews or even 45 Jews. But what if more citizens of Europe had chosen to do something for the Jews as opposed to remain by-standers at best? I know from God’s Word that the future includes Israel, even though there will be casualties (Zechariah 13:9.) I also believe that we can all do more for the Jewish people this time around. The current hatred against my people will not stop anytime soon. In a sense, much of the world’s agenda is like an on-going Holocaust of the 21st century. But this time around, nobody can claim that they were unaware of what was being perpetrated against the Jews. All of us can do something when our heart is in the right place!