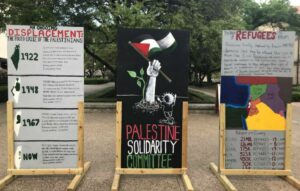 If you have been following my writing for the last two decades, you are already aware that “the oldest hatred” has been morphing from the taboo racial antisemitism of the 30s and 40s to a social justice struggle. Incidentally, another word for struggle is jihad! Antisemitism being the irrational hatred of the Jewish people characterized by thoughts, deeds or words against them, it now can come from any perspective, and it does!

When something is irrational, you can expect two things: First, it can materialize in any way under the sun, and second, it will be widely accepted by the masses even though it makes no sense at all. That is why we have been seeing people like liberals and progressives join forces with radical Islamists against Israel. They meet nowhere on the ideological spectrum on any topic except the annihilation of all Jews and the eradication of Israel from the map of the Middle East.

One place where antisemitism runs rampant and almost always completely unchecked is the Ameican university campus. This is the place where young people fresh out of high school come to learn and hopefully become equipped for life and career. These young minds are very malleable and usually very open to change their philosophical, social, political and/ or spiritual position. That is if they already had such a position before entering college. Many enter the campus with a belief in God and by the time they graduate, they have become atheists or agnostics at best. A university campus is a place of indoctrination like no other. This cannot be more evident than when it pertains to Jewish things.

The new antisemites have known that fact for quite a while now, and the educational platform has been used and abused to demonize, ostracize and even verbally and physically abuse the Jewish people. The American university campus has become the new training ground for the next generation of antisemites! Consider these staggering statistics from The AMCHA Initiative, which according to their own website is “a non-profit organization dedicated to investigating, documenting, educating about, and combating antisemitism at institutions of higher education in America.” These statistics are for the last year.

• Classical antisemitic incidents have decreased by 42%, but Israel-related incidents significantly increased by 70% in both number and intensity.
• Demonizing and delegitimizing Israel have increased by 32%.
• Expressions used to demonize Israel have increased from 22% to 147%.
• Promoting or condoning terrorism against Israel has increased by 67%.
• Promoting academic BDS (Boycott, Divestment and Sanctions) has more than doubled.
• Academic BDS-compliant behavior was linked to 86% of Israel-related acts of antisemitic harassment.
• The promotion of BDS-related activity has more than quadrupled.
• The number of events sponsored by school faculty and encouraging the demonization or delegitimization of Israel increased by 85%.

As AMCHA concluded‘ “our results suggest that academic BDS is itself simply a tool, albeit the primary tool on college campuses today, for carrying out the eliminationist goals of anti-Zionism. They also highlight the fact that attempts to promote or carry out anti-Zionism’s eliminationist goals can’t help but inflict direct and substantive harm on Israel’s on-campus supporters, particularly Jewish and pro-Israel students.”

These resulted in various behaviors including discrimination, attacks on freedom of speech, bullying, genocidal behavior, destruction of property and even physical abuse. Students don’t even have to be Jewish anymore, they simply need to be perceived as pro-Israel and they are at risk.

The American university campus has become the new training ground for the next generation of antisemites because this new generation is vastly illiterate when it comes to world history or even American history for that matter. When you don’t know who Stalin was or what Hitler did, you are more prone to judge history and current events, based on your own set of preconceived notions about social justice. As a result, you end-up believing in any narrative that paints victims and perpetrators as in the case of the Middle East crisis.

American college campuses are quickly becoming the most dangerous places when it comes to raising a generation of Jew /Israel haters. The indoctrination comes from academic sources and school faculty, which is even scarier because they should know better. So, it is often a case of educated people indoctrinating unaware, gullible students. One group is guilty of antisemitism by commission and the other one out of ignorance. In the meantime, Israel and the Jews are caught in the middle and suffer greatly. I don’t dare project when this generation will enter the workforce, ill-equipped to handle life, yet passionate about destroying Israel!