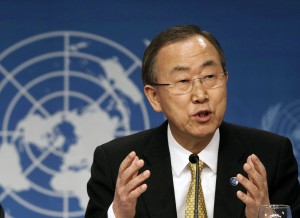 When the League of Nations (founded in 1920 after WWI) was replaced by the United Nations in 1945, the world was hopeful that the new organization would succeed in averting another world war–a feat that the League of Nations clearly failed at. The UN prides itself in promoting international cooperation and world peace. It even won the Nobel peace prize in 2001 (but so did Yasir Arafat in 1994.) The UN current Secretary is Ban Ki-moon (since 2007.) In the first article of the UN charter, we can read their purpose for existing:
1. To maintain international peace and security, to take effective collective measures for the prevention and removal of threats to the peace, and for the suppression of acts of aggression or other breaches of the peace, and to bring about by peaceful means, and in conformity with the principles of justice and international law, adjustment or settlement of international disputes or situations which might lead to a breach of the peace;
2. To develop friendly relations among nations based on respect for the principle of equal rights and self-determination of peoples, and to take other appropriate measures to strengthen universal peace;
3. To achieve international co-operation in solving international problems of an economic, social, cultural, or humanitarian character, and in promoting and encouraging respect for human rights and for fundamental freedoms for all without distinction as to race, sex, language, or religion; and
4. To be a centre for harmonizing the actions of nations in the attainment of these common ends.

There is no doubt in my mind that the original crafting of the UN charter took a lot of careful efforts from its founding members to assure that the world organization would be equipped to function properly. As a result, we have seen many decisions made by the UN that definitely helped make the world a better place. One of these decisions was the 1947 vote for the partitioning of British Mandate Palestine, that led to May 14, 1948 and the re-birth of Israel as a modern nation (33 for, 10 against, 10 abstentions.)

But 1948 is nearly 70 years ago and since then, the United Nations have been less than friendly to Israel. As a matter of fact, for many years, there have been more resolutions passed against the Jewish state than the rest of the world combined (and here). For instance, in 2015, the UN adopted 23 resolutions, three against Iran, Syria and Korea and twenty against Israel. There are no indication that it will slow down in 2016. It is also very hard to forget the 16 years that it took the United Nations to revoke their 1975 resolution claiming that “Zionism is Racism.” And even if they did revoke it, the organizing of the Durban I (2001), II (2009) and III (2011) conferences against racism have shown that the target was once again almost exclusively Israel.

The United Nations’ obsession with demonizing Israel is obvious to any unbiased observer. Just days ago, the unbelievable claim was made by the UN that Israel was the number one country violating women’s human rights. The UN ignored Hamas, Sudan, Saudi Arabia, Iran, ISIS, Syria to name just a few of the countries were animals are treated better than women. Yet it found Israel guilty of human rights violation against Palestinian women. Is it me or whatever comes out of the UN is officially believed as fact by a world population that certainly doesn’t care to check for accuracy as much as it cares for stigmatizing and ostracizing Israel?

To add insult to injury, the UN decides to praise and promote violence, lies and murders. How do you explain the UN funded tree planting by Palestinians to honor the memory of terrorists? How sick is it to promote death and make murderers into martyrs while accusing the victims of human rights violation?

This makes it very difficult for anyone who is seeking truth and fairness to not accuse the UN of antisemitism. It is a fact that a large number of UN members are Arab/Muslim nations who are against Israel and are weighing in at every chance they have to vote against the only Middle East democracy. In the meantime, Israel treats Palestinians in their hospitals, gives jobs to Palestinians and even has two Arab parties as a part of the Knesset. This is looking more and more like there is nothing Israel can do to be in good standing with the world in general and the United Nations in particular.

Even if all Jews would die today and Israel as a whole would become Palestine, antisemitism would continue to exist in the hearts of men. You read me right, no Israel and no Jews do not guarantee no antisemitism, it only guarantees no Israel and no Jews, something that God will never allow (Jeremiah 31:35-37). But if the UN could continue trying to play god…well, that’s a different story! Those nations are united indeed, but they are united against Israel and as a result, against God (Psalm 83:5.)