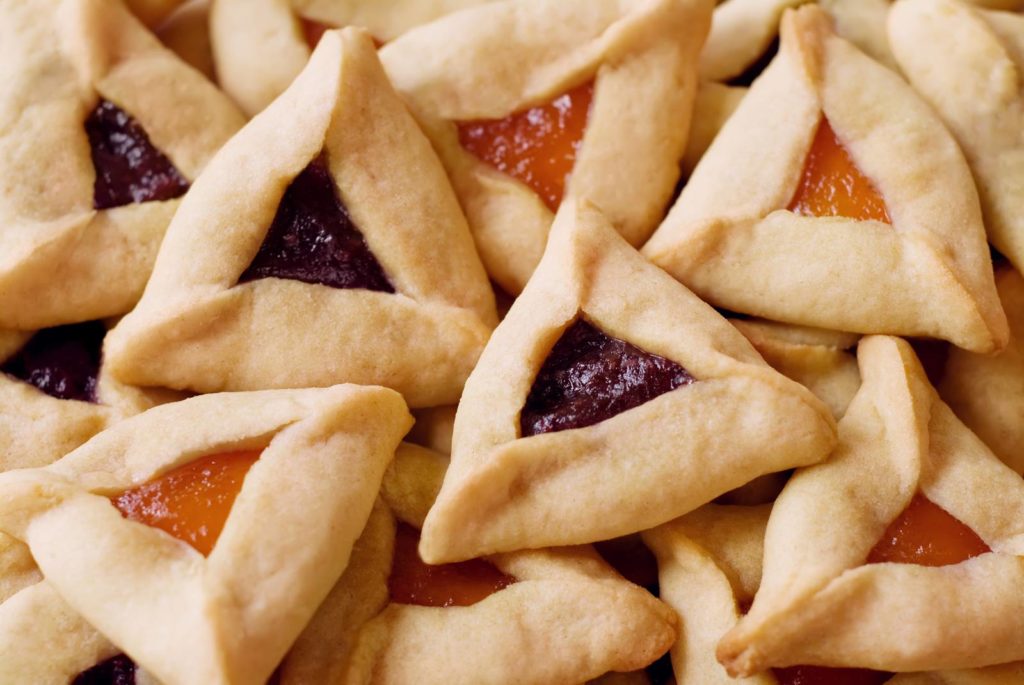 Wednesday, February 28, 2018, marks the celebration of the Jewish festival of Purim. Jewish people around the world gather to recall God’s protection in days of old. People eat special foods, dress up and read the Megillat Ester or scroll of Esther in the synagogue, where a lot of noise is made at the calling of the names of the three main protagonists: Mordechai, Esther and Haman. Gifts are often exchanged as well as donations made to charity.

• PURIM IN THE BIBLE: The first time we read about Purim, is at the end of the book of Esther–a book about God’s miraculous preservation of the Jewish people–even though this is the only book of the Bible where God is never mentioned by name. The story of Purim is also a very strong post-Genesis example of God’s promise to Abraham to bless those who bless him and curse him who curses Abraham (Genesis 12:3.) Haman, the archenemy of the Jews built gallows to hang Mordechai, and at the end, he and all of his sons were hanging on these very gallows…A curse for a curse!

Haman’s approach to the “Jewish problem” is worth looking at from the perspective of Satan, the ultimate enemy of the Jews. Early on (Genesis 3:15), Satan had come up with a master plan: Use people to destroy the Jews on a global scale; thus anti-Semitism was born
In Esther chapter 3, Haman puts his curse against the Jews in motion, and because of one Jew, namely Mordecai, Haman seeks to destroy all of them. We start seeing the irrational behaviors promoted by an anti-Semitic heart. Haman seeks to destroy ALL THE JEWS of the Persian Empire where many of them lived at the time.

In a sense, Haman tried to make anti-Semitism a government-sanctioned policy, something that will be picked up again much later in history by Nazi German. We read in Esther 3:1-2, 6-5: “After these events, King Ahasuerus promoted Haman, the son of Hammedatha the Agagite, and advanced him and established his authority over all the princes who were with him. And all the king’s servants who were at the king’s gate bowed down and paid homage to Haman; for so the king had commanded concerning him. But Mordecai neither bowed down nor paid homage. When Haman saw that Mordecai neither bowed down nor paid homage to him, Haman was filled with rage. But he disdained to lay hands on Mordecai alone, for they had told him who the people of Mordecai were; therefore Haman sought to destroy all the Jews, the people of Mordecai, who were throughout the whole kingdom of Ahasuerus.

Furthermore, he proceeds to give the reason why the Jews are not wanted in Ahasuerus’ kingdom, and that is simply because THEY ARE DIFFERENT. “Then Haman said to King Ahasuerus, “There is a certain people scattered and dispersed among the peoples in all the provinces of your kingdom; their laws are different from those of all other people, and they do not observe the king’s laws, so it is not in the king’s interest to let them remain. (Esther 3:8)

Haman realizes that his endeavor will require some logistical finesse, so he asks the king to issue a decree for the destruction of the Jewish people. “If it is pleasing to the king, let it be decreed that they be destroyed, and I will pay ten thousand talents of silver into the hands of those who carry on the king’s business,…And letters were sent by couriers to all the king’s provinces to destroy, to kill, and to annihilate all the Jews, both young and old, women and children, in one day, the thirteenth day of the twelfth month, which is the month Adar, and to seize their possessions as plunder. (Esther 3:9-13)

While the outcome was unfortunately different in both cases, the process by which Haman sought to annihilate the Jews and the one used by Hitler have many similarities.
• One Man’s jealousy led to uncontrolled hatred (3:5)
• Targeted hatred became global hatred (3:6, 13)
• Hatred was apparently caused because of non-conformity (3:8)
• Attempted annihilation of the Jews was structured and organized (3:9-13)
• Funds were spent and financial wealth was provided for the perpetrators (3:9, 4:7)

• PURIM in the 1940s:  Soon after coming to power, Hitler quickly banned the celebration of the Jewish festivals including Purim. In a speech delivered the day after Kristallnacht, in November 1938, Julius Streicher (1885-1946), Hitler’s “Director of the Central Committee for the Defense against Jewish Atrocity and Boycott Propaganda” declared that since the Jews killed 75,000 Persians in the days of Esther, the same fate could befall the German people and so the Jews had to be stopped. Again, the “curse-for-a-curse” biblical principle was applied to Streicher who eight years later was executed on the gallows at the end of the Nuremberg Trials. Streicher looked at the audience in the courtroom and yelled “Purim Fest 1946”, as his final claim that the Jews were out to get him. It would have required a certain knowledge of the Jewish lifestyle and festivals for Streicher to even make the parallel.

PURIM IN 2018: Satan knows that he cannot succeed but he tries without ceasing. He has indoctrinated much of the world against the Jewish people, creating anti-Semitism and making it the oldest and most enduring form of hatred against a people group. While he keeps sub-contracting his hatred to different groups of people, the danger remains the same and the Jewish people continue to be the “scapegoats of humanity”. The same approach used in biblical days and during Hitler’s reign is used today by historical revisionists,  BDS promoters, Christian Palestinianism proponents and all other enemies of Israel and the Jewish people. If they had their way, Israel would be erased from the map and the Jewish people completely eradicated from existence and from history. But in a very “Purimesque” ending, Israel will prevail and the Jewish people will continue to flourish.

Be it during biblical times, during the 1930s and 1940s or even today, through thick and thin, God has always had Israel in the palm of His hand. Even though He was absent by name in the book of Esther and it felt more like “the eclipse of God” during the Holocaust,  He never reneged on His promises. So today, we can celebrate Purim with confidence and with joy because the same God of Abraham, Isaac and Jacob has our back and keeps His word.