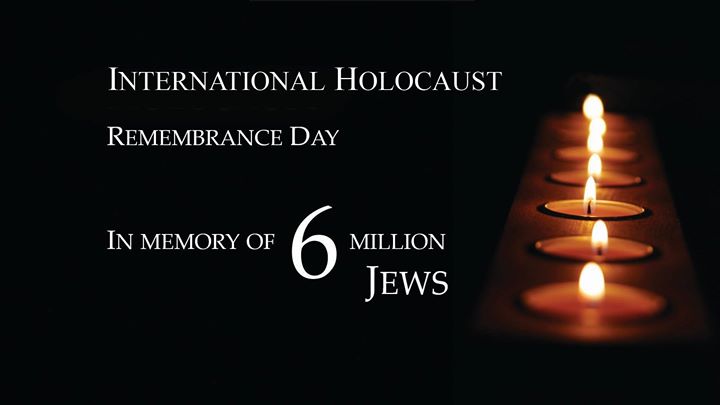 When someone cannot defend themselves, they count on others to come to the rescue, and when it comes to the Holocaust, the others are you and me. As it turns out, the silenced six million are counting on us never to be forgotten. International Holocaust Remembrance Day It is different from Yom HaShoah (Day of the Catastrophe), which falls annually, a week after Passover in Israel (started in 1953). Since 2005, each year, on January 27, the international community remembers the Holocaust in various ways, from synagogue services to vigils to educational events that include Holocaust survivors or scholars. Yet, survivors are dwindling to a few thousand globally. Considering that anybody born at the onset of the war in 1939 would be eighty-four years old today, most survivors of the Holocaust are in their nineties. Soon, they will all be in our memories. Or will they?

Some clueless teenagers were recently spotted on TikTok pretending to be in the Holocaust. These teenagers put makeup on their faces to look emaciated and write pretend captions such as”I died in the Holocaust” and receive comments such as “I myself have been gassed over 6,000,000 times!!!” These young people are belittling the worst carnage against the Jewish people in the history of mankind; they think it is funny and their followers do too. That is not even considering all the other social networks getting away with posts about the Holocaust, going from ridiculing it to denying it.

The danger is threefold. First, we have a disappearing group of first-hand witnesses of the horrors of the Holocaust. In another five years, they might all be gone since the survivors are almost all in their nineties. Second, an uneducated and offensive younger generation is mocking the Holocaust and its victims online or in person. Finally, we have a growing number of people who minimize, alter or deny the catastrophe. As the survivors disappear and the new generation mocks the tragedy, it will only encourage those who choose to deny the Holocaust ever happened, and this breaks my heart.

As the international community commemorates the Holocaust on January 27, I am glad to see that some efforts are still being made, never to forget. Yad Vashem Holocaust Memorial in Jerusalem is inaugurating its book of names at an exhibit at the UN headquarters in NY. The Book of Names contains 4,800,000 of the 6,00o,000 names of the Holocaust victims. One of them is my grandfather Maurice Weinzveig. What else can we do?

Listen to a Holocaust survivor: This is a very effective way to learn about the event from a first-hand witness. The challenge is that in 2023, their number is exponentially reducing by virtue of their age. If you know one or are invited to hear one, I think you should take advantage of the opportunity. Additionally,  the staff at Shadows of Shoah brings many testimonies from survivors on video and, by that medium, renders their unique stories eternal. The Steven Spielberg Shoah Foundation also has over 50,000 video testimonies of survivors, including my dad Georges Melnick.

Visit a Death Camp: In November of 2010, I traveled to Krakow, Poland, to visit the remains of Auschwitz-Birkenau, where my maternal Grandfather Maurice Weinzveig was taken by the Gestapo from Paris in the Summer of 1942. I am set to visit again in the summer of 2023. The Death Camps are some eerie monuments left over from one of the darkest periods of mankind’s history. If possible, everybody, and most definitely every Christian, should walk through one of them once in their lifetime.

Visit a Holocaust Memorial Museum: The most extensive and most elaborate of them–Yad Vashem–is located in Jerusalem. I make a point of taking the people there each time I lead a tour to Israel. It is a must! It is a difficult visit punctuated by visual and audio markers that will undoubtedly leave an impression on you for many years. There are other Holocaust Memorials, several in the United States. The United States Holocaust Memorial Museum in Washington D.C. and the Simon Wiesenthal Center/Museum of Tolerance in Los Angeles are just two of them. The list is much longer and warrants several different visits if possible.

Read an account of the Holocaust: There is a tremendous collection of Holocaust literature in many languages. From survivors’ accounts to biographies, historical accounts, and even poems. Every human being should read the short but life-altering account of Elie Wiesel’s time at Auschwitz-Birkenau with his father when he was only 15. As told in his autobiography Night, his story of resilience and survival against all odds is very dark. A detailed and accurate account of the Holocaust can be found in Lucy Dawidowicz The War Against the Jews or in The destruction of the European Jews by Raul Hilberg.

The silent six million are indeed crying out. It is heart-wrenching even to think their memory could disappear from history. To bring a little perspective to the 6,000.000 and to understand that they are much more than just a number–even though the tattooed forearm was an attempt at dehumanizing the victims–if we were to recite all the names of the 6,000,000 innocent victims of the Holocaust, it would take us 11.5 years nonstop day and night.

Please, tell your loved ones, especially the younger generation about the Holocaust. Don’t wait for schools or museums to do our jobs. We owe it to the silenced six million, so let us not be indifferent!