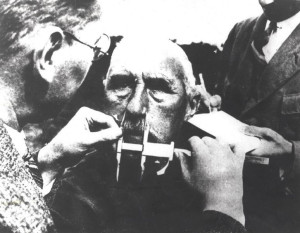 The dehumanization of the Jewish people came to its apex during World War Two and the Holocaust. The German phenomenon did not take place overnight, but rather was the result of an incremental, yet constant persecution of the European Jewish community over the centuries.

Hitler and the Nazi Party gained power in 1933 and within two years started to implement policies that would lead to the “Final Solution to the Jewish Question”, the infamous euphemism for the killing of six million Jews during the Holocaust.

The most notorious of these sets of laws was known as the “Nuremberg Race Laws” or more commonly “The Nuremberg Laws” (not to be confused with the post-war “Nuremberg Trials” of the Nazi murderers).

The Nuremberg Laws of 1935 were divided into two categories. One was The Law for the Protection of German Blood and German Honour and the other was The Reich Citizenship Law. Both were based on the false science of Eugenics or racial purity. In their entirety, the The Nuremberg Laws were aimed at ostracizing the Jews from German society to the point of making work, life and socializing virtually impossible. They represented the foundation for the Nazi definition of who is a Jew, who is Aryan and as a result who deserved to live and who deserved to die.

Marriage between Jews and non-Jews became forbidden. Jewish owned stores were taken over. Jews wanting to leave Germany were taxed up to 90% of their estates. Jews were required to carry identity cards with the letter “J” stamped on, a well as being forced to insert the middle name of “Israel” for males and “Sara” for females on their papers. Jewish doctors could no longer treat non-Jewish patients.
A complicated bureaucracy of anti-Semitic statutes was enacted, transforming the Jews from humans to animals to parasites, and thus requiring their “extermination” for the betterment of the world, or of the Third Reich at the very least.

The Nuremberg Laws were incremental but key to the systematic attempt at the destruction of European Jewry.

Is it possible that only eighty years later, we are starting to see what could be called “a new set global Nuremberg Laws?” Just like most of the German populace didn’t notice or even react to the racial purity laws, today’s global community seems unaware or worse; uninterested about this new phenomenon.
The fact that the global Jewish community suffers from anti-Semitism can no longer be denied. But it is no longer only racial purity that is being promoted. Much is being attempted to reduce the Jews to a nuisance to society. This compilation of anti-Jewish acts, decrees, exhibits, marches and even UN resolutions is seeing an exponential growth without much resistance from anybody at all.

Recently, the Brazilian government has passed a law that all Brazilian Jews born in Jerusalem will no longer have the word “Israel” on their passport. While the number of affected people is minimal in Brazil, the politically correct statement is clear: Jerusalem can no longer simply remain the Jewish Capital! Unbeknownst to most, this is also the standard procedure for the United States, Canada and France. It has of course become highly offensive and reeking with intolerance to many who are so “invested” in the Israeli-Arab conflict!

Just a couple of weeks ago, on some Air France in-flight maps of the middle East, Israel, Jerusalem and Tel Aviv were omitted and replaced with the words “Gaza” and “West Bank”. It took no time for passengers to notice and start flooding the social networks with photos of the erroneous maps. Within days, Air France issued an apology and fixed what they called a “technical problem.” I am at a loss trying to understand how this could possibly be a technical glitch. Words disappeared and were replaced by other words that are usually not on the map at any scale. Was it technical or political? Don’t get me started?

In Spain, just a few days ago, the Jewish reggae singer Matisyahu was asked to recognize the Palestinian State to be allowed to participate in a music festival. After the artist categorically refused to flex under the political pressure, his show was cancelled by the festival.

These might appear as very little waves in an ocean of anti-Israel sentiment often hit by more devastating anti-Semitic tsunamis. They nevertheless are becoming more and more common and they are a sign of the times for the global Jew. They are little stabs in the Jewish identity that often go unnoticed but set-up the stage for more and more acceptance of the propaganda coming from the BDS (Boycott, Divestment and Sanction) movement.

It is obvious that these are not laws against the Jews like we saw in the mid-thirties out of Germany. But in many ways, these attempts at demonizing the Jews and Israel can even be as lethal as simple laws. They come from many organizations, agencies and even common people who have naively (or some even willingly) bought into  the Palestinian narrative.

There is nonetheless a greater danger looming on the Jewish horizon. As we see more and more of the world being conditioned against the Jews and the State of Israel, it is only logical to expect very little resistance when real laws are enacted against them [the Jews].

A new set of Nuremberg Laws might not be a reality yet, but I have no doubt that the tentacles of a global anti-Jewish legislation are coming. When these laws become a reality to the Jews, will they be enough of a reality to you to say/do something?

In 1942, French Pastor André Trocmé answered a Vichy official about hiding and saving Jews in his village of Le Chambon-sur-Lignon and said:“These people came here for help and for shelter. I am their shepherd. A shepherd does not forsake his flock… I do not know what a Jew is. I know only human beings.”

Will there be any “André Trocmé” left around when my people are hunted down again?