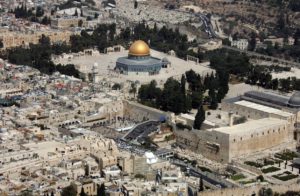 I lost my respect for the Nobel Prize Academy when in 1994, they awarded a joint Nobel Peace Prize to Yassir Arafat along with Shimon Peres and Yitzhak Rabin. Such political correctness blinding the committee to the point of painting Arafat as a peace hero in the Middle East was nauseating. Man’s propensity for trusting established humanitarian organizations is often based on a name and /or reputation, but as well intentioned as it might be, it shouldn’t be done blindly. The same principle applies to many United nations agency in general and UNESCO (United Nations Educational Scientific and Cultural Organization) in particular.

Starting with their motto “Building Peace in the Minds of Men and Women”, we realize that their concept of peace might be different from what we are used to. What they mean by peace is more like social justice, that of course is all relative, especially as it pertains to the Middle East. The hypocrisy is unbearable! I am not saying that UNESCO has never accomplished anything worth its motto, of course not! Yet, along with a lot of other organizations, when it comes to Israel, UNESCO is plagued with the virus of double-standards.

On Thursday, October 13 in Paris at its executive Board Meeting, UNESCO passed a preliminary measure with 24 votes for, 6 against and 26 abstentions including the United States, the United Kingdom and Germany amongst others. The measure is a repeat of another one that was adopted in April 2016, and will be put to a final vote in late-October 2016.

The Palestinian authority continues to propose “Palestinian” sites for inclusion on UNESCO world heritage “in danger” list like the village of Battir in the Judean hills. But this is akin to listing Atlantis–with a hard to prove historicity–as a historical site to be preserved. This is exactly what they are attempting to do with the mosque located atop the Temple Mount. They are trying to give historical credence to a site that–while hosting a genuine Muslim mosque– doesn’t have any Muslim historical significance. One must be reminded that the Qur’an doesn’t even mention Jerusalem by name, but UNESCO isn’t going to be bothered by these kind of details!

Yet that is not enough. They also aim at delegitimizing Israel of any historical connection to the land. It would be one thing to claim that Christianity, Islam and Judaism all have a claim to the land one way or another. But what UNESCO is agreeing to do now, is to eradicate all Jewish history. In fact, they are not even mentioning the Temple Mount and the Western Wall by any Jewish reference but instead is calling it by its Muslim name “Al-Aqsa Mosque” and “Haram al-Sharif”, emphasizing its Islamic significance.

The Jewish Temple was there thousands of years before the mosque which was built hundreds of years after the Temple was destroyed by the Romans in 70 CE. The Temple’s existence can be proven geographically, historically, archeologically and biblically. There is without a doubt–at least for any serious historian– a Jewish connection to Jerusalem.

So the question remains as to why UNESCO is pushing for the islamization of a recognized Jewish site? The resolution passed in April 2016 calls Israel the “Occupying Power”, accuses Israel of the storming of “Al-Aqsa Mosque” but never mentions the throwing of rocks from the Temple Mount onto Jewish worshippers at the Western Wall. Also in that resolution is an attempt at making the tomb of the Patriarchs which is located in Hebron, a solely Palestinian site.

UNESCO has a long history of site preservation under the World Heritage program. They have done a lot of good to preserve and teach history to the world and as such have established a reputation that currently allows them to move against Israel without being questioned or challenged, except maybe by a few organizations such as ADL or the Simon Wiesenthal Center . This move has nothing to do with preserving history since it isn’t based on verifiable history. As always in most antisemitic attempts, the move is seldom to promote or protect the Palestinian people but more to demonize and delegitimize Israel.

Considering that the April draft was submitted by Algeria, Egypt, Lebanon, Morocco, Oman, Qatar, and Sudan, one shouldn’t be surprised at the anti Jewish sentiment. This recent move by the Palestinian Authority (PA) to have UNESCO completely de-Judaize the Temple Mount and Western Wall would have never take root even twenty years ago, but the PA’s patience, endurance and boldness are starting to pay off.

Israel and the Jewish people do not have much of a voice at the United Nations and/or UNESCO, no matter how rooted in history they are. On the other hand, Palestine continues to move forward on the road to world recognition which puts them closer to their only goal; the complete destruction of Israel. UNESCO is well on its way to become a co-perpetrator alongside the Palestinians. Seriously, if the Jewish people have no historical right to the land and they have nowhere else to go, what prevents the enemies of Israel from finishing the job that Hitler started?