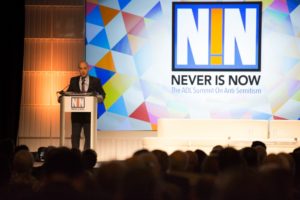 Since its creation in 1913, the Anti-Defamation League has been fighting racism and bigotry in general and anti-Semitism in particular. They claim that they exist to “fight anti-Semitism and all forms of bigotry, defends democratic ideals and protects civil rights for all.” For over 100 years, they have been very vocal and active in fighting for Jews across the globe, but times are changing fast as ADL’s current CEO, Jonathan Greenblatt said in his opening remarks on November 17, 2016:
” Now, it may come as a surprise but, in our 100 year history, ADL had never before convened a summit like this on anti-Semitism. This is a first. In our early days, I suppose, it was because everyday anti-Semitism was a given; it’s why ADL was founded….And yet, today, I think all of us fear that something has changed. There are troubling signs. Now they may be subtle, they may go unnoticed by the vast majority of Americans, but we see them. We know…the American Jewish community has not seen this level of anti-Semitism in mainstream political and public discourse since the 1930s.”

I attended that one-day summit. In the midst of over a thousand people (most of them Jewish), I felt a sense of community, but also an overarching sense of concern and even fear the future. Throughout the day, most of the speakers felt compelled to give various brief commentaries on the recent results of the presidential elections, adding their respective sense of anxiety to the general surprise and even shock of the outcome. For the most part, the Jewish community felt that the Trump victory represents an undeniable shift towards what has been called the Alt-Right by many, not to call it extreme right. It is not my intention to ad my commentary to the election results, suffice it to say that the theme of the Summit compelled many to comment on the current temperature in America, including the political AND racial divides.  I believe that regardless of the election outcome, anti-Semitism is on the rise and will continue to affect our Jewish communities globally. I also believe that the consequences of this recent rise in anti-Semitism will probably be handled differently from each end of the political spectrum…but time will tell! In the meantime, this is what I brought back from such a powerful summit:

• American Jews are worried about their future.
The elections brought out a vast amount of anti-Jewish sentiment expressed in the media with probably the most of it coming from social media. Again, using Mr. Greenblatt’s words “The sum total of all these signs? People are afraid. They worry about their children. Many are asking themselves — are we safe?”  Many of these online threats can become real, physical threats in our own Jewish communities. An increase of swastikas have been found, painted on dorm rooms, Jewish property has been vandalized and cemeteries continue to be desecrated. Like one speakers said “if it happens on Twitter, it could very well transfer into real life events.”

• Criticism of Israel is different from demonization.
Nobody fights the idea that Israel can be criticized for certain decisions that its government makes or has made. This criticism can be very healthy and constructive. I couldn’t agree more. But criticism is very different from demonization. The first will isolate issues that are dangerous or negative and need to be addressed, while the second will paint with broad strokes and demonize Israel and the Jewish people indiscriminately. The summit brought the danger of demonization to the forefront of all the issues. Natan Sharansky reminded us of the real danger facing us today as he spoke of the three Ds against Israel he so eloquently defined years ago: Deligitimization, double-standards and demonization.

• Our greatest threat might come from American Universities.
US campuses are where the next generation of American leaders are being molded and mentored. Regardless of your political inclination, it is an accepted fact that most US campuses are very liberal. The Jewish community has a long history of liberalism in America. The Jewish involvement in the Civil Rights movement of yesteryear has morphed into a modern involvement in global social justice. Yet, the radical Left BDS (Boycott, Divestment and Sanction) movement is spreading like wildfire on American campuses. This is a battleground that cannot be ignored, but to the dismay of most of the speakers, Jewish students on various campuses are too often poorly equipped at best and uninformed at worst, to fight BDS.

• Jewish power has nothing to do with Jewish hatred.
In a discussion on Jewish power and powerlessness, Former Knesset member Dr. Einat Wilf proposed that anti-Semitism had nothing to do with Jewish power. Even though the ADL has increasingly empowered the Jewish people over the last 100 years– and we are not talking about the false accusation of a global Jewish takeover– Jewish power isn’t necessarily a cause for anti-Semitism. Dr. Wilf reminded us that throughout history, Jews were singled out and persecuted for being either too rich or too poor, capitalists or communists and even for being too different or too much like the people they lived with. So I would agree with Dr. Wilf that anti-Semitism isn’t related to any rational assessment of Jewish life and actions, and as such, it is obviously unjustified.

• The time to act is NOW!
While the focus of the summit was on how to fight anti-Semitism, other minorities were represented throughout the day. The reason is rather obvious; those who oppose and harass Jewish people will seldom stop there. Bigotry is always an equal opportunity hater. Those who are anti-Semitic often extend their hatred further.  Blacks, gays and or Christians to name just a few, are all at risk. But the focus was on anti-Semitism because it has indeed been the longest hatred, is highly irrational AND is on the rise globally in an unprecedented way.

The ADL will probably have more summits of the sort in the future because such a fight will not be won overnight. Something that wasn’t approached at the summit was the potential for any spiritual connection to anti-Semitism. I think that it was unfortunate because I am convinced that Satan is at the root of anti-Semitism. As a matter of fact, I call the last developments in global anti-Semitism, “End-Times anti-Semitism” because I clearly see an irrational convergence of Classical and New anti-Semitism coming after our communities that very possibly is Satan’s last attempt at annihilating the Jews. I applaud the ADL for its efforts and I encourage all of you who read me to be more vocal and more involved because NEVER is NOW and to quote Mr. Greenblatt one last time: “We need to educate where we can, oppose where we must, and lock arms with those who embrace our mission.”