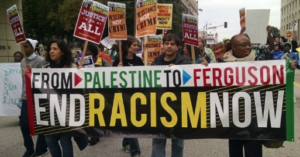 A few weeks ago, I felt it necessary to expose some of the BLM agenda, and to also make it clear that the George Floyd murder was a tragedy. All along, I have supported equality and fought xenophobia. My commitment to fighting antisemitism has now entered its third decade. Being a French Jew who immigrated to America, I understand minorities and I understand racism. So, when the Black Lives Matter (BLM) started to come to the forefront of the News and picked up momentum, I originally agreed with the concept, even though as a strong believer in the message of the Bible, I am more than convinced that all lives matter. Unfortunately–as true as it might be– responding to the BLM people with an “All Lives Matter” answer, can sees simplistic and even offensive at times.

Let’s get passed the “Black Lives” versus “All Lives” debate for a mom and take a look at some of the connections that the BLM proponents have with other organizations. You might be surprised by what we discover. As I always explain, I am not interested in character assassination, but I simply want to expose the very words that BLM people are saying as well as the organizations they support and line-up with. After that, you will have to make your own decision as to the validity of the BLM movement in the current crisis. I will try to expose and connect the dots, and you will decide if it is only about bringing the overdue equality and justice to the black community. Time to connects some dots!

BLM is part of the larger M4BL: BLM is one of more than 150 organizations within the coalition known as Movement for Black Lives (M4BL.) M4BL was formed in 2014 to organize black communities in response to violence and inequality against them.

M4BL is antisemitic to the core: On their website, under invest/divest, they publish an article in their resources titled Cut Military Expenditures Brief that clearly tells it like it is. They promote cutting US military expenditures and reallocating the funds elsewhere. Interestingly enough, their second point reads: 3 billion dollars in US aid is allocated to Israel, a state that practices systematic discrimination and has maintained a military occupation of Palestine for decades.
Further in the document, they state: “The US justifies and advances the global war on terror via its alliance with Israel and is complicit in the genocide taking place against the Palestinian people. The US requires Israel to use 75 percent of all the military aid it receives to buy US-made arms….The results of this policy are twofold: it not only diverts much needed funding from domestic education and social programs, but it makes US citizens complicit in the abuses committed by the Israeli government. Israel is an apartheid state with over 50 laws on the books that sanction discrimination against the Palestinian people. Palestinian homes and land are routinely bulldozed to make way for illegal Israeli settlements. Israeli soldiers also regularly arrest and detain Palestinians as young as 4 years old without due process. Everyday, Palestinians are forced to walk through military checkpoints along the US-funded apartheid wall.”
What we see here, is an adherence to the pro-Palestinian narrative of “ethnic cleansing” when they write about “the genocide taking place against the Palestinian people.” Are any of these people aware that there are more Arabs inside Israel today than there were in 1948, when Israel was re-born as a modern nation. Incidentally, there are still less Jews in the world today than there were before the Holocaust (16,728.000 in 1939 and 14,700.000 in 2019.)

M4BL openly promotes BDS and Palestinianism: On the same document, titled “A Vision for Black Lives”, they offer some resources such as www.BDSmovement.net that makes you wonder what the connection is between BLM, M4BL and the Palestinian/BDS cause. They also offer another site linking the suffering of blacks at the hands of American police to that of Palestinians at the hand of Israeli soldiers at www.blackpalestiniansolidarity.com where you can read “In the course of resilience against the merciless edge of state-violence, protesters in Ferguson held up signs declaring solidarity with the people of Palestine. In turn, Palestinians posted pictures on social media with instructions of how to treat the inhalation of tear gas. …Since the devastating attacks on Gaza and in Ferguson, the assault on Black and Palestinian bodies has continued unabated. …We are making connections between the systems of violence and criminalization that makes Black and Palestinian bodies so easily expendable.

BLM participates in Pro-Palestinian rallies: On July 1, 2020 a BLM demonstration took place in Brooklyn, NY where both slogans “Death to America” and “Death to Israel” were chanted. BLM proponents openly make connections between the “Palestinian struggle” and the “Black struggle”, clearly comparing apples to oranges. There is a desire for a strong intersectionality between the two groups, at the expense of the Jewish people and Israel.

BLM people accuse Police of being trained by IDF and using their anti-Palestinian methods on black people: After the tragic death of George Floyd murdered by a corrupt police officer, accusations started to come against the Police for brutality. It wasn’t long before the link was made between American police officers and IDF soldiers, claiming that the American Police had been trained by the Israeli Defense Forces on how to forcefully and brutally restrain people. There is no truth to that statement, it is pure libel.

BLM fights against anti-BDS laws: Up to 32 states have passed anti-BDS laws in the USA. They boldly denounce the hypocrisy and antisemitic agenda of the BDS movement and passed various laws to stop people from supporting the boycott and divestments against Israel.

Some BLM leaders are clearly showing their true colors: While the BLM movement claims to exist for the purpose of fighting racism, they don’t hesitate to partner with people whose definition of racism must not include antisemitism. A good example is Melina Abdulah who is a supporter of antisemitic nation of Islam leader Louis Farrakhan. She has appeared at several of their rallies. She even went as far as defending his antisemitic actions. Ms. Abdulah was leading the BLM Los Angeles chapter when a few weeks ago the Fairfax Jewish community experienced what could only be described as a modern day pogrom.

BLM has a genocidal ideology: Some BLM proponents have recently voiced their support for “Free Palestine and the eradication of Israel, which pretty much means a Jewish genocide.

I could go on and connect more dots, but you get the ideas. What I get from all this, is that black lives seem to matter ONLY at the expense of other lives. It is not about true equality; it is about superiority! Frankly, I would not be surprised if the whole Jewish community would distance itself from the BLM movement, but it is not the case. I cannot for the life of me understand why the BLM movement gets the support of the National Council of Jewish Women. On their webpage, they express their support in words like, “For now, it is important to support Black and Brown communities and the leaders spearheading the peaceful, anti-racist responses unfolding.” There is nothing peaceful or anti-racist about much of the BLM actions.

None of us can truthfully claim that we are color blind when it comes to race, more should we. I have African, Asian, Hispanic and Middle Eastern friends. Sure, I see the color of their skin as they see the color of mine, but the color of one’s skin should always be trumped by the condition of one’s heart. It is only when we humans look at the heart that we can see who someone really is and what fruit they produce in society. When I look at the fruit produced by the BLM movement, I see mostly hatred, violence, racism, antisemitism and abuse.

The sad thing is that many people have no idea about the root of bitterness and anger that is feeding the BLM movement, so they support it blindly, convinced that they are doing it for a good cause. If the cause is equality for the black community, it is a great cause and I am so sad that it would even be a fight we need to fight in 2020. Unfortunately, I don’t see the BLM movement doing that. It divides, it hurst and it denigrates. Before you give BLM your support, please connect the dots!