You are here: Home / Archives for John Bolton 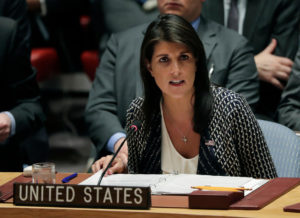 Recently, the United States decided to leave the UNHRC (United Nations Human Rights Council.) United Nation US Ambassador Nikki Haley shared the reason in a statement where she said: “For too long, the Human Right Council has bee a protector of human rights abusers and a cesspool of political bias.” Many have seen the move as a retreat, but Miss Haley clearly stated that the move was anything but a retreat. It was because the United State would no longer be part of a hypocritical UN organization that allows for a myriad of human rights violations, elects human rights violators to the UNHRC and has a chronic bias against Israel.

The UNHRC was created by the UN General Assembly in early 2006 through UN Resolution 60/251. It comprises 47 seats from five different regional groups. Commendable aspirations were laid out in the text of the resolution: “Emphasizing the responsibilities of all States, in conformity with the Charter, to respect human rights and fundamental freedoms for all, without distinction of any kind as to race, colour, sex, language or religion, political or other opinion, national or social origin, property, birth or other status.” In reality, the UNHRC was a hypocritical body bent on finding fault with Israel at any chance they had. The UNHRC has proven over and over again that actions speak louder than words.

In its first year of business, the Council only found fault with Israel and did not condemn one other of the 193 countries of the world. According to UNWatch.org, Israel is the only country that is on the council’s permanent agenda, almost as if the UNHRC was created with the sole purpose of demonizing Israel. The council has found fault with Israel repeatedly while blindly exonerating Hamas and Hezbollah. It could be argued that not only are they anti-Israel but that they possibly support terrorism.

In leaving the UNHRC, the United States made a bold move signifying that the days of letting Israel being accused of human rights violation while looking the other way when obvious violators act with impunity are over. Some politicians including John Kerry had spoken against the bias on occasions, but these apparently were just words. Over 50% of the governments sitting on the council are considered repeat offenders when it comes to human rights violations. Like China, Cuba, Saudi Arabia, to name just a few, they are either totalitarian regimes or “non-democracies.”

Actions speaking louder than words actually works both ways. The United States took a stand a few weeks ago when it decided to leave the UNHRC. Some called it a cowardly move or a move that would be detrimental to human rights, I beg to differ! Miss Haley, representing the United States was led by integrity and ethics in a genuine effort to unmask the hypocrisy, especially when it comes to Israel, the only democracy of the Middle East. But while walking out sends a message, defunding will go much deeper.

In another blow to the UN, US National Security Adviser, John Bolton just announced the United States decision to defund the UNHRC. According to John Bolton, the US pays 22% of the UN budget and it would calculate how that relates to the funds given to the UNHRC and defund them. Hopefully, the world will start taking notice of the anti-Israel bias from the UN and the UNHRC and speak up.

The current administration has been one of the strongest friends of Israel in decades. With the recent decision to move the US Embassy from Tel Aviv to Jerusalem, President Trump received praises but also a lot of criticism. Undoubtedly, the UNHRC walk-out and defunding will generate a lot of criticism, especially from those who loathe Israel. It was the ethical thing to do and time will show it. It is time for the hypocrisy to end!