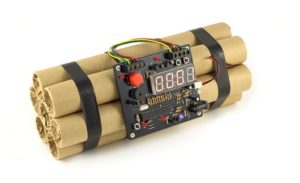 There has been over 150 bomb threats either emailed or phoned in to Jewish Community Centers (JCC) in the USA and other parts of the world since the beginning of 2017. Along with several Jewish cemetery desecrations and antisemitic graffiti, an eerie atmosphere of surging antisemitism has been noticed, even in mainstream media. I say “even” in mainstream media because the normal coverage of antisemitic hate crimes is usually very sparse or non-existent. “Black lives matter” and “Islamophobia” get quite a bit of coverage, but antisemitism usually not so much.

Nobody could ignore the multiple bomb threats to JCCs around the United Sates and other countries. But what came as a surprise was the identity of the perpetrator of the vast majority of these hoax bomb threats. It is believed that he might have made close to 1,000 similar threats in the last few years. That is quite an act of bold, relentless antisemitism, but……wait for it…….the perpetrator is Jewish and holds a dual USA/Israeli nationality. So the question is “was it antisemitism after all?” and the answer is “probably not.”

Michael Kaydar, the young man arrested on March 23 in Israel and suspected of making the calls has been diagnosed with a medical condition. He has had a brain tumor since the age of fourteen and was recently exempt from IDF service for health reasons. It is unclear what kind of sentence will Kaydar receive, if any. Yet, the arrest that just took place was significant for several reasons.

• The Bomb threats were not a by-product of Trump’s New America:
As much as many people wanted to blame the bomb threats to the “Alt-Right” atmosphere of Donald Trump’s America, it is now clear that there is no connection. Yet people were quick to blame our new President creating a tense atmosphere of racism. While it is always possible that extreme Right and/or extreme Left would participate in similar antisemitic acts, it wasn’t the case for this recent wave of threats. Donald Trump waited before speaking on the subject or reacting wrongly, and that was very wise.

• The perpetrator might not be a self-hating Jew:
Michael Kaydar was arrested for the threats. He is Jewish and holds a dual Israeli/American citizenship, but it is probably fair to say that he is a perpetrator that happens to be Jewish and not a self-hating Jew who wants to harm his own people. Kaydar is mentally unstable. His father was also arrested because he apparently knew of his son’s behavior in regards to the threats. Frankly, I would be more worried about the father than his son.

• The threats could be considered as acts of terrorism:
While Michael Kaydar might never be charged because of his condition, his actions were highly disruptive and as such could easily be considered as acts of terror. Many Jewish Community Centers (some of them multiple times) had to evacuate their facilities at a moment’s notice, risking the safety of their members, wasting a lot of energy, time and resources.

• Jew haters will find a way to use the events against the Jewish community:
It won’t be long before some real antisemites find a way to spin this series of threats to their advantage. Years ago, some accused the Jewish people of being behind the “inflated” statistics of the Holocaust simply as propaganda to force the establishment of the modern State of Israel. The same devious, unfounded methods could be used to accuse the global Jewish community of being behind the hoax threats simply to self-victimize, get attention to themselves and play the antisemitism card.

Jewish communities worldwide continue to suffer from acts of antisemitism. None of the bomb threats were real and that is good! But what about the multiple cases of graffiti and the several Jewish cemeteries that were recently desecrated? It would be a mistake to think for a second that because the bomb threats perpetrator was an irresponsible young man, Jewish people can rest. Antisemitism’s shadow is always looming around the corner of Jewish daily life.  But I believe that the current administration will do more to fight it that the previous one did. Vice-President Pence’s visit to Missouri proved it! We Jews could certainly use the support at this time.