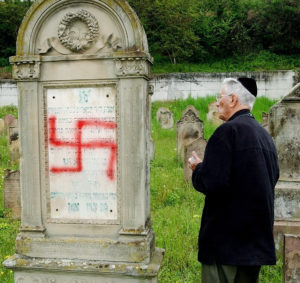 When attempting to tackle the age old problem of antisemitism, the very first thing to do is to understand the meaning of the word. The one aspect of the word that is understood across the board, is that even though the word contains “Semitism”, it only refers to the Jewish people. Semites include both Jews and Arabs, yet antisemitism has never applied to Arabs.

While the actions that can be labeled as antisemitic go back thousands of years and are documented in the Jewish Bible as early as the book of Exodus, the word itself is much younger. Many theologians, philosophers, pseudo-scholars and historians published numerous works against the Jewish people throughout history, but it is not until the late nineteenth century that the word anti-Semitism was coined. The first usage of such a word was by German journalist Wilhelm Marr who in 1873 published a pamphlet titled: “The Victory of the Jewish Spirit over the Germanic Spirit. Observed from a non-religious perspective.” In the pamphlet, he used the words Semitismus and Judentum interchangeably to describe Jewry and/or Jewishness. The usage of the word Semitismus led to the coining of the word Anti-Semitismus used in another pamphlet titled The Way to Victory of the Germanic Spirit over the Jewish Spirit”, in which Marr clearly sated his feelings about the Jewish people. In 1881, to remove all doubts, Marr founded the first German organization dedicated to fighting the “Jewish threat” to Germany, thus The League of Anti-Semites was born. The usage of the word continued to spread and was widely accepted by 1885.

Since that time, many reputable scholars have documented antisemitism through the ages, and have introduced their own definitions of the word, some better than others. Organizations helping to define and fight antisemitism, could be divided into Jewish and non-Jewish. Jewish organizations such as the Anti-Defamation League (ADL), Yad Vashem World Holocaust Remembrance Center, the United States Holocaust Memorial Museum are often more in tune with Jewish history, customs and/or the scarred jewish psyche of the post-holocaust era.

This is not to say that non-Jewish organizatons and/or scholars are insensitive or unaware of the trauma of antisemitism, but simply that there is a Jewish component to it making it much more personal to the global Jewish community than the rest of the world. A perfect example would be the 2008 US State Department definition: “Anti-Semitism is a certain perception of Jews, which may be expressed as hatred toward Jews. Rhetorical and physical manifestations of anti-Semitism are directed toward Jewish or non-Jewish individuals and/or their property, toward Jewish community institutions and religious facilities.” It is not from a Jewish institution and as a result, lacks some clarity and factual boldness. Yet there are scholarly works done by non-Jews that excel at defining antisemitism. Edward Flannery “the Anguish of the Jews”  or “Toward a Definition of Antisemitism” by Gavin Langmuir are two of several that I would recommend. So , definition vary in clarity and weight.

I am saddened and concerned about this nebulous description of “the longest hatred.” While the second part of the definition is helpful in qualifying that antisemitism can be both in words and deeds, the first part of the sentence uses words that are watering down the whole definition. Words like “a certain” or “perception” or “may be expressed” are a very weak way to describe the on-going irrational hatred against the Jews. I find it hard to believe, but it is almost as if these words were selected with political correctness in mind. It is interesting to note that the Alliance also based its working definition on a document known as the “Declaration of the Stockholm International Forum on the Holocaust.” While that document is a great work aimed at describing and denouncing the Holocaust, it must be understood that antisemitism precedes the Holocaust by more than twenty centuries and continues beyond the 1940’s with a revived and repackaged version of contempt against the Jewish people. So defining antisemitism using mainly a foundation of Holocaust is too narrow.

The Simon Wiesenthal Center reported the adoption of the [not so]new definition and praised it. In their mind, it “will force European countries to confront the growing crisis head-on.” I think that the definition would be clearer and much more powerful if it didn’t try to package antisemitism and Holocaust denial under the same umbrella. Holocaust denial exist because of antisemitism and must be fought as such, but it does not exist alongside antisemitism.

A simpler definition of antisemitism would work even better. It deserves to be more succinct, direct, and bolder in terminology. I propose this one “Anti-Semitism is the irrational hatred of the Jewish people characterized by destructive thoughts, words and/or actions against them ”. Under such a definition, we can include Holocaust denial, BDS, Christian Palestinianism, Replacement Theology and many other erroneous claims demonizing the Jews and/or Israel.

When it came to define antisemitism, the International Holocaust Remembrance Alliance was faced with the challenge of getting 31 countries to adopt the same working definition, and I am certain that it wasn’t an easy task. By their own definition, they are “an intergovernmental body whose purpose is to place political and social leaders’ support behind the need for Holocaust education, remembrance and research both nationally and internationally.” I still feel that their agreed upon final draft was too vague and thus less than satisfactory if their goal is to fight those who want all the Jews dead and Israel off the map!