You are here: Home / Archives for Ilhan Omar 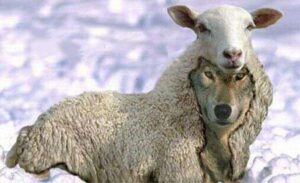 2020 has been a year that the world will remember even though all of us wish we could forget it. Inevitably and sadly, when the world goes through a crisis, there is always a segment of the population that will favor blaming the Jews for that crisis. So, it has been no different with the current Covid-19 pandemic, as some have irrationally accused Israel and the Jews of the virus. Conspiracy theories abound!

The result has been a global surge in acts of antisemitism. At the same time, people are trying to come to an agreement on some kind of an international definition for antisemitism in a concerted effort to fight it more holistically, and that is commendable. As it stands, most of the world has been adopting the United States Department of State’s definition that is as follows, “Antisemitism is a certain perception of Jews, which may be expressed as hatred toward Jews. Rhetorical and physical manifestations of antisemitism are directed toward Jewish or non-Jewish individuals and/or their property, toward Jewish community institutions and religious facilities.” I honestly find it surprising that The International Holocaust Remembrance Alliance (IHRA) adopted that same definition in 2016. Additionally, they were quick to clarify that it was a non-legally binding definition. In other words, these are just words.

But even then, that definition is a start, although I find it to be a bit vague or possibly too soft. When I hear “a certain perception of Jews, which may be expressed as hatred toward Jews”, I feel like the use of defining terms should have a bit firmer. For instance, I would have stated “a certain perception of Jews, which is expressed as hatred toward Jews”, because I have yet to see any iteration of antisemitism not being hatred of the Jews or Israel. Then, the definition goes on to say that antisemitism can be “rhetorical and physical”, and we know that to be true, but by introducing the idea that antisemitism may be expressed as hatred, we now open the door to the possibility that rhetorical or physical acts of antisemitism may not be hateful and thus, could be justified. Simply stated, this definition is too soft and too vague. But this is not the only challenge with trying to combat antisemitism. We also have to look at who is speaking against the oldest hatred and how they are possibly spinning the concept to fit their agenda.

When a conference or seminar is organized, it is common sense to gather a panel of the foremost experts on the topic at hand. The last thing that the organizers want to be accused of, is that they have gathered a panel of people who have not earned the right to speak on any given topic. You would not gather a group of white supremacists or KKK members to speak on the ills of slavery, just like you would not ask a group of neo-Nazis to speak on Israel’s right to exist. In reality, such gatherings might take place, but nobody would take them seriously, let alone attend the conferences. Well, you would think so, but this is 2020 after all, and the sky is the limit when it comes to the irrational, and when the working definition of antisemitism is non-legally binding, strange things can happen.

So, when I found out that a webinar-panel discussion was scheduled for mid-December, on the topic of  “Dismantling Antisemitism, Winning Justice”, I got excited, be it for a very short moment until I realized who was on the panel. I expected experts like Manfred Gerstenfeld, the Israeli former Chairman of the Steering Committee of the Jerusalem Center for Public Affairs, who also founded and directed the Center’s Post-Holocaust and Anti-Semitism program, or maybe Deborah Lipstadt an American historian,  author and Dorot Professor of Modern Jewish History and Holocaust Studies at Emory University in Atlanta, Georgia. These people are just two of many experts I can think of on the topic of antisemitism.

Well, imagine my surprise when I found out that the webinar on dismantling antisemitism will be led by Congresswoman Rashida Tlaib, Marc Lamont Hill, Peter Beinart and Barbara Ransby. This would provide great material for a Saturday Night Live skit if the topic wasn’t so tragically serious. 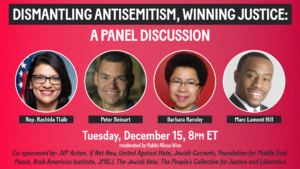 Rashida Tlaib just finished participating in a conference titled ” Against All Odds: Palestine beyond 2020“, organized by American Muslims for Palestine. She was also joined by congresswoman Ilhan Omar and terrorist supporters like Hatem Bazian or Tarek Hamoud who has is tied to Hamas. At the end of the conference, Miss Tlaib retweeted “From the River to the Sea, Palestine will be Free ” which is a euphemism for the total destruction of Israel and all Jews.

Marc Lamont Hill was employed by CNN until he made some very antisemitic comments and also claimed that we all need to strive for a free Palestine from the river to the sea. Additionally, he was part of a fundraiser for a known terrorist.

American Jewish journalist Peter Beinart is also on that panel. He has called the Jewish state a cancer. He goes as far as comparing modern Israelis and American Jews to Nazis against the Palestinians. Yes, Mr. Beinart is Jewish! Whatever that means to him.

Barbara Ransby is a professor in Chicago and she supports terrorist Rasmea Odeh. She has also promoted violent protests against Israel.

These will be the four speakers on this panel dedicated to the dismantling of antisemitism. Is this to be taken seriously? You better believe it is. These people really believe that they have a message that can make a difference. Maybe they think that by eradicating Israel and eliminating all Jews, antisemitism will cease to exist. After all, “no more Jews” means no more need for antisemitism. What a farce! I find it hard to believe that anybody would take this webinar seriously, but then I looked at who was organizing such an event and I was shocked even further.

The event is co-sponsored by several “Jewish” organizations such as Jewish Voice for Peace, If Not Now, Jewish Currents and the Jewish Vote, among other groups. A quick perusal of these Jewish groups will reveal that they are JINOs or “Jewish in Name Only.” They actually are a disgrace to the Jewish people, the memory of the Holocaust and the modern state of Israel. These groups have proven to have no affinity for the people they claim to represent. They are very liberal organizations that in the name of social justice will quickly throw Israel and the Jews under the bus. They regularly claim that Israel is occupying stolen Palestinian land and that Jews are weaponizing antisemitism to their advantage.

We are told by the event website, “Join social justice movement and political leaders as they share what fighting antisemitism looks like to them and how it connects to their own liberation struggles. Panelists will address their own experiences of fighting oppression, how they learned about and have experienced antisemitism.” I cannot wait to hear how self-proclaimed Palestinian American Rashida Tlaib and African America Marc Lamont Hill have experienced antisemitism.

I am actually not sure if these panelists believe that they can solve antisemitism. Are they so delusional that they could see themselves as the providers of a solution against antisemitism, but still see Israel as a threat to the world and Jewish people as colonizers and murderers?  I realize that 2020 has been an upside-down year on so many levels, but to let wolves tend the sheep will never end well for the sheep. If these people are the experts on antisemitism, we are so doomed!