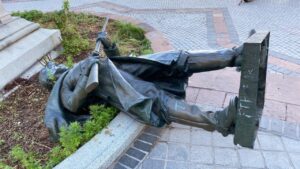 History has always been written with blood, sweat and tears, but never with disappearing ink. Unless you are H. G. Wells, armed with a pen, you cannot erase, ignore or alter the past. Unfortunately, this doesn’t seem to be stopping a wave of people across our nation, advancing a politically motivated cultural revolution. This American cultural tsunami has taken our country by surprise, but it didn’t happen in a vacuum. While I recognize that the protests are justified and that our system needs reform, I cannot understand or condone the riots, violence, looting or the accusation of “systemic racism.” Additionally, the bringing down of statues, paintings and other artifacts seems very far removed from the tragic murder of George Floyd.

There is a great danger in rewriting history, because it eradicates key events that future generations would end-up knowing nothing about. A powerful and sad example of that is what has happened with the Holocaust. A survey was taken in 2018 yielding terrifying results. Two-thirds of millennials in America do not know what Auschwitz was, and 25% do not know that six-million Jews died in the Holocaust. So, when historical revisionists creep in with their altered narrative, much of our young population doesn’t have the know-how or even the motivation to check the stories’ accuracy. Add to that the dwindling down of Holocaust survivors and pretty soon nobody will remember the Jewish catastrophe.

In a letter to General Dwight Eisenhower dated April 15, 1945, General George Marshall reported what he saw when he visited the concentration camp at Ohrdruf: “But the most interesting – although horrible – sight that I encountered during the trip was a visit to a German internment camp near Gotha. The things I saw beggar description. While I was touring the camp I encountered three men who had been inmates and by one ruse or another had made their escape. I interviewed them through an interpreter. The visual evidence and the verbal testimony of starvation, cruelty and bestiality were so overpowering as ·to leave me a bit sick. In one room, where they were piled up twenty or thirty naked men, killed by starvation, George Patton would not even enter. He said he would get sick if he did so. I made the visit deliberately, in order to be in a position to give first hand evidence of these things if ever, in the future, there develops a tendency to charge these allegations merely to propaganda.”

General George Marshall’s discernment was very sobering. It is mind boggling that after witnessing such horrors in the camps, anybody would entertain the idea that one day, people would deny it or change the narrative to serve their own agenda. But almost prophetically, General Marshall saw the horrors of the Holocaust as potentially being denied, minimized and forgotten. It has only been seventy years, and a large percentage of our current youth doesn’t know what took place during the years of Nazi Germany. This is a chilling reality!

I do not like this part of history any more than an African American likes the horrible US legacy of slavery or a Native American likes the carnage that his ancestors endured when the first pioneers set foot on what became the USA. Likewise, I do not like the Holocaust years because of their bloody legacy in general, and because of the loss I experienced in my own family in particular. My maternal grandfather Maurice Weinzveig was taken during a round-up in Paris in the summer of 1942, sent to Auschwitz. He perished in the smokestacks, one of the six million Jewish Holocaust victims. I wish this never happened, but I cannot erase it from either my memory, my family’s collective memory or history. You do not see me destroying German property, loathing anybody German or even boycotting companies that were instrumental in the development of the systematic attempt at the destruction of all European Jews. Allow me to elaborate.

What about IBM and the Holocaust? Most people are completely unaware of the fact that IBM, with the help of German inventor Herman Hollerith, was instrumental in tallying and identifying Jews all over Europe.  In 1933, computers didn’t exist, but the IBM punch card system was developed and used by Nazis for “the Final Solution to the Jewish Question.” This all happened with the full knowledge of the IBM New York headquarters. It is terrifying to think that the Nazis were that organized, but the fact remains that many concentration camps inmates were registered upon entry with punch cards compatible with the IBM system. It is another part of history that is despicable and that I wish I could erase, but I cannot. You also don’t see me boycotting or destroying IBM property. By the current logic, I should go around and destroy any IBM computer I can get my hands on, just because IBM was instrumental in the killing of six million Jews and six million additional victims. This is absolutely ridiculous! Shame on IBM for their involvement in the Holocaust, but please, do not campaign for the destruction of all things IBM.

What about the Ford Motor Company, founded by Henri Ford, a proven antisemite who was admired by Adolph Hitler? In a previous article, I already made the point that the Ford Motors Company of 2020 is not that of 1920, but the founder’s name “Ford” remains in the name of the corporation. By the current standards, should we ask that the company be renamed because of the ugly, xenophobic past of its founder? And if we were to be consistent, we should also tear down the statue of Henri Ford located in River Rouge Michigan. Then you have the case of Father Charles Coughlin, the antisemitic Catholic Priest of the 1930s who used his very popular weekly radio broadcast to spew his venom on the air waves. Should we ban Catholicism and destroy all Catholic Churches and statues? What about Charles Lindbergh involvement with Hitler, Göring and even his consulting for the Luftwaffe (German Air-force)? Should we take down his statues in Minnesota, California, Georgia and other locations? Do you see where this is going?

It is much more important to tell it like it is and warn people about the ugliness and danger of racism and antisemitism than to topple any statue. Bringing a statue down will not stop people from being racist. Educating people on how to fight racism will go a lot further. Granted it is painful to relive parts of history for the purpose of teaching it to the next generation, it is crucial to do so. Following the logic–if you can call it logic–used by protesters and rioters today, all that they deem offensive must be destroyed. But where does it end? It simply doesn’t because various people will keep getting offended by all sorts of things that have taken place in history. Rewriting history is ignoring the problem and ignoring the problem doesn’t make it go away. Teach history, teach the good the bad and the ugly history so that it can be identified, condemned and alleviated in the future. The alternative is an Orwellian universe that even those pushing statues off their pedestals today, do not wish for tomorrow. There is still time to stop the suicide of Western Civilization, but the clock is ticking!