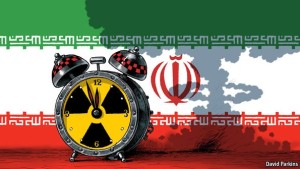 In the midst of a global crisis involving Iran’s race for nuclear power, Benjamin Netanyahu was re-elected for another two-year term. The landslide victory showed us that Israel isn’t so fed-up with Bibi’s policies. It actually proved that Israelis are very concerned about the Iranian threat and feel that Bibi is the best man to handle the crisis.

The Lausanne “Agreement”–if we can call it that–has left much to be desired. It transforms the West from an inspector into a powerless spectator. Iran’s carefully crafted nuclear “smoke and mirror” show is supposed to appease the international community, so we hear from the media and President Obama.

In a recent interview for NPR, Mr. Obama delivered a 22 minutes promotional piece on the exciting deal that is being made with Iran. I would say that it was more propaganda than promotion. While he seems to denounce anti-Semitism, Mr. Obama doesn’t see the need for Iran to recognize the existence of Israel as part of a viable deal as he said: “So there’s still going to be a whole host of differences between us and Iran, and one of the most profound ones is the vile, anti-Semitic statements that have often come out of the highest levels of the Iranian regime. But the notion that we would condition Iran not getting nuclear weapons, in a verifiable deal, on Iran recognizing Israel is really akin to saying that we won’t sign a deal unless the nature of the Iranian regime completely transforms. And that is, I think, a fundamental misjudgment.“

Mr. Obama’s dismissal of Israel’s safety goes along with the recent disclosure of a Department of Defense top-secret document exposing Israel’s nuclear information. There were several other countries’ sensitive nuclear information on that 360-pages document. Somehow, they were all redacted out of the document before its release, to leave only Israel’s information readable. To be sure, Israel’s nuclear capability is no news to the world, but this was the first official announcement about it by a foreign state. How could Mr. Obama possibly say that his administration has done more for Israel than any other previous president? Unless of course he means that he has done more than any other president to put Israel in arms way…Don’t get me started on that one!

Yet Mr. Obama clearly wants us to believe that he is helping Israel when he says: “And as I’ve indicated before, if you look at my track record since I’ve been in office, we have had as much or greater military cooperation and intelligence cooperation with Israel than any previous administration. We have been steadfast in the defense of Israel when it comes to them defending themselves, even when there have been periods of great international controversy.”

It looks to me as if Israel is left with the decision to strike Iran if they feel that the threat is getting to close for comfort. Frankly, this is a decision that is currently better left on Netanyahu’s shoulders than any other Israeli prime minister. Additionally, I fear that the decision to strike Iran is no longer a matter of if but simply when! Iran knows how to play the clock. Deal or no deal, they continue to see the time span as a great opportunity to continue with their nuclear program with very little outside control. This will allow Iran to acquire the capability to build a bomb a lot sooner. For all we really know, Iran might be a lot closer than we think to become a nuclear lethal force.

The real danger that isn’t discussed much is the fact that we are now in a stage of what has been called “Apocalyptic Islamism”. There is very little if anything that the West can do to stop the raging hatred and determination of the mullahs in bringing in the “Twelfth Imam”. Both ISIS and Iran–while not necessarily working hand in hand–have a common goal of Islamic global hegemony painted on a backdrop of End-Times with the blood of the “infidels”. Of course, Iran also helps fulfilling Hezbollah’s agenda by proxy.

This really leaves only one option, and that is the physical destruction of Iranian nuclear facilities–a feat that only Israel seems to be willing to undertake. Of course, once the big boy on the Middle East playground has pushed the bully over, the rest of the cowards will magically appear on the scene. Then we might see an overnight alliance of powers who up to then didn’t have the chutzpah to go after the Khameini regime. Even Mr. Obama might join the ranks of those who oppose Iran at that time.

It appears to be “damned if you do and damned if you don’t” for Netanyahu, but since Israel’s survival is a non-negotiable, It might just be a matter of time before Bibi makes a move. He certainly is facing some of the toughest decisions of his entire political career and could certainly use the prayer of those who love Israel.

Preventing Iran from going nuclear ISN’T ONLY A MIIDLE EAST PROBLEM, it is a global one. Ignoring a problem never made it go away, but we are being told than Iran is on the road to full compliance. Is it on that very road that they also shout “Death to America” and “Death to Israel”. Global leadership isn’t necessarily measured in GNP or a country’s worth anymore. It might be measured more by the ability, willingness and determination to avoid a nuclear cataclysm at any cost. In the case of Iran, I think that only Israel has got it and only Bibi can lead them into making such a decision. I still pray for all of it to be averted because any loss of life is a tragedy. Jews and Muslims alike need to be touched by God and meet their Messiah and redeemer (Isaiah 52:13-53-12). The Bible does shed some light on all of this.

There is a promise from the God of Abraham, Isaac and Jacob that He will not only protect Israel but also destroy her enemies. This eschatological promise is based on God’s unconditional and eternal Abrahamic Covenant with Israel and the Jewish people (Genesis 12:1-3) and it should be an encouragement and a call to prayer for those of us who support Israel.

In that day the Lord will defend the inhabitants of Jerusalem, and the one who is feeble among them in that day will be like David, and the house of David will be like God, like the angel of the Lord before them. And in that day I will set about to destroy all the nations that come against Jerusalem (Zechariah 12:8-9)