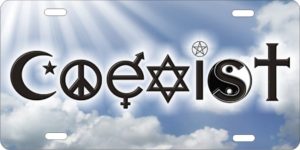 Co-existence requires tolerance, respect and compassion from all parties. These virtues are very biblical, even when people failed to make that connection. Outside of defending ourselves from our enemies, the Bible teaches us to respect our fellow men. The very fact that over the centuries people have twisted the Scriptures to justify their actions doesn’t make the biblical record into a manifesto justifying a destructive agenda.

Scripture tells us that the greatest commandment is to love God, and the second one is to love one another, “Love the Lord your God with all your heart and with all your soul and with all your mind. This is the first and greatest commandment. And the second is like it: ‘Love your neighbor as yourself. All the Law and the Prophets hang on these two commandments.” Yeshua even took it one step higher, saying that we are even to love our enemies. In Yeshua, we see the example of obeying the authorities, overcoming evil with good and standing for justice and healing for the helpless. These strong ethics have long been a strong foundation for Western civilization, even though the freedoms they have rested on have more recently been eroding.

Now, it seems that the group that is targeted the most is the Jewish people. To a degree, we are targeted by all the letters of the Coexist acronym; radical Islamists, liberals, LGBTQ, atheists and even some Christians. While each of these groups can and have displayed anti-Jewish sentiment, the most lethal is from Islam. People continue to be scared of saying it like it is, but the vast majority of the recent deaths in the Jewish communities of the world are from people who at the very least call themselves Muslims.

How do we co-exist when one party worships death and the other party values and respects life? It is literally impossible unless the meaning of co-existence becomes redefined, which is exactly what radical Islam is trying to do. If tolerance becomes a one-way street, we are then forced into tolerating an ideology that is foreign to western values.  In essence, we are tolerating the intolerant, and that leads nowhere but down the spiral of civilizational demise. So, no, I don’t believe we can co-exist unless we share similar values.

When I moved to the United States from France in the mid-1980s, I was looking forward to integrating into the American way of life and American culture and customs. I eventually became an American citizen, even though in the privacy of my own home, I enjoy French food, music, movies, literature, customs and language. I can c0-exist in America as a French expat, even though I am legally American now. My co-existence is based on the respect of others and the price I place on human life and dignity (all of them biblical values by the way.)

When I say that we cannot co-exist, some will quickly succumb to the temptation of labeling me a racist. That’s inevitable, but that is also inaccurate. The only group that I believe we can not co-exist with is radical Islam, and they have proved over and over that they don’t play well with others. But, please don’t call an Islamophobe a racist, because ISLAM IS NOT A RACE! Islam is an ideology that includes a religion among other things. There are Muslims all over the world, and their ethnic origins have nothing to do with their indoctrination or lack of. I also do not want my statement to be seen as an invitation to exclude, expel or exterminate. This was done to my people in the 1930s and 1940s, and we know it didn’t end well. We just need to be more careful about what we allow people to get away with.

I am greatly concerned about the lack of discernment that our world is showing. I am not even speaking of biblical discernment here, but simply of the ability to detect if people mean what they say and say what they mean. If Islam is indeed the religion of peace, where are the millions of “moderate’ Muslims when a voice needs to be heard to fight anti-Semitism? Radical Islam has given other Muslims a bad rep, but that could easily be rectified if the “other Muslims” would speak up against the abusers. I just don’t see it happening except in a very few cases, and I mean a handful!

To quote a Russian proverb that was made famous in English by Ronald Reagan, “Trust, but verify!” I want to play well with others and I want to give them the benefit of the doubt. Forgive me for checking their intentions. I want to co-exist, but I am not sure we really can anymore, at least not in the pure sense of the term.