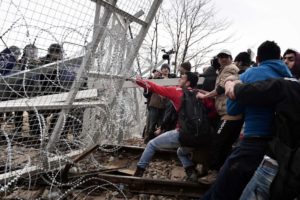 Most people have heard about the Great Wall of China, started in the 7th century AD and continued for almost 1,000 years. It was built to originally protect China from repeated Eurasian invasions and continued to be used for border control over the centuries. It measures over 13,000 miles, which is no small feat.

A much smaller wall is currently being erected in the northwest part of France in the town of Calais. It has already been dubbed “The Great Wall of Calais.” This new wall is being completely financed by recently “Brexited” Britain, hoping to protect their autonomy and borders from unwanted, illegal migrants. Calais is situated on the shores of northwestern France and has been a seaport connection between the UK and France for a very long time. Much business has been generated through that two-way venue, as well as much human traffic for work, tourism AND immigration. But lately, it is the immigration aspect of the human ebb and flow that is attracting attention. Britain is worried by the constant influx of African and Middle-Eastern migrants on the shores of Dover.

Thousands of recent migrants congregate in Calais in an area known as “The Jungle.” It is unsafe, unsanitary and very difficult to control. France appears determined to put an end to the camps. In the meantime, Britain is building the wall and “flipping the bill.” Reaction to this 4 feet high mass of concrete along both sides of the road leading to the port has been less than favorable. Even though the wall won’t come to completion until the end of 2016, many think that it is a waste of time, space and money. But the concern is real as migrants build barricades daily to slow down the many trucks on that road and hitch a ride to the other side of the Channel illegally. The area has even been declared a “no-go zone” at night.

The Wall at Calais might or might not become a deterrent for illegal migrants; time will tell. In the meantime, it is receiving a lot of controversial press as well as many opinions about its efficacy or lack of. But one thing that nobody is too concerned about is the potential breech of human rights, unethical aspect of the wall or apartheid attitude of France and/or Britain, like let’s say…..Israel!

Israel has been working on their security fence/wall for several years since 2003. Hundreds of lives have already been saved because of the fence. It has been a very difficult diplomatic and political battle for Israel, constantly accused of being an “Apartheid State.” Comparing Israel to South Africa is far from honest since Apartheid in South Africa was based on racial tension and falsely assumed elitism, while Israel has been building its wall solely for security reasons. Protecting Israeli citizens–which incidentally include many arabs–has been at the forefront of the wall agenda. I am convinced that if Palestinians stopped the bombings, stabbings and suicide attacks, the wall could and probably would go down.

The double-standard used regarding the building of walls (including the recent one started by Saudi Arabia to also protect itself from ISIS terrorists) is upholding. France and England build a wall to protect themselves from illegal migrants who most likely include sleeper ISIS members, and that’s OK! Saudi Arabia builds a 600 miles wall to keep ISIS out, and that’s OK! So why is Israel building a wall to keep terrorists out considered to be a human rights violation?

Israel is the ONLY Jewish state in the world. It is the Jewish State from a political perspective (1948), but from a biblical standpoint, it has also been the Jewish land for several thousands of years prior to that time. It appears as if the whole world is continuing to build its wall around Israel to ostracize the Jewish people into a 21st century ghetto. That’s the most unethical, dangerous and hateful wall of them all, but nobody really says a word or even cares about that one!