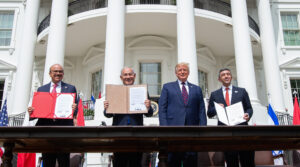 Don’t quote me wrong, I have no intention of minimizing the event that took place at the White House on September 15, 2020. It was truly historic! Considering the geopolitical crisis that has punctuated the Middle East since Israel’s birth as a modern nation on May 14, 1948, any Israeli/Arab peace treaty is a monumental achievement. There had only been two in 72 years. Egypt was the first in 1978 at Camp David under Jimmy Carter and between Anwar El Sadat and Menahem Begin. It was followed by Jordan in 1994, at the White House under Bill Clinton and between King Hussein and Yitzhak Rabin. Then came the 2020 negotiations in the Middle East under Donald Trump and his team, and the impossible took place; the United Arab Emirates declared that they would normalize relations with Israel and soon after them, Bahrain followed suit.

While nobody knows the details of what is to happen next, President Trump hinted at the fact that 5-6 other Arab nations are lined up to normalize relations with Israel. This is truly changing the entire dynamics of the Middle East. The Abraham Accords (Abraham being the father of both Jewish and Arab nations), as they are being called, are truly history being written in front of our very eyes. The positive aspect of such an event is most definitely welcome in 2020, a year that until now, could have been renamed “The year of all tragedies.”

In an exclusive interview with Vice President Mike Pence, Joel Rosenberg confirmed that the current administration desires to go the extra mile to strengthen US/Israel relations after they had been strained by the previous administration. Pence called Israel,“our most cherished ally” and said that “the president had decided from the very beginning of his administration that he was going to do everything he could to strengthen the U.S.-Israel alliance and try to advance peace.” What a departure from the shaky relations that the US had under Barack Obama! Incidentally, Pence also mentioned that it was Democrat President Harry Truman who recognized Israel literally moments after Ben Gurion had declared independence in Tel Aviv.

The Peace Treaties that were signed are very special because they open the door to more countries in the region, and that is a good thing. Additionally, they put Iran and the Palestinian Authority on notice. When more countries like Saudi Arabia, Oman, Sudan and others decide to normalize relations with Israel, the Middle East as we have known it for the last several decades will be a thing of the past. Iran, already weakened by major US sanctions, is seeing its hegemony of the region erode by the day. As to the Palestinians, their response to the peace deals was still typical of their ideology and agenda; they sent missiles onto Israel from Gaza. The consensus from the Palestinians is that “there will be no peace until Palestine is free.” For now, the Palestinian Authority has decided to dig its heels in the sand, but with a weakened Iran increasingly unable to finance Hamas and Hezbollah, the tide might turn soon. The Palestinian narrative might become irrelevant. Wow, I never thought I would say that in my lifetime! We are truly living as critical history is being written. It is about peace. But there is peace and there is PEACE!

Again, I do not wish to brush aside the momentous event that took place days ago, but I also want to bring some biblical perspective if I may. From a human perspective, nobody can argue that peace is good. The Bible tells us to get along with our fellow men whenever and however possible in Romans 12:18, “If possible, so far as it depends on you, live peaceably with all.” We are also told not to seek revenge or hold a grudge in Leviticus 19:18, “ You shall not take vengeance or bear a grudge against the sons of your own people, but you shall love your neighbor as yourself: I am the Lord.” So, there is definitely a biblical precedent for seeking peace with our neighbors. What about Israel? Does the Bible give us clues as to peace in the Middle East Region and the safety of Israel? I believe it does.

The first thing we must understand is that, from our limited human perspective, peace is simply the absence of war. This doesn’t make peace not worth seeking, but that is not the whole story. The peace we should be seeking is the one that comes from the Prince of Peace, Messiah Yeshua as He is called by that name in Isaiah 9:6 “For a child will be born to us, a son will be given to us; And the government will rest on His shoulders; And His name will be called Wonderful Counselor, Mighty God, Eternal Father, Prince of Peace.” Yeshua the Prince of Peace will return in the future to establish His messianic kingdom on earth as He promised. Isaiah goes further in describing what life will be in the messianic kingdom, under the just rule of Messiah, the Prince of Peace, in Isaiah 11:6-10 we read, “And the wolf will dwell with the lamb, And the leopard will lie down with the young goat, And the calf and the young lion and the fatling together; And a little boy will lead them. Also, the cow and the bear will graze, Their young will lie down together, And the lion will eat straw like the ox. The nursing child will play by the hole of the cobra, And the weaned child will put his hand on the viper’s den. They will not hurt or destroy in all My holy mountain, For the earth will be full of the knowledge of the LORD As the waters cover the sea. Then in that day The nations will resort to the root of Jesse, Who will stand as a signal for the peoples; And His resting place will be glorious.

We are told that the whole earth will be full of the knowledge of the Lord and that the wild will fellowship with the tame as never seen before. The prophet Ezekiel (Chapters 40-48) also tells us with great details about that future time in history when a beautiful Jewish Temple will be rebuilt in a New Jerusalem. That is what real PEACE will be all about, and anything but that is a thin veneer of “pretend peace” painted over a lost world in need of a Savior. The Bible also tells us that a false peace will exist, and while I recognize the incredible events of the last few days, biblically speaking, I still see the region undergoing turmoil. The door has been open for more peace in the Middle East and for Israel to start feeling more secure. Israel will have to feel more secure in order to let her guard down and agree to sign a seven-year treaty with a charismatic new world leader that the Bible knows as the Antichrist.

At first, the world will become mesmerized by this new figure. He is known by many names like “the little horn” (Daniel 7:8), “the prince who is to come” (Daniel 8:23), “the one who makes desolate” (Daniel 9:27) and “the man of destruction” (2 Thessalonians 2:3) to name just a few. He will rise to power very quickly (Revelation 17:13.) Possibly his biggest achievement in the eyes of men will be the covenant he will sign with Israel to bring complete peace to the region. This will allow the resumption of Jewish sovereignty on the Jerusalem Temple Mount (Daniel 9:27.) Needless to say, that this area of Israel is currently sitting on a powder keg with a very short fuse, so when he brings “false” peace, it will be received by many as real peace. That is not the end of the story, but soon after–three and a half years to be exact–this will be the end of peace on earth, as he will claim to be god and will require to be worshipped (Revelation 13:4-8.)

The antichrist will also gather all the nations against Jerusalem as seen in Zechariah 14:1-3, “Behold, a day is coming for the LORD when the spoil taken from you will be divided among you. For I will gather all the nations against Jerusalem to battle, and the city will be captured, the houses plundered, the women ravished and half of the city exiled, but the rest of the people will not be cut off from the city. Then the LORD will go forth and fight against those nations, as when He fights on a day of battle.” and also in Revelation 16:16, “And they gathered them together to the place which in Hebrew is called Har-Magedon.” and yet, this is still not the end of the story.

The false peace that the antichrist will bring to the world will come to an end, but so will the antichrist’s career of lies, abuse and rebellion against God. Finally, he will fight against Messiah when He returns to earth and he will be completely defeated (Revelation 19:19-20.) Additionally, he will be thrown in the Lake of fire and brimstone forever (Daniel 7:11; Revelation 19:20.)

So, truly, there is peace and there is PEACE! What we are seeing right now in the Middle East should be exciting from a human perspective, but even more so from a prophetic perspective since it opens the door for the rest of God’s program to unravel and for the return of the Messiah to rule the earth.

I recommend that we all keep one eye in the Word of God and one eye in the sky because Yeshua is coming soon to rapture the believers before the antichrist steps onto the world stage. Will you be coming with us or will you be left behind? Don’t wait too long to decide.

In the meantime, L’Shanah Tovah for a prosperous New Year!