You are here: Home / Archives for Audrey Azoulay 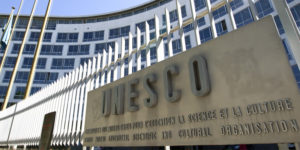 Just a few days ago, UNESCO voted to elect their next Director General to replace the current exiting Director, Bulgarian Irina Bokova. At the end of the process, it came down to two candidates: One from Qatar and one from France. The favorite was Qatari candidate Hamad bin Abdulaziz Al-Kawari, but he lost to French candidate Audrey Azoulay (30-28.) The UNESCO Director General’s position is a 5-year term , open to a second term.
UNESCO is an acronym for United Nations Educational, Scientific and Cultural Organization. Of the 195 countries members of UNESCO, 60 are either Muslim countries, members of the OIC (Organization of Islamic Cooperation), or observer members of the OIC. This constitutes almost a third of of the countries part of UNESCO. The fact that UNESCO has a strong anti-Israel bias cannot be denied and its strong Muslim membership might be a factor but it isn’t the ONLY factor. Many other countries represented, also have very strong anti-Semitic sentiment against Israel. The result has been a plethora of resolutions against Israel over the years.
in 2011, UNESCO officially recognized Palestine (107/14) and added the “new state” to its roster. Immediately after, the United States pulled its funding. Then, in 2016 UNESCO declared that the Temple Mount/Western Wall in Jerusalem had no Jewish connection and called it by its Arabic name, thus stripping it from all Jewish identity and opening the door for more violence between Palestinians and Israelis. Continuing on its campaign to delegitimize everything Jewish, UNESCO recently declared that Jerusalem had no right to be the capital of Israel. The vote took place on Israel Independence Day, making one wonder if the date was selected to further humiliate Israel.
The day before the vote to elect the new director, the United States expressed their decision to leave UNESCO over their flagrant anti-Israel bias. Within hours, Israel followed suit declaring that electing French AND Jewish candidate Audrey Azoulay was not enough to keep Israel as a member.
The United States, under the leadership of Donald Trump have been very vocal about their support of Israel. The electing of Nikki Haley has the US ambassador the United Nations has already yielded some amazing changes in favor of Israel. So it is clear that agencies such as the UN or UNESCO can be reformed in favor of a more balanced outlook on world affairs– something they were both started for. What Audrey Azoulay will accomplish as new Director General of UNESCO is yet unclear, but time will tell.
Miss Azoulay served as Minister of Culture (2016-17) in the François Hollande Socialist government. She arrives at a critical time for UNESCO and will have an uphill battle to restore credibility to an agency that has seen its integrity erode over the last decade. But the departure of both Israel and the US–outside of a great loss of financial contributions–might make matters worse for Israel. Two major voices of reason are lost in a community that clearly shows bold animosity against Israel. Miss Azoulay’s challenge will be to ensure that the remaining members will not continue to re-write history “sans Israel.” Her Jewish family heritage gives her an appearance of credibility, but it will be a long road to restore UNESCO’s credibility, at least among those who don’t try to re-write history.
As I see it, UNESCO is part of the global libel against Israel, easily pushed forward by an anti-Semitic community and even more easily accepted by many uneducated masses who couldn’t care less about authentic history.