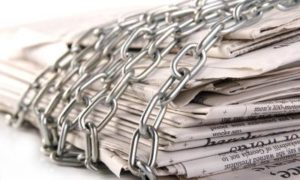 If a book has ever been published and is still in print, chances are you can find it on Amazon. There are millions of volumes available from the online giant in a myriad of languages. In perusing Amazon’s vast catalog, one is bound to run into books that they would disagree with, some that would rub them the wrong way and even some that are simply pushing the envelope too far. But this is what Freedom of the Press in America is all about. If you believe it, you can write about it, and if you write about it, you can publish and promote it. I value this freedom very much since I have written several books in the last two decades.

But exactly how far can we exercise our freedom to publish? The First Amendment of the US Constitution tells us: “Congress shall make no law respecting an establishment of religion, or prohibiting the free exercise thereof; or abridging the freedom of speech, or of the press; or the right of the people peaceably to assemble, and to petition the government for a redress of grievances.” This is of great value in America, considering that many countries are much more restrictive if not completely totalitarian in their approach to people’s freedom. This freedom is expressed through many writing styles.

One of them, satirical writing, can be traced back to ancient Egypt and has been used and perfected over the centuries. It includes humor, irony and sarcasm to tell a story and this is exactly what Assaf A. Voll used in the publishing of his recent book titled ” A History of the Palestinian People from Ancient Times to the Modern Era.“ The book is over 120 pages and all of them are blank. His tongue-in-cheek approach to the hot topic of Palestinian history quickly garnered him a top seller position on Amazon (#2 in the “Israel and Palestine” category.) Enough people thought that it was funny and left reviews on Amazon to catapult the book to #2. But apparently, many also were offended by the book’s approach to Palestinian history. His message was clear, when it comes to factual history, Palestinians have none prior the mid 1960s. One might agree or disagree with that message, yet freedom of the press guarantees that Mr. Voll’s book will be published and distributed, even on Amazon…at least for a few days!

Within a few days and under pressure, Amazon deleted the book from their catalogue claiming that the book “has been retired and is no longer for sale.” The book cannot be found either on Apple Ibooks or Barnes and Nobles site. Going back to Amazon’s decision to pull the book, one would tend to believe that the company has certain publishing standards that led to the cancellation, and that, in and of itself should be respected, if it is ethical and if the same standards apply for all books. But here is the rub…they don’t!

If you go to Amazon and look for a book like “The Protocols of the Learned Elders of Zion” you can purchase a copy from several suppliers. The book is supposed to comprise the minutes of several meetings held by important Jewish people regarding how they planned to take over the world. It was proven to be a hoax first published by Russian man Sergei Nilus in 1905, and since reprinted and distributed by many including Henry Ford. It has become a pillar in the edifice built on antisemitic literature and is still globally disseminated today. One Amazon page for the Protocols has a main review of the book saying” The entire world witnessed horrors that were unquestionably a direct result of the heinous prescriptions laid out earlier in the Protocols. To this day, almost a century later, the sweep of history has proven the Protocols to be genuine, authentic, and a real-life rendering of the most tragic events that have bedeviled mankind. One nation after another has suffered, and now the Zionist psychopaths have targeted the United States and Western Europe. The Protocols continue to ring true and sound the alarm. “

Is this an abuse of our freedom of the press? Is this worse than a book with blank pages? I will let you be the judge.

On a very different topic, and regarding a real piece of literature, you can also purchase a copy of Martin Luther’s 1543 work “On the Jews and their Lies” on Amazon. This small booklet was written by Martin Luther at the end of his life and was very abrasive against the Jews towards whom he had been rather friendly early on. In the book, Luther advises to burn synagogues, raze homes, confiscate holy books and forbid free passage among other things. He ends his treatise with powerful words against the Jews “My essay, I hope, will furnish a Christian (who in any case has no desire to become a Jew) with enough material not only to defend himself against the blind, venomous Jews, but also to become the foe of the Jews’ malice, lying, and cursing, and to understand not only that their belief is false but that they are surely possessed by all devils. May Christ, our dear Lord, convert them mercifully and preserve us steadfastly and immovably in the knowledge of him, which is eternal life. Amen.

This real book is still in print as part of Luther’s complete work. It brings chills down my spine when I read Amazon’s reviews of such work saying “On the Jews and Their Lies Luther’s magnificent defense of Jesus the Messiah and his exposé of the unfounded lies and accusations of the rabbis.” But freedom of the press is such that, as vitriolic as it might be, “On the Jews and their Lies” must be allowed in the Amazon catalogue. I don’t like it, but it is an undeniable part of history.

The point here is that Amazon seems to be using double standards when it comes to anything promoting Israel and the Jewish people or denigrating the Palestinian narrative, and it is a shame. Freedom of the Press has to either be all in or all out. We cannot allow it to be adjusted according to different agendas or flexing under pressure from different groups. Again, Israel is being singled out and targeted socially, culturally, politically and academically. I really hoped that Amazon wouldn’t be swayed by our postmodern view of Israel and the Jewish people. But it certainly looks like they are re-defining Freedom of the Press, at least for their catalogue. Maybe if more people who cared about the truth and an unbiased approach to information said something, then Amazon would listen. How will they know we care if we don’t speak up?

They have said, “Come, and let us wipe them out as a nation,
That the name of Israel be remembered no more.”
For they have conspired together with one mind;
Against You they make a covenant:
Psalm 83:4-5