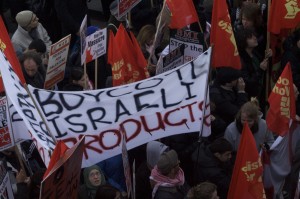 In my travels, I meet a lot of people from the Evangelical Christian community. Many of them have never heard of BDS (Boycott, Divestment, Sanctions) and frankly, this frightens me. This movement has picked up a lot of momentum in the past few months and has become quite pervasive.

I find it ironic that most of the people taking such a political stand have very little knowledge of how it got started and by whom. This decade old movement was started in 2005 by the Palestinian civil society. They claim that Israel must meet three obligations for BDS to stop:
1. Ending its occupation and colonization of all Arab lands occupied in June 1967 and dismantling the Wall;
2. Recognizing the fundamental rights of the Arab-Palestinian citizens of Israel to full equality; and
3. Respecting, protecting and promoting the rights of Palestinian refugees to return to their homes and properties as stipulated in UN Resolution 194.

Too often, there is an unspoken expectation from the Palestinian side. There is a great effort made to misinform or simply not inform the people they are trying to influence. I think there is a word for it; it is “propaganda!” The hope is that most people would accept the lies and historical revisionism simply as facts, and too often they do! UN Resolution 194 contains one short paragraph out of 15 on compensation to refugees, not even Palestinian refugees in particular, but refugees in general. I wish people would take the time to verify statements before they buy them and then sell them back as facts. It was Abraham Lincoln who once wisely said:” Do not believe everything you read on the Internet.” Get my point?

BDS was borne out of a Palestinian desire to enroll otherwise unengaged and apathetic people in their fight against Israel. The Palestinian Authority and Hamas’ goal might be the total destruction of Israel, at the end of the day you can only bomb and kill so many people before the more reasonable people in the world turn on you–although it seems that lately the “killing limit” might have been increased.

But what if you could get support from different groups of people, this would greatly help your cause, wouldn’t it? BDS does just that and it does it well, in the government, the universities (here and here) and even some Christian denominations such as PC USA (the same PC USA  that unsuccessfully tried to blot out “Israel” from their prayer and hymn books in 2014).

Anybody can feel good refraining from buying Israeli products. This seems like a peaceful and worthy protest that could make a difference and force Israel away from occupation and apartheid. Of course, the current BDS supporters are plagued with decisions to Boycott that forces them to be very inconsistent at best. Divestment is usually a matter of reinvesting your funds elsewhere, and there are plenty of opportunities for such a move. When it comes to boycott, it is a bit trickier. They will gladly stop buying Jaffa® oranges or Osem® cookies from Israel but don’t ask them to stop using the Intel® chip in their personal computers or their mobile phones all together (both originated from Israeli ingenuity).

It is often the same people who choose to boycott Israel who also completely ignore the blatant abuses of human rights by countries like Russia, China, Yemen, Syria, Qatar and many more. The same people also irrationally ignore Hamas’ abuse and murder of their very own people like in the case of the 2014 Gaza War.

BDS is most rampant on US university campuses. As a matter of fact BDS is the main weapon used on US campuses to delegitimize Zionism and demonize Israel. Anti-Israel proponents are organized, eloquent and very resourceful. After visiting several US campuses, Haaretz reporter Ari Shavit recently concluded: ” Zionism has failed to provide “a reliable, relevant and inspirational narrative” to counter the “near-overt anti-Semitism” of the BDS offensive. “And when they arrive on campus and are exposed to anti-Israel venom, the Jewish and pro-Israel identity of many of them collapses.”

They often nip the pro-Israel narrative in the bud, even though their own narrative is flawed and biased.

• BDS uses a false premise of Israeli occupation and apartheid policies. It is our responsibility to expose their lies and educate those who don’t know BDS or who believe that it is a cause worth fighting for.
• BDS proponents are inconsistent in their boycott and need to be made aware of their hypocrisy and/or ignorance about Israel’s contribution to the modern world (and the list keeps growing everyday), not to mention everyday products used by millions.
• BDS sends the wrong message to a lot of people thinking that they are helping to make the world a better place when in fact they are supporting terrorists.
• BDS counts on people’s ignorance but desire for justice to sell their falsified agenda of Palestinian victimhood.

Yet in spite of all the efforts made by BDS and its proponents across the globe, their true colors are starting to show. AIPAC very recently backed an amendment to a trade bill that would make BDS’ destructive progress more difficult within Congress. Additionally, the Illinois State House of Representative unanimously (49-0) passed an anti-BDS bill recently. The bill would stop pension funds from investing in companies that participate in the BDS movement. Bravo to both!

Laurie Cardozo-Moore of Proclaiming Justice to the Nations (PJTN) is also very vocal and active in exposing and fighting BDS. Cardozo-Moore calls BDS anti-Semitism and I fully concur. Looking at the unbelievable one-sidedness and hypocrisy of BDS, we can only deduce that it is more than a political attempt at bringing justice and equality. BDS is proving to be the politically correct way to hate Israel!

A great resource to fight BDS can be found at stopbds.com. Even though it is meant to equip students, most of it is very helpful to equip people eager to learn the truth and apply real fairness and justice.

Another thing we can do is to make sure that buy Israeli products in the USA to beat the BDS proponents at their own game. Here is a partial list of what BDS wants you to boycott. While my mentioning of this list doesn’t mean that I endorse all of it, you will undoubtedly find plenty of brands that you already support, just review them, keep at it and tell others. This is the least we can do.

What BDS proponents and victims too often have in common is a lack of a biblical approach to Israel and the Jewish people. Biblical truth provides a solid foundation for Israel. It describes a people created by God through Abraham, Isaac and Jacob and the twelve tribes of Israel as well as precise land boundaries starting early in Genesis 12:1-3 and continuing through chapters 15, 17 and following. Zionism isn’t this evil colonialism feeding on Arab blood, but without a biblical backbone, Zionism lacks the strength to fight the hypocrisy, hatred, and double-standard of the BDS campaigns around the world.

BDS relies on the Bullying, Delegitimizing and Slandering of Israel and does it on a foundation of lies that can be debunked.  If truth matters to you as much as it does to me, join me and speak up!